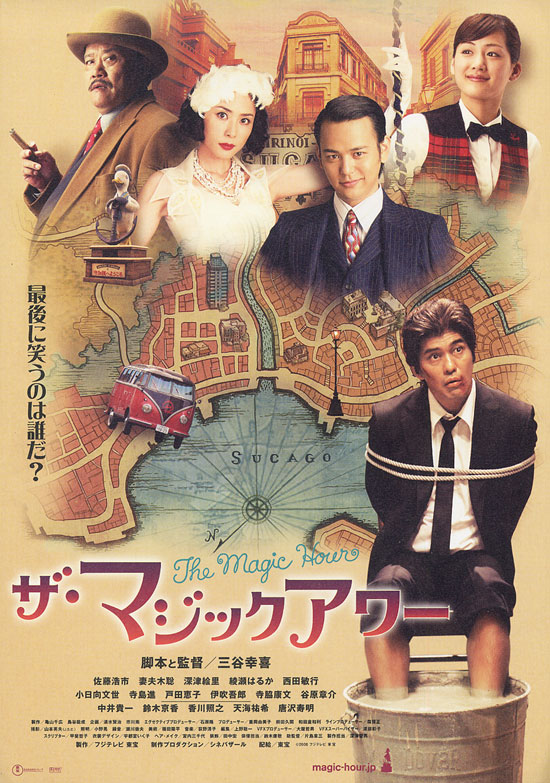 Bingo (Satoshi Tsumabuki) has stolen away the girlfriend (Eri Fukatsu) of his crime syndicate boss (Toshiyuki Nishida), and now he faces an ultimatum: find him a legendary assassin named Della Togashi, or die. But time is running out and Della’s whereabouts remain moot. As a desperate measure, Bingo decides to hire a failing actor, Taiki Murata (Koichi Sato) to play the part of the elusive assassin. Believing he’ll be starring in an epic gangster film in the role of his life, Taiki comes to the port town of Sucago, where the film is to be shot. In his attempt to convince his boss that he has found Della Togashi, Bingo inadvertently winds up indenturing Taiki into the service of the town’s crime syndicate just as it prepares for a major gang war. 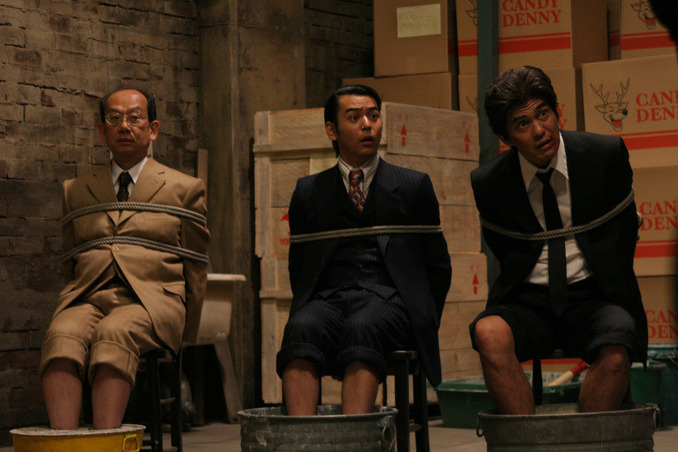 Ki Dec 04 2008 10:25 pm After a string of hits in Japan “Welcome Back, Mr. McDonald,” “All About Our House,” and “The Wow-Choten Hotel,” Koki Mitani returns for his fourth film titled “The Magic Hour.” As you can by now expect from a Koki Mitani film, “The Magic Hour” features a large cast of characters involved in a mixture of screwball comedy and heart warming moments. This around the time the film is in the fictional town of “Sucago,” where its ties with the past are alive on every street corner and honorable gangsters run amok in the town.

Noboru Bingo (Satoshi Tsumabuki) is the nightclub manager for “The Red Shoe,” the very same nightclub where the local crime boss, Konosuke Tessio” (Toshiyuki Nishida), met his current girlfriend Mari Takchiho (Eri Fuatsu). Noboru Bingo has since then brazenly struck up an illicit affair with Mari Takechiho right under the nose of the feared crime boss. Unfortunately for Noboru, Konosuke’s top henchman, Hiromi Kurokawa (Susumu Terajima), comes storming in while the couple are in the midst of an afternoon tryst.

Noboru then finds himself tied up in the basement of Konosuke Tessio’s main office and fearfully awaits meeting the crime boss. When he arrives in Konosuke’s office, he finds that Mari Takechiho has already thrown him under the bus and has acknowledged having an affair with Noboru Bingo.

Before, the gangsters can takeout Noboru, he concocts a plan that just may save his life. He overhears the gangsters mentioning the unknown whereabouts of a “Della Togashi” and Noboru claims to be personal friends with Della Togashi. The crime boss then gives Noboru five days to bring Della Togashi to him or else.

Noboru is temporarily set free but finds himself in deep trouble. He doesn’t know who Della Togashi, nor has any clue on his whereabouts. Noboru is further shocked to learn that “Della Togashi” is a legendary hit-man, who is just as famous for making his whereabouts unknown. This then causes Noboru to hatch a second plan, one that’s even more daring then his first ruse. Noboru decides to hire a second-rate actor to play the legendary Della Togashi.

With that tantalizing premise, “The Magic Hour” sets out to make you laugh continuously, while also introducing warm fuzzy moments for the golden age of cinema. While the ruse of the second-rate actor impersonating a gangster plays out, laughs are dished out furiously, but peters out for the film’s second half. The film then emphasizes its appreciation for earlier films and the type of honor those characters always possessed. Fans of “Cinema Paradiso” and what not, will enjoy these moments more so.

The cast, as mentioned earlier, is vast and features very impressive performances by Koichi Sato, Tohiyuki Nishida, and Susumu Terajima. The film’s main star, Satoshi Tsumabuki, is his usual affable self. He never really takes over the screen like Sato, Nishida, and Terajima does, but he doesn’t detract from the film either. There’s also promising performances by Haruka Ayase (wish we could have seen more of her), Teruyuki Kagawa, and Fumiyo Kohinata. The crime boss’ lady friend (played by Eri Fukatsu), one of the more pivotal characters in the movie, was the weak link in the film, not having the depth to make her unpredictable character as believable as the rest. Noted film director Kon Ichikawa, who sadly passed away this year, makes a came appearance as well.

Although “The Magic Hour” doesn’t connect the same way that “The Wow-Choten Hotel” does, the movie still offers a whole lot for film goers to enjoy. The alluring set is also worth gazing at, while the crazy screwball premise makes you laugh out loud on multiple occasions. The film’s more personal moments, especially its nostalgia for earlier periods gone by, doesn’t strike a nerve as much as it should, but when you’re having as much fun as “The Magic Hour” dishes out, I guess its hard to just stop and get sentimental without having some kind of discord. The film also makes a nice connection with the movie’s title “The Magic Hour” (which refers to the moments between dusk and nightfall) and moments in the character’s lives, which also represents their own personal magic hour.