The Longest Night in Shanghai 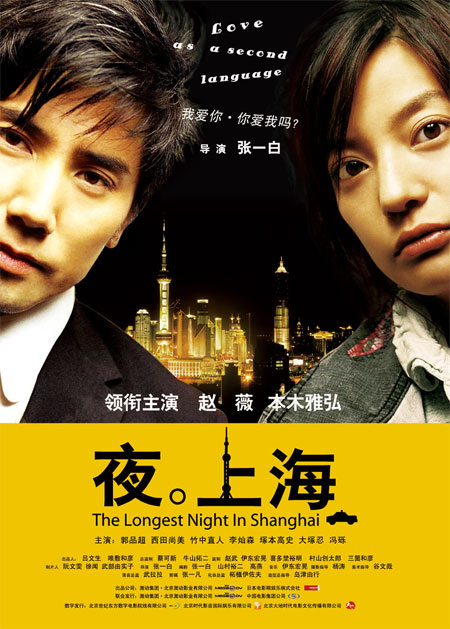 Mizushima (Masahiro Motoki) is a top-notch make-up artist who has come to work in Shanghai, along with him is his manager and lover Miho (Naomi Nishida). One evening Mizushima is wandering around alone, when suddenly he is knocked over by a bashed-up taxi, recklessly driven by Linshi (Zhao Wei). Linshi apologies and ushers Mizushima into her cab. Mizushima thinks he¡¦s getting a free guided tour but in fact Linshi is thinking she can make a quick buck from this foreigner. So begins their "misguided" tour of Shanghai. In the process the pair slowly begin to reveal the depths of their hearts. Their lives connected, bridging cultures separated by languages and borders. It is the beginning of a truly wonderful evening, a very special Shanghai night...

Ki Nov 29 2008 4:00 am After watching “The Longest Night in Shanghai” one may wonder why there aren’t more Pan-Asian films like this made. The movie is unabashedly romantic, has all of the pure gloss found in Asian commercial films, and wins you over with an ultra-impressive performance by Vicki Zhao, the Shanghai backdrop and competitant helming by Yibai Zhang. The movie itself is a co-production involving Japanese Movie-Eye Entertainment and Chinese Shanghai Film Studios. The cast is a near 50/50 split with Chinese actors (Vicki Zhao, Sam Lee, Dylan Kuo, Xinyi Zhang) and Japanese actors (Masahiro Motoki, Naomi Nishida, Naoto Takenaka, Shinobu Otsuka). Yet the film is distinctly placed in the illustrious city of Shanghai and exudes all of the charm that city has to offer without resorting to travel bochure like tackiness.

Japanese Naoki Mizushima (Masahiro Motoki) is one of the most sought after make-up artists in the world and travels to China to work the Shanghai Music Awards. He’s reached the pinnacle of his work career, but hitting bottom in a dry 7 year long personal relationship.

After finishing his work at the Shanghai Music Awards, Naoki impulsively takes a night time stroll out into the Pudong area of Shanghai. Eventually he makes his way past the Bund and into an adjoining neighborhood with outdoor muscians. While listening to one street performer, Naoki suddenly gets hit by a taxi cab.

The taxi cab driver is the tomboyish Xi Lin (Vicki Zhao). Xi Lin has a knack of getting into minor accidents (often purposefully to see the mechanic she is in love with) and this time she finds herself in quite a bit of scare. Fortunately, Naoki slowly regains consciousness to Xi Lin’s relief.

Xin Li then conjectures that Naoki is a tourist and offers to give Naoki a tour of Shanghai. She doesn’t know that Naoki is without his wallet and Naoki mistakenly agrees to go for the tour ride. Although they can’t speak the same language, they gradually learn the true meaning of love over the course of one long night in Shanghai.

The appreciation that movie helmer Yiabi Zhang has for the city of Shanghai is all so apparent in the lensing of the film’s backdrop. Basically staying in the Pudong/Bund area of Shanghai and venturing out occasionally to the French Concession area, the movie hits all the right notes to give viewers a taste of what that wonderful city has to offer. Interesting enough, Yibai Zhang previously directed the Shanghai segment of the Chinese/Japanese omnibus film “About Love.” Meanwhile Yuji Yamamura, one of the screen writers in “The Longest Night in Shanghai,” was the co-writer for the 2004 Chinese/Japanese film “Last Love First Love” also set in Shanghai. So yeah there’s a lotta love for that city in this movie.

Meanwhile, Vicki Zhao gives one of her most charming performances ever. She plays the love-struck tomboy, having a quintessential Asian “one-sided” crush with a mechanic and she’ll just steal your heart. From the flashes of playfulness (playing the keyboards with her neighbor yelling to stop) to the somber moments when she realizes her love is getting married with someone else, to the charming broken English banter she has with Masahiro Motoki she shines as much as the city of Shanghai does in this film. Co-star Masahiro Motoki’s performance was noticeably weaker, never approaching the likableness of Zhao’s performance. Usually, saddled with a stoic (some would say “wooden”) demeanor, he gave more of the stereotypical Japanese male businessman performance, rather than the flamboyance a make-up artist should have had.

“The Longest Night in Shanghai” doesn’t do everything well. The movie’s many sub-plots all lacked the polish of the main storyline, Masahiro Motoki’s performance was a few magnitudes less appealing than Vicki Zhao’s performance, and with the movie’s super appealing set-up you did expect more from the movie’s finale. Yet, you have Vicki Zhao giving one of her best performances ever (so charming in this film!), the contagious feeling of love blossoming right before your eyes, the heartfelt downsides of “one-sided” romances, and an obvious (at least for myself) love affair with the city itself. If I was Siskel or Ebert this just about the time where the “two thumbs up!” would come in.