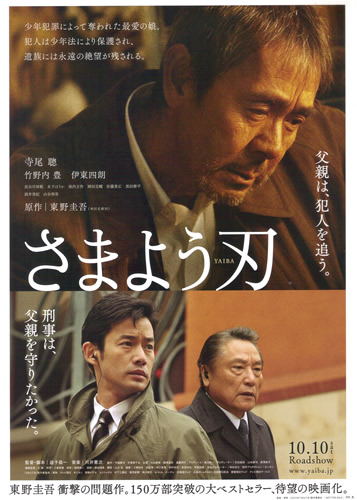 A middle school aged girl is dragged into a car while her screams fades away into the darkness of the night. The next day, the young girl's body is discovered along the Arakawa river. Detectives Takashi Oribe (Yutaka Takenouchi) and Shinichi Mano (Shiro Ito) arrive on the scene and discover that the girl was drugged and sexually assaulted before being brutally murdered. Shortly later, the girl's identity is discovered. Her name is Ema and she is the only daughter of Shigeki Nagamine (Akira Terao). Shigeki Nagamine is then called in to the station to identify her body. After identifying the body of his only daughter Shigeki loses the will to live.

Shigeki enters the empty apartment of Tomotaki and discovers a video tape containing two men drugging his daughter and then brutally assaulting her. Shigeki is now enraged. Atsuya Tomotaki then enters his apartment. Shigeki stabs Tomotaki to death with a knife, but before he is killed, Shigeki finds out the whereabouts of his accomplice Kaiji Sukano.

Det. Oribe and Det. Mano receives a letter from Shigeki Nagamine confessing to the murder of Atsuya Tomotaki. He writes that because the young men were minors they would have likely gotten light sentences. No matter what, Shigeki cannot forgive the men for what they did to his daughter. The detectives must now track down Shigeki who is a wanted fugitive, while Shigeki hunts for Kaiji Sukano.