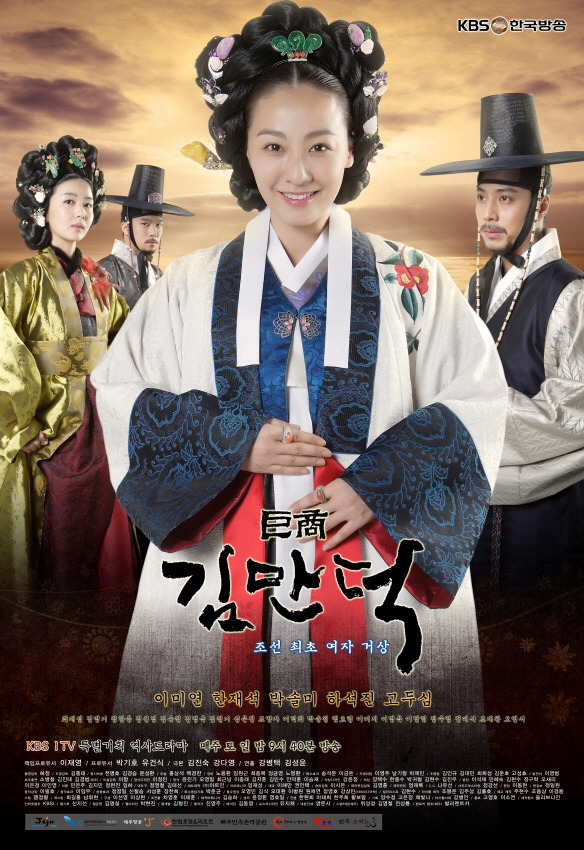 Man Deok-Kim (Lee Mi-Yeon) was born into the noble class, but became an orphan at the age of 12. She was than adopted by a prostitute on Jeju Island and worked as a prostitute. At the age of 22, Deok-Kim appealed to government authorities and freed herself from prostitution and also reclaimed her noble status. Deok-Kim would then go on to become a wealthy merchant by importing & exporting goods between Jeju Island and the Korean mainland. By the age of 50, Deok-Kim would become one of the richest persons living on Jeju Island. A severe famine would then strike the island taking the lives of one-third of the population. This famine would move Deok-Kim so much that she would sell her entire assets to help feed the starving people of her island.

Gasenadi May 21 2018 6:53 am Enjoyed this drama immensely. And the frosting on the cake was the epilogue in which Ko Du-Shim talks about the historical Kim Man-Deok and explains her importance to Korean history. Loved it!

Ashani upeksha Jan 18 2014 1:23 am lee mi yeon and park sol mi are the best actresess acting in' The Great Merchant'.,i do love both of them.

desnie Sep 11 2013 9:25 am the great merchant is good but it can't be compared with Dong Yi or A Jewel in the Palace or the Holy Pearls or the Moon that Embraces the Sun

Louise Sep 07 2013 11:37 pm The great merchant is trulyMAGNFICENT! I Iike what the story is trying to give us. Grand!Fameux! Its teaching a true lesson, it does. That our cast or status doesn't matter when considering success.Ahh............i like both Kim and Jeong hong-su Ses magnifiques! I adore Kim man-deuk! J'adore! Ces't tellement interessant! Ces't vraiment bon! J'espere que vous aves tous beaucoup apprecie.

dolly Jun 08 2011 2:49 pm This drama is interesting. I like the plot. I just hope to I could watch all episodes with english sub because tudou isn't working in my place all the time.

c. toyoshima Oct 15 2010 9:47 pm This TV drama is so beautifuly made and happens to be one of my favorite Korean TV drama series that I cherish. Why has it not received much of the Korean media attention? I am certain that this drama series will do well if shown in Japan and elsewhere.

Helen Apr 02 2010 1:54 am There is so much of arguements and even anger, at viikii.net, amongst the audience over this drama, that korean gisaeng is not a prostitute. Yet all write ups say it just so. Which is right.