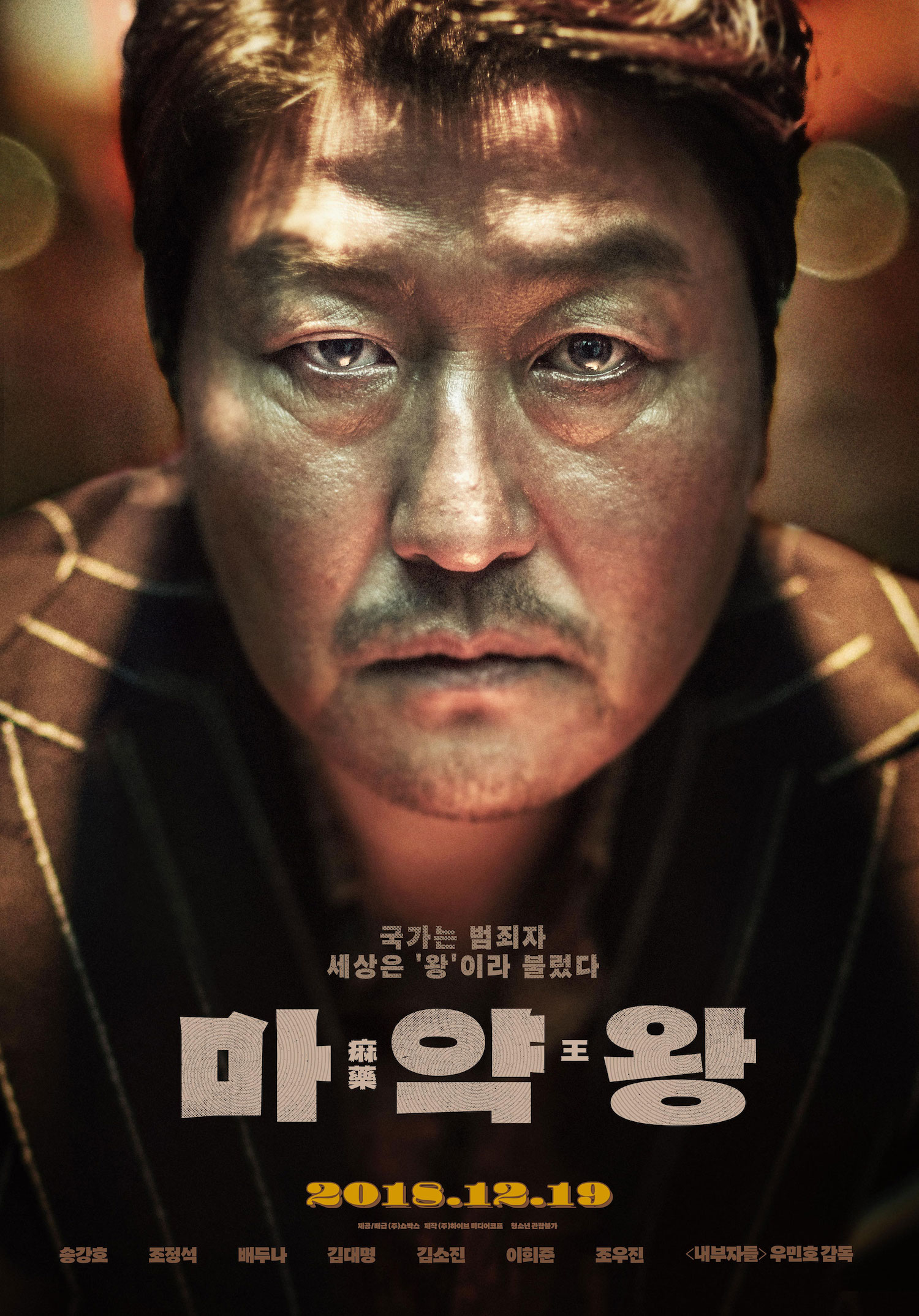 Set in Busan, South Korea during the 1970's, Lee Doo-Sam (Song Kang-Ho) works for a group who become involved in smuggling high priced items like gold and watches. The government then implements a crackdown. Lee Doo-Sam becomes the scapegoat for his boss and serves time in prison. When he is released, Lee Doo-Sam jumps into the business of manufacturing and distributing methamphetamine. At a party, he meets lobbyist Kim Jung-A (Bae Doo-Na) who has connections with powerful people. Kim Jung-A joins Lee Doo-Sam’s business venture. Lee Doo-Sam makes incredible profits, but he becomes restless and gets addicted to methamphetamine.

Meanwhile, Prosecutor Kim In-Goo (Cho Jung-Seok) is transferred to the Busan Prosecutors' Office. While investigating a drug case, he notices Lee Doo-Sam. He targets Lee Doo-Sam and the powerful people who took bribes from him.

Mara Jul 31 2022 8:26 pm Great movie to watch. Well-made, gritty and at times violent. Song Kang-Ho shines as usual as the lead character. So happy to see Cho Jung-Seok as the prosecutor who takes down the drug king. Initially I thought he was a miscast, after watching him play with cuteness overload in the Hospital Playlist series, but in The Drug King he proved me wrong. Also good to see Kim Dae-Myung in a different character than his usual kind doctor role in the said series. Bae Doo-na here is lovely as ever.

Norik B. Checkosky Feb 17 2022 8:25 am Second time around I noticed many supporting actors that I’m familiar with , very well written , directed and acted , Song Jang Ho was perfect as a con man, and a leader , the last scene where he is captures is super , bravo , and of course I , cho jung seek once more outdid himself , as a great detective , while Bae doo nah always shines in her versatility as an actress . It was a dark movie but I enjoyed the acting so much . Bravo to all .

Paul UK Nov 24 2019 5:49 am What's overlooked in this film is probably the steel balls Kim In-Goo the hero character must have had, and his good morals. No amount of money could corrupt him. Not only did he take on the drugs lord to the bitter end, but also really he was going against what at the time massive corruption in the South Korean law enforcement and the government which reached to the highest levels.

He could have easily been killed due to the amount of money involved by trying to take down that guy. Yet he never gave up. Assuming that part is factual it's revealing and interesting how the government just sent one guy (probably a token gesture and assumed he would fail) to clean up the corrupt local law enforcement and take on what was by then a massive industry emerging with large scale gang activity and corruption.

Paul UK Nov 24 2019 5:27 am @Ki I think you're missing the point. The rise and fall of drug manufacturers and smugglers/dealers has indeed been told many times. And there are parallels with characters and stories like Pablo Escobar/Narcos series which no doubt Netflix wanted to capitalise on, as this a popular theme in the West.

However, the point you're missing and why this is no ordinary film, is because firstly it's based on the life of a real person and you see his progression into the world of smuggling and eventually crank manufacturing and smuggling. His life story and rise was pretty brutal and makes Pablo Escobar's look tame. The guy was stabbed several times and nearly killed. Beat to within inches of his life for hours and still survived and emerged at the no1 drugs lord. I think the film probably glosses over a lot of the brutalities of his rise, the gang feuds, and what he had to do to maintain that position. But it's still impressive to see anyone who beats all those odds and builds a business empire on this scale. He was the Pablo Escobar of Asia.

Another even more important key point I'd make about why this is not your run-of-the-mill crime film is because it gives important historic context on what South Korea was like in 1970's. It was very corruptly governed. The country and society was still finding its way. This film is based on real history in 1970's era South and North Korea, and Japan. For some that's very interesting to see. Especially how all three countries were involved in crank trade...or what we know today as the crystal meth epidemic in the West..how its origins were in Japanese military and WWII which created a huge blackmarket for the drug in Japan's post-war years. Which both North Korea, and South Korean smuggling gangs supplied. I had no idea about any of this so found the film entertaining, but at the same time educational/insightful.

Paul UK Nov 24 2019 5:10 am Song Kang-Ho is a very talented actor he really was convincing as a drug addict towards the end.

It's strange, but I read a comment by Song Kang-Ho where he said, this part and character was one of the most difficult he ever did. Mainly because he had no experience of drug use or addiction which is a taboo thing in South Korea (is it really?!) and secondly, because he didn't know how the South Korean public would react to seeing scenes like this and the drug use. It was a risky film and part he said.

This film didn't do too well commercially in South Korea according to review sites I seen. I find that surprising. It's a stunning film. Well acted with a good story plot. It's also important piece of Asian history told in a compelling and exciting way.

For Western audiences this film is a winner. I highly recommend it over a lot of the action-film fiction nonsense today. Because it's based on real people and events..the drug lord's rise to the top was pretty brutal, but also impressive in a way.

Neeraj Mar 05 2019 5:34 am Can anybody tell me is that Heo Gayoon whose hair is pulled by Lee doo hwan (Lee doo sam Brother) character??

Ki Dec 29 2018 7:55 am This film really felt unnecessary. The rise and fall of a drug dealer has been told countless times and this one didn't do anything to distinguish itself from the familiar genre. I'm just surprised Song Kang-Ho didn't yell out "Say Hello To My Little Friend" when he started shooting his rifle towards the end of the film. Song Kang-Ho wasn't bad per se, but he wasn't particularly interesting either. Just Song Kang-Ho playing a drug dealer. Bae Doo-Na also seemed seriously miscast in her role. Cho Jung-Seok added interest as a hot tempered prosecutor. Wouldn't watch "The Drug King" again and wondered why I watched it in the first place.

Keto Nov 17 2018 5:51 am @Yes, actually i expected Lee Byung-Hun would play out the role in Inside Men really good (and it became one of the best performance in Korean Films) because of how he played the bad role quite good in The Good, The Bad, The Weird.

Song Kang-Ho is having Great films again lately But i would like Kim Yun-Seok to play out the main character like that giving the best of his throughtout the film and The Drug King was really suitable for him. However, he said in the interviews few years ago...he prefer to choose the medium budget films rather than big budget/anticipating ones.

As now Choi Min-Sik is having struggling years of his film career...hope Kim Yun Seok will choose better movies like he did before. But let's see for his debut film as a director next year.

Yes Nov 15 2018 9:37 pm @Keto, it's nice to see someone like you, who know many things about SKH & KYS, but lets fixed something... (1). I do agree KYS will pull that role really good, his portrayal as 'bad guy' maybe the best in Korea (Tazza, Thieves, etc), while SKH with his 'good guy' and 'dramatic' image, may look strange. (2). SKH also from Busan (honestly from Gimhae, near from Busan), he can do Busan dialect too. (3). The same thing happened with Lee Byung-hun in 'Inside Men' (which directed by Woo Min-ho too), many doubt his acting capability, "can he pull the bad guy-turn-good guy role perfectly?" "Lee Byung-hun not suitable with that role, isn't it?" but turn out the film was both critical and commercial success. (4). Third and fourth weekend of December always have a good film^^ (i hope so). Sorry for bad grammar...

Keto Nov 15 2018 9:33 am Honestly, something not suitable, Song Kang-Ho is a Great Great Actor but for this particular role, Kim Yun-Seok is suitable, his voice tone will make the movie more intense and as he is from Busan, he can do better Busan dialect.

Most people might not agree because for them, SKH is a better (also more popular) actor than KYS, I am not comparing between two, but Just for the main character of this movie, KYS is suitable. For deep Korean movies fans, some will agree on this.

Anyway, what's done is already done, expecting this movie as the best of 2018.

ngs Jun 03 2018 7:43 am Song Kang Ho as drug smuggler ?!?!? DAEBAKKKK This veteran actor can pull any role so freaking well, from annoying man, funny man, lovely man, even scary killer... cant wait for the film! and the other cast too! They are top notch actor and actress :D