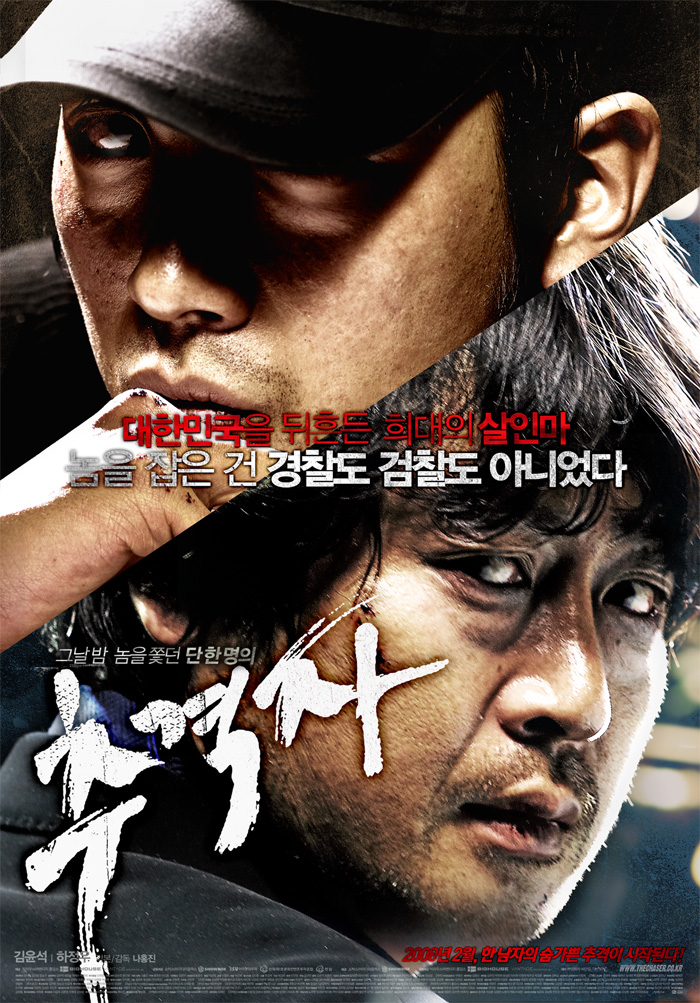 Ex-detective pimp Jung-ho is angry because his girls keep disappearing without clearing their debts. One night, he gets a call from a customer and sends Mi-jin. But when Mi-jin meets the customer, Jung-ho realizes the phone number of the customer matches that of the calls the missing girls got last. As something smells fishy, he searches for her. During his search, Jung-ho dents a car in the alley. When Jung-ho spots blood splattered on the driver’s shirt, he senses the man, Young-min, is the suspect. After an intense chase, Jung-ho finally catches Young-min. But because of Jung-ho’s pretense as a cop, they are both taken to the police station. At the station, he bluntly tells the policemen that he has killed the missing women, and the last girl, Mi-jin, may still be alive. As the police force is obsessed with a random search for corpses, Jung-ho is the only one who believes Mi-jin is still alive. With only 12 hours left to detain the serial killer without a warrant, Jung-ho’s hunt begins. 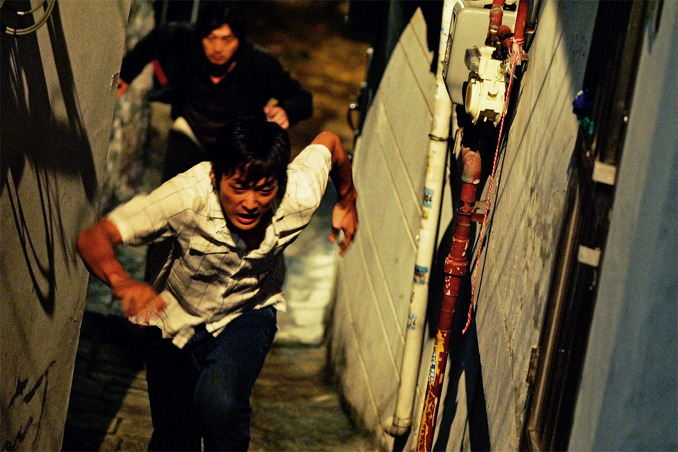 heyho Mar 09 2021 5:29 pm Just finished this movie and come here to curse, turns out it based on true story. Damn. You'll getting annoyed throughout the movie. Nothing happen like how we want. Everything is so frustrating!!!! But yeah that's what make it a good thrilling movie. The director & writer did a great job. Actually a lot of things in this movie have higher probability to happen in real life rather than a simple 'criminal-getting caught-happy ending' kinda story.

Migthy Thor Jan 27 2021 2:28 pm Great movie (",) Although it's gruesome because of the savage manner of the killings but that can not be helped since this was based on the real life serial killer Young-cheol Yoo (유영철), who was convicted in 2005 of murdering 20 people and in his killings Young-chul Yoo often used a hammer as his primary weapon. The cast did an excellent performance that merited them to win awards. I hope this kind of psycho crimes never happen anymore in our society. Two Thumbs Up !!!

wayer Jan 07 2019 11:04 am I feel so frustrated with the prosecution. At least the cops tried so hard to find evidence. I wish the director made Jungho blow Youngmin's head off, that would made up my dissatisfaction. Great movie indeed!.

Hyebin May 11 2018 10:36 am This movie is great. They said this is based on true story. If so, i do think police is hopeless. Anyway, this movie is really good and make me frustrated.

why didnt he share his findings with the police omgiwannapunchsmthng Apr 18 2017 5:27 pm I turned it off after that shop scene near the end. This is the most frustrating movie I've ever seen.

cmcross Jan 26 2014 3:20 am This was an awful movie with great acting. It's like the writer couldn't let anything happen without a painfully frustrating and cliche plot device. By the end, I was so frustrated with the plot, the cops, and lead character I was cynically hoping both the lead guy and the bad guy would die at the same time in that again painfully cliche fight scene. As for the bad guy in this show, he should have done some gambling or bought a lottery ticket. Throughout this show out of this show ridiculous and out-of-this-world lucky things kept happening for him. What a waste of talented actors and actresses. I love Korean shows and movies but this one was just too frustrating to enjoy.

markiza Dec 07 2013 1:38 pm I hope Hollywood will not taint this masterpiece with one of their "pathetic, shallow, make-me-want-to-throw-up" one of those remakes. Hollywood can't, simply can't make anything good and original anymore, even if they rip off someone else's work, they taint the original with their idiotic delusional copies, so no, i hope the Hollywood remake will never see the light of day, and no sequels, this one can stand on its own. the story has been told. it has been resolved. move on to greener pastures and dazzle us with something new!

BigQworm Oct 22 2013 11:17 am There has to be a Chaser 2 and 3.. There is so much more to be told. I have been anticipating the US version of which Leonardo DiCaprio was to star but nothing yet... Great film great characters and a haunting storyline.. The best serial killer film to date...

Eiffel Sun May 07 2013 4:30 pm This stunning movie brings chilly and mixed feelings to me as you can't tell but so eager to know how the storyline will go. You may think whatever happen to this or that person will either bring you relief or more anger etc but this is what the movie is good at.

Very impressive. Even if you're read the storyline based on a true story, it only gives you a structure but you will be watching more details which the director put in. It's beyond our imagination.

Sa.Ho Apr 09 2013 12:59 am I'm stunned right now .Just finished this movie and I have to say absolutely marvelous performance from two leading actors with a incredible story line which I now found out it's based on a true story . I am definitely going to watch every single movie which Ha Jung Woo and Kim Yun Seuk stared in . LOVED IT

Gasenadi Sep 08 2012 9:39 pm Unlike any serial killer thriller ever done, and I've seen a few excellent Korean ones already. Despite, as Ki says, the killer being apprehended early in the movie, the suspense just keeps intensifying at a steady pace until I could hardly stand it anymore. What an array of characters and superb performances! I watched this after seeing "The Yellow Sea" and they are both engrossing, yet in different ways and with a different tone. I'm now off to watch whatever I can with Ha Jung Woo and/or Kim Yun Seok.

JohnBTK May 04 2010 6:49 pm Please please please juseyo! can someone tell me: WHERE IS THIS SET>? i mean like what district in seoul - better yet a google map location or something. i dont have the film and i cannot find the setting on any website please contact my facebook /johnBTK i would really appriciate this and i could reccomend you loads of other movies similar

jugang Sep 22 2009 7:16 pm People who haven't see it, you guys should watch it! It's actually not a so thriller film but put the concentration on the human EQ & IQ part of describing the whole incident that happen whether in the real one or in the movie. And the whole arrangement of the movie was fantastic....in the sense that the purpose of doing the movie is to tell a real happening & shocking story and not to thrill stupid things to audience. Even I didn't like to watch thriller movie but this is really not a stupid scary movie (can consider not a scary one). So people who like to watch scary movie please watch it & you will feel stupid for watching all the stupid thriller movie.

Sly Apr 28 2009 5:01 am This is one mean yet so bloody brilliant film out there... I'd literally freak out in most parts and the word for it is definitely RIVETING!

Rumi Dec 22 2008 5:58 pm Great movie and great plot. It's something that you rarely see in movies nowadays.

Ki Jun 28 2008 12:00 am Upon its theatrical release in Korea (Feb. 14th, 2008), "The Chaser" simply took the box office by storm and packed Korean cinema houses for 3 consecutive months. Currently the movie is the highest grossing film of the year in Korea, yet that highest grossing title doesn't always correspond to a great film or even a decent film. Just think back to 2007 and recall that the two highest grossing films in Korea were "D-War" and "May 18." Two films that were simply aweful. Despite that, in the case of "The Chaser," something tells you that there must be something special about the film. The movie doesn't possess gaudy special effects or actors that would bring many people to theatres by name alone (at least when the movie initially opened). More surprisingly, "The Chaser" centers around a serial killer, a topic that's quite common in Korean films these days (Our Town, Seven Days, Rainbow Eyes, Black House, etc). So why exactly did "The Chaser" attract so many movie goers? The answers (please take note Korean movie execs) are found a few paragraphs below.

In "The Chaser," a former cop turned pimp Jung-ho (Yun-seok Kim) is having one of those days. Two of his girls have gone missing (one with his car) and a third girl calls in sick. He's strapped for cash and owes money to unscrupulous characters. Jung-ho then makes the fateful decision to call the sick girl, Min-Jin (Yeong-hie Seo) and demand that she meets another client.

Later that evening, Jung-ho drives off in his recovered Jaguar only to find the missing girl's cell phone in his car. When he gets back to the office he looks through her phone to find out the identity of her last client. The last phone number is 016-9265-4885, the "4885″ ringing a familiar note in Jung-ho's memory. He then checks through his client list notebook. Both of the missing girls' last clients were 016-9265-4885 and further more... Min-jin is now meeting that same person.

What the Chaser brings to the table is a potent combination of a "you gotta grab-your-armchair" like intense script and performances from the entire cast that is worthy of "encore!" chants. The movie is directed by newcomer Hong-jin Na, a name that will likely become much better known in the coming months. The beauty of Na's "The Chaser" is that the movie leaves out all the gimmicky parts of recent Korean thrillers (the hokey plots twists and CSI like over visuals) to focus on nothing but the core of the film: an intense chase to uncover bodies before the killer is released. Yes you heard that right. The killer is actually apprehended in the first quarter of the film! When have you seen a movie where the killer is found, chased, and then apprehended in the early portions of the movie? The real drama, certainly unique for its genre, begins once the killer is captured.