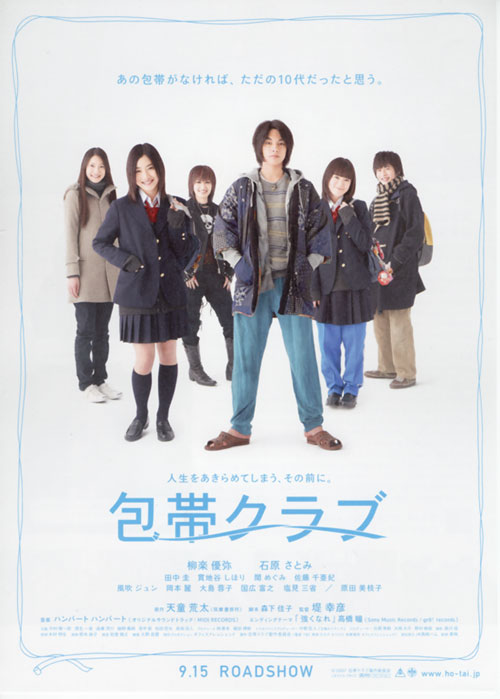 A high school girl, Wara (Ishihara Satomi), looks cheerful, but she conceals darkness deep in her mind. On a sudden impulse, she nearly climbs over a fence on the hospital roof, when an unacquainted boy, called Dino (Yagira Yuya), persuades her otherwise. Concerned about troubled Wara, Dino puts a bandage on the fence. Wara feels comforted by his act, and comes up with an idea to form "Hotai Club" (Bandage Club). The Club asks people to post their bruising experiences on the site, then the Club applies a bandage to the damaged part or the place, and a digital photograph is sent back to the original poster. Wara started the Club with Dino and other friends. Club members each have their own problems, but they are gradually freed from their worries through the activities of the Club.

Prince Luso Dec 27 2013 6:21 am I loved this movie even though some things are a bit cheesy from a western point of view. It's touching, it's comic and it's beautifully filmed and has great music! The cast is simply amazing! Initially I went to watch it because it had Ishihara Satomi, but everyone was incredible.

the artist I think it's:ハンバートハンバート and one of the songs is:「不穏な風」Just search it and if you watched the movie you will instantly recognize it.