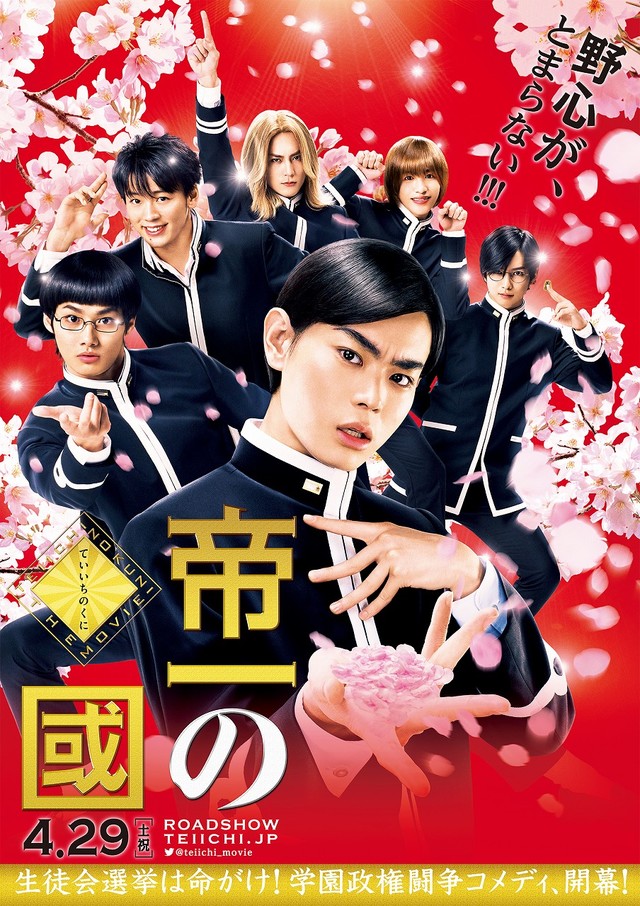 Teiichi Akaba (Masaki Suda) is a student at a prestigious private male high school known for producing important politicians and bureaucrats. His dream is to become the prime minster and make his own country. To help achieve his dream, he wants to become elected as his school's student council president. The elected student president receives privileges and a better chance for promotions later in the political & bureaucrat world. A power struggle takes place surrounding the student election.

Tabinda Shamaoon Feb 23 2021 2:42 pm I haven't seen it yet but i already love the cast members definitely looks fun

kurisuniichan Jan 07 2021 9:54 am what a hilarious movie! i loved every characters especially Dan & Koma. Kudos to Suda's acting here and the story are unpredictable. Well recommended movie!

I was hoping that there was an anime too made on the manga or any other films. Does anyone know if any work is in progress.?

Ir Mar 25 2019 9:23 pm This movie is hilarious! And I love how most of their casts are known for their shoujo roles. I'm the most surprised at how shuhei nomura delivered his role as togo, he doesnt get roles like this often and i think he did a splendid job! He was too funny to hate. Suda did an amazing job as expected, he's definitely a camouflage in acting, he fits in everything!! I love teiichi and komei's relationship, I wish they digged through on how they became friends and even mimiko seems close to him too! They didnt focus on mimiko and teiichi's relationship that much but when mimiko got mad at teiichi and he sulked, it showed how much he loved her and that makes him human. I also love how mimiko always saves teiichi from togo by giving him a high kick lol

I didnt think I would like it at first, I just checked it out only knowing who the cast were, I dont have regrets and I've watched it for 5 times already lol

Teiichi kun Aug 18 2018 3:30 pm This is a great comedy movie about the ridiculous battle of dirty politics in student council position. really hope this movie produce as series. Or at least they make part 2 when Teiichi in second and third year. I never expect Shuhei Nomura (normally played an ikemen character) played Kikuma so well that almost can't recognized him.

blob Jun 10 2018 12:01 am I thought this was just going to be a slapstick comedy "dumb" movie. And it was, but it was a little more than that. And I loved it. The premise didn't sound that interesting at first tbh, but the story, cast, directing, and execution were amazing. I'm so glad I checked it out. First off, for young actors who, many times, are cast into shoujo movies/dramas, I was surprised at how well they executed their characters and their actions. (I enjoy shoujo movies!! I just mean that school/shoujo dramas are generally known to have mediocre acting and cringey scenes). The real gem of this movie is definitely the characters. Even though Kikuma was obviously a "villain", I couldn't hate him because he was hilarious lol. And our main character Teiichi is young, selfish, and lacks some morals, but through his growth and guidance from the people around him and his clever and extravagant personality (plus the overall vibe of the movie) you kind of can't hate him. Kikuma and Teiichi are very similar, but their differences are what make you really root for Teiichi. Honestly Shuhei and Masaki do slapstick really well!! I commend them for playing their roles so well. Plus the stark juxtaposition of sweet, righteous, hard-working, and perfect Dan would normally make me hate a character like Teiichi even more, but their relationship actually increases my affection for Teiichi?? Dan is still the most likable though--if this was any other story, Dan would be the protagonist lol. But the thing is, as much as I like him, if Dan was the main character, this movie just wouldn't be as good. In most movies, characters other than the main cast I wouldn't have any particular feelings about, but even loyal Kohei and headstrong Mimiko are likable. Even Rolando who seems strong, but is actually very weak, and Okuto who believes in himself and understands others are likeable. Even Teiichi's father, who creates the stressed monster that Teiichi becomes, I can't hate. As somewhat of a satire on politics, especially Japanese politics, this movie had so many hilarious scenes where I thought "is it okay to laugh at this? does this scene have an underlying meaning or is it simply just to be funny?". But the ridiculous dialogue and over-the-top scenes bettered the movie in its meaning, irony, and entertainment. I enjoyed every minute of this movie--going to be one of my favorites for a good while :)

Jenneevie Mar 21 2018 5:26 am I love the actors and i love them even more after watching this hilarious movie.

Lola Mar 19 2018 4:43 am First and foremost, I want to say what an eye candy this movie is!! Sooooo many ikemens, my fangirl heart is overjoyed!!

So here are my thoughts, I've summarized them into three: 1. All these ikemens are so great in their roles, they gave justice to each and every personality they portray. 2. Absolutely and unequivocally hilarious! I kept hitting replay button to watch the scenes over and over. Twists in the plot to the end. Loved the story! 3. My absolute favorites: Suda's facial reactions, Shuhei's villainous role, Chiba's baby face (goodness, the guy is 30 but can still pull off a high school role *jaw dropped*), and Ryoma's mere existence.

LegolasHair Feb 03 2018 3:07 am This one is hilarious with impressive performance by the whole cast.

Angela Nov 22 2017 3:18 pm The movie was so good with plot twists that leave you hanging off your seat and laugh some more.

But what surprises the most is: while most of the main cast is like 22-24, we have our dear Chiba reaching his 30s, but still plays 17 years old characters.

JM Mar 09 2017 11:55 pm All great actors so I'm looking forward to it, and the trailer looks funny but why oh whyyy does my favorite actor Nomura Shuhei have the bowl cut of the centry?!?!???