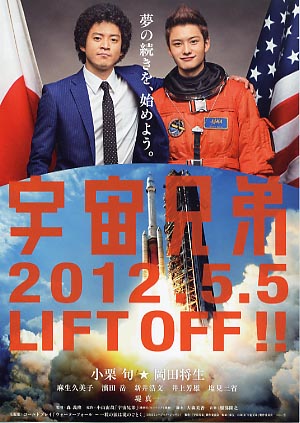 When Mutta was 12-years-old and Hibito was 9-years-old the two brothers saw what they thought was an UFO flying towards the moon. They made a pact then to become astronauts and one day fly into space together.

Fast forward to the year 2025. Older brother Mutta (Shun Oguri) works as for an automotive company and his younger brother Hibito works as an astronaut. Although Mutta failed to follow through on his childhood promise, after losing his job, he receives a phone call from Hibito which reignites his childhood dream of flying into outer space ... 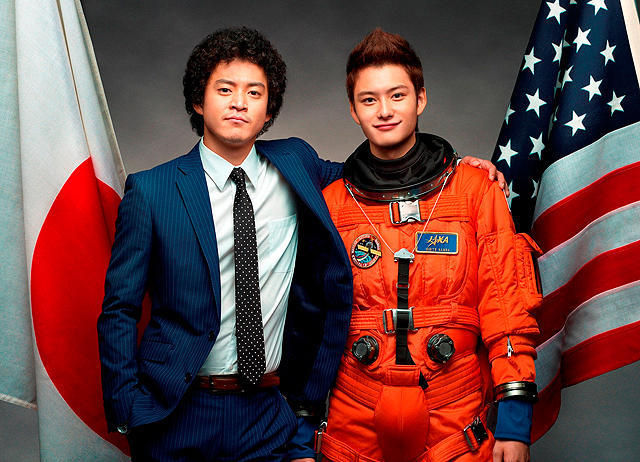 May Feb 12 2018 8:51 pm Is there a role Oguri Shun can't play?? Such a great and endearing performance from Shun. Lovely movie and great chemistry between the lead actors

crystal Jun 13 2016 3:19 am I noticed that Damian is conductor Jean in Nodame Cantabile teehee

bluelysia Jun 12 2016 11:32 am I love this movie more than I had expected! My favourite 2 actors with good story and cute humour is simply amazing.. love Nanba brothers!!!!!

hibito Dec 03 2014 1:36 am the story is quite heartwarming :') the two kids sure looked like oguri and okada's younger versions kawaii! strange how a Japanese movie used foreign songs like Sigur Ros' Hoppipolla and Coldplay's Every Teardrop Is A Waterfall as soundtracks. They're both great choices :D

mili Apr 08 2014 11:21 pm wonderful movie I ever watched, it is so inspiring me to have a great dream. I also cried when I watched Hibito tried to survive himself and Damien after had accident. so great movie!!! recommended!

get rid of cellulite Oct 27 2013 2:59 pm Hi there, You've done an incredible job. I'll certainly digg it and personally recommend to my friends.

I'm confident they'll be benefited from this web site.

Read More Oct 14 2013 6:14 pm Hey there, this is a excellent article. It loks like we've many of the similar views. Sofakingnews. com released a column not long ago called "5 Reasons You Should Be Watching Space Brothers" and this reminded me personally of theirs. Look it over should you get a chance. I'm sure you would be interested in that and also I'd like to know what you feel about their own point of view! Thanks.

TheDetails Jun 03 2013 5:35 am Did anyone notice the camera man to the left of Mutta (during the Hibito lift-off scene) was constantly saying and mumbling f@#k?

Icha Jan 24 2013 3:20 am I saw the movie in raw Japanese two nights ago. So impressed, despite my limited Japanese! Still watching the movie now because it's soo goood! Masaki was gorgeous as always, particularly in that hair style. He plays guitar too, and speaks English! And Shun was adorable with that afro style. So different from his usual cool-guy appearances. Shun-Masaki as Mutta-Hibito brothers are the best!

I would have gone crazy if I saw them in person! Especially because of Masaki Okada.

some person Aug 06 2011 3:01 pm woahh i just saw them in the gift shop at kennedy space center when i went to florida in june. i had no idea until they walked right past me... totally random experience