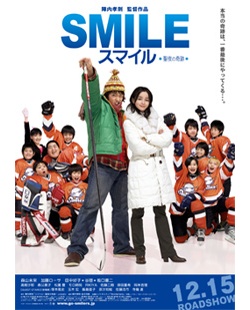 After sustaining a career-ending injury, tap dancer, Shuhei Sano (Mirai Moriyama), arrives in Japan's snow-bound, northern island of Hokkaido with hopes of marrying his longtime girlfriend and figure skating instructor, Shizuka (Rosa Kato). But his plan quickly runs afoul on Shizuka's father, a local business magnate and ice rink owner, who is not ready to relinquish his daughter. Without good reason to deny the couple, however, the father reluctantly agrees to give his blessing if Shuhei can coach a local junior ice hockey team to their next victory. Despite having no prior knowledge of the game nor any skating experience, Shuhei accepts, unaware that the team has NEVER won a single game.

The"Smilers", as they seem unfittingly named, are a handful of self-proclaimed"losers","misfits" and"rejects" from other teams. More than talent, they lack any semblance of teamwork, motivation and confidence. But to everybody's surprise, Shuhei proves himself ready for them, employing an odd mix of child psychology, genuine concern and a few ingenious tricks to get the team to play to their potential and win!. Flabbergasted, Shizuka's father ups the ante by making his daughter's hand conditional upon winning the regional tournament − a goal that will require nothing short of a miracle given the near invincibility of the defending champions − a slick, well-financed hockey team run by a megalomaniac.

Just as Shuhei's magic and the team's hopes begin to wear thin, a beautiful young figure skater idolized by everyone at the rink becomes hospitalized with a terminal illness. With her chances of recovery as slim as the team's tournament victory, suddenly, the team has its battle cry. But will it be enough?

Ki Feb 11 2009 5:15 am Straight from the colorful labs of Fuji TV comes “Smile,” a cheery film centered around a rag tag group of children hockey players (known as the Smilers) and their tap dancing coach who has never played hockey before. Why is a tap dancer coaching a hockey team you ask? Simple really, the tap dancer Sano (Mirai Moriyama) visits the home of his fiance. He is about to ask her father for permission to marry her, but the father rebuffs the idea before Sano can even ask. Then his girlfriend, Shizuka (Rosa Kato), mentions that Sano was a former professional hockey player in Canada. This intrigues her father because he owns a hockey rink and needs a coach for the arena’s youth hockey team. The father states in no uncertain terms that he will only give his approval if Sano coaches the team to victory.

And with this promising start, “Smile” gives the impression that it could be the next Swing Girls/Ping Pong/Waterboys type of film. Somewhere around the middle portion of the film reality settles in and you realize that “Smile” will come in several notches below those comedy classics.

As mentioned earlier “Smile” is a Fuji TV produced film and some of the plot twists found in “Smile” smacks of the melodrama found in television dramas. Yup if you haven’t guessed by now I’m talking about terminal illness. And in case you haven’t watched a Japanese melodrama before you should know that when terminal illness strikes it usually occurs to someone young and attractive. This time around the victim is Reina (Anri Okamoto), a girl that skates at the ice rink where the Smilers practice and girlfriend to their best player Masaya. Before you can say “Crying out Love for 1 liter of tears!” we learn that Reina has leukemia and her condition quickly deteriorates. Cheap way to pull on the heartstrings to say the least.

Mirai Moriyama plays the hockey coach Shuhei Sano. Like the rest of the film, Mirai Moriyama charmed for the first half of the film, but became more annoying as the movie progressed. The shtick with the hockey coach tapping his feet while watching his players worked early on, but when the coach did all out tap dances during actual hockey games it was like “OK that was funny the first coupe of times now please stop.” It didn’t help that Sano wore nicely tailored suits that were annoyingly hemmed too high (”what tap dancers have to wear high waters to tap dance?”).

The actual hockey games had moments of interest but more often they felt overlong and repetitive. Subtle use of CG graphics did help when used. During the Smilers finale match with the Thunderbirds the odd nature of “Smile” really came about. Ronald McDonald and the golden arch looms in the background in an obnoxious product placement. The song of choice during this scene is the Ramones “Do You Remember Rock N Roll Radio?,” a song that sounded as out of place as did the Red Hot Chili Pepper tune did in Death Note. Imagine that you like apples and oranges, does that mean you’ll like apples and oranges together?

While “Smile” gives a valiant effort to make you smile, the abundance of cheap tricks and repetitive gag turns the once promising film into a ho-hum film by the time end credits roll around. If you do find yourself losing interest you can always try to keep track of all the cameo appearances by well known actors (Koichi Sato, Hiroshi Tamaki, Takashi Tsukamoto, Sachie Hara, Susumu Terajima etc.). Indicative of the comedies Fuji TV produces, “Smile” comes in somewhere between “Bubble Fiction:Boom or Bust” (good) and “Check it Out, Yo!” (bad).