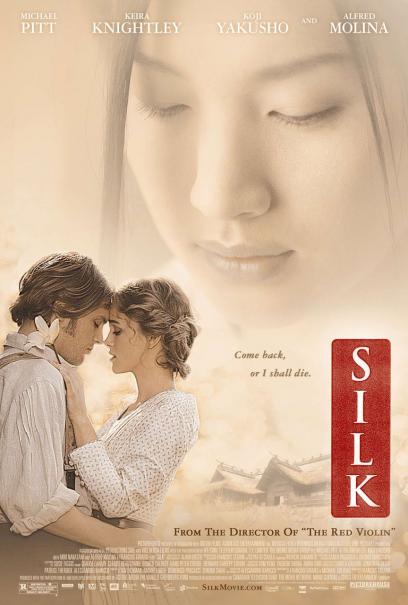 Silk is based on the best-selling novel by Italian author Alessandro Baricco, which has enthralled readers worldwide over the past decade. The story follows Hervé Joncour (Pitt), a nineteenth-century French silkworm merchant who is married to the beautiful Hélène (Knightley). When a strange disease depletes Hervé’s supply of the precious insects, he becomes a smuggler, travelling to Japan for its store of silkworms. Although Japan in 1861 is largely closed to trade with the outside world, he manages to cut a deal with an enigmatic nobleman who agrees to sell him all of the eggs he requires.

While in the intrigue-ridden Japanese court, Hervé catches sight of a mysterious woman. As soon as their eyes meet, Hervé is entranced. They do not touch or speak to one another. She gives him a note, but he cannot read it until he returns to his own country and has it translated. When he does, Hervé becomes consumed by thoughts of the woman as if by a waking dream. He makes a second trip to Japan for silkworms, and the two begin a secret affair. Hervé falls deeper and deeper into a trance – until his wife grows suspicious.

Silk transports us back to a Japan whose centuries-long resistance to foreign trade is just beginning to crumble in the face of encroaching modernity. Following Hervé’s path through Japan, Italy and Egypt, the film has a geographical authenticity that makes its rapturous narrative all the more enveloping. Girard spins a rich, hypnotizing tale as enchanting as the gossamer thread after which it is named. -- TIFF