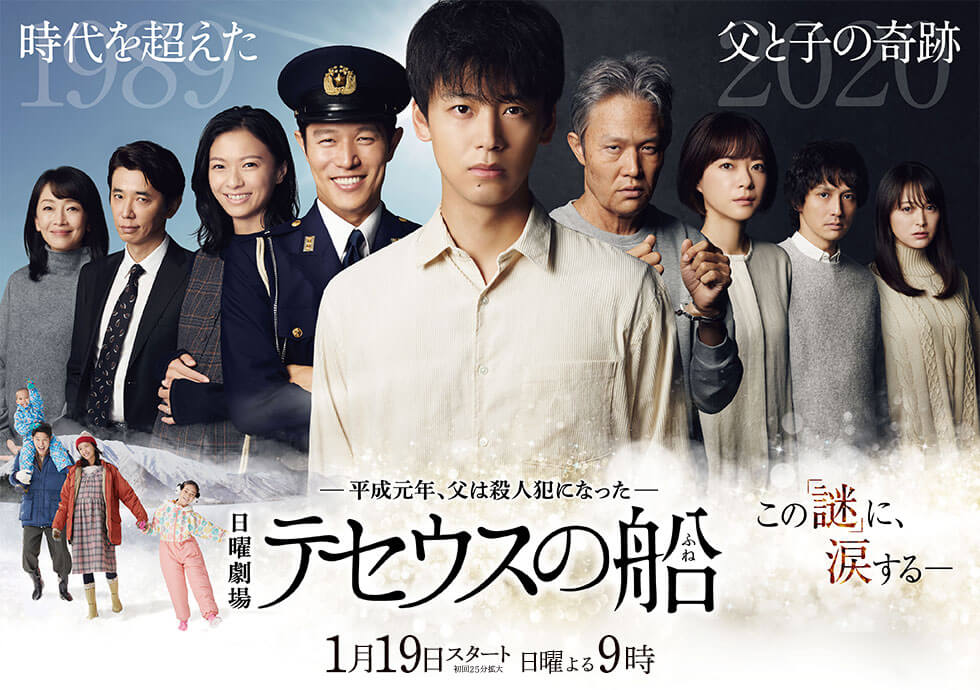 Shin Tamura (Ryoma Takeuchi) and his mother have experienced difficult times due to Shin's father. His father was a police officer, but arrested for murder. One day, Shin Tamura's wife tells him to trust his father. This leads to Shin Tamura's decision to visit his father in prison, but, suddenly, he is shrouded in mist and travels back in time to 1989, which was right before his father's murder case took place. Shin Tamura sees his family with smiles on their faces. He decides to change what happened in the past.

Re Dec 28 2021 11:50 pm Good dorama. I like the plot in each episode, it bring me to more curious about who the culprit and unknowingly finished several episodes.

But I don't like the MC. I mean... hey, you can't catch the culprit with just a lot of talk and reckless capital. He never used her brain, and when it didn't go as expected, he would shriek in tears. Several times he made careless decisions that made it even more difficult to find the culprit. And it makes me angry everytime I watch him.

Re Dec 28 2021 11:47 pm Good dorama. I like the plot in each episode, it makes me more curious about who the culprit and unknowingly finished several episodes.

But I don't like the MC. I mean... hey, you can't catch the culprit with just a lot of talk and reckless capital. He never used her brain, and when it didn't go as expected, he would shriek in tears. Several times he made careless decisions that made it even more difficult to find the culprit. And it makes me angry everytime I watch him.

roy Dec 10 2021 6:17 pm the plot is so good since it's based on manga series, always develop and branch into unexpected stories. but the acting directions could be more refine (especially the main actor he cries all time); as this is a drama from the same director of Byakuyako (2016) and Shinzanmono (2010) which i think are exceptional. Maybe it's TBS network direction to make it more mellow but idk. for me any good mystery genre dramas still comes from WOWOW network.

Melody Oct 02 2021 3:09 am The first 4 episodes were good then terrible after that. I almost couldn't bear the main actor Ryoma Takeuchi. He kept making that crying face and squinting his eyes. So annoying. 5/10 for me.

JNJ Oct 04 2020 1:24 pm The suspense in this drama is really good. The accomplice was not revealed till the last episode. But the motive behind the accomplices were too weak to have such elaborate crimes. Too many loopholes in the story, so dont expect to get answers for everything.

Ryoma Takeuchi's acting is really good, but looks forced in some scenes. Drama theme is dark, so it wont be enough to do justice to his character. Though the screen time was limited for Juri Ueno, her impact in this drama is seen in both the timelines. Third timeline was just rushed to finish the drama. Nana Eikura's role made this drama a family themed despite drama being suspense and thriller type. Her scenes slows down the story for the better. I haven't seen Ryohei Suzuki movies before, but his role (in the 1989 year timeslip) caught my curiosity. Going to watch more of his movies.

Final timeline could have been extended including that of Juri Ueno's screen time.

Dekaha May 05 2020 12:26 am The family theme was good and warm but it left a lot of details and deep story from the manga. A lot of holes in the drama's plot. Too much flashback. Instead of flashback, i prefer they added the detail and riched the story from the original source. Don't expect it too much as mistery or detective drama because the main focus was the family building relationship. The twisted from one of the culprit was surprising but unfortunately, it dropped with such a weak motive. Suzuki ryohei acting was amazing, especially the older sano bungo. Ryoma's acting was okay but somehow it looked like he forced it. Btw, the acting of the child actors/esses were all good. Overall, it was enjoyable. For those who read the manga first and love it, prepare your heart for the changes in the drama....

Farah Apr 15 2020 2:52 am The series plot was underrated, the characters were ok, the actors were amazing. Overall it is a 8/10 to me. Kudos to Ryoma Takeuchi for getting the lead role, he deserved it. The theme song slaps.

AsianDramaReviewer Apr 07 2020 1:03 pm Ueno Juri is there to just promote the drama, but appears for 7min screen time total. The plot is silly, the music theme repetitive, acting is the 10 on a scale that starts with 'terrible', and the twists and cliffhangers are taken from a story written for 7 years old audience. The lead character needs to change the job as he has a serious constipation problem that shows anytime he needs to 'act'. This is an insult to the genre and a shame that Ueno Yuri was pulled into this.