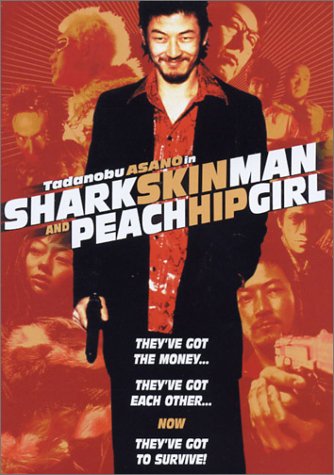 The film opens in a surrealistic mountain setting as a young, determined Toshiko (Sie Kohinata), executes a daring escape from her sexually abusive, obsessive and oppressive, lunatic uncle Sonezaki (Yohachi Shimada). Speeding away down the road, she notices a man running hastily through the woods, clad in nothing but underwear. Distracted, she does not notice the car from which he is running...until she collides with it head-on.

Flash back to before the accident: Samehada (Tadanobu Asano), the virile robin-hood-esque nemesis of the Yakuza, is interrupted from a hot, chaotic menage-atrois by a team of professional hitmen hellbent on recovering their stolen loot and wiping him out in the process. After Samehada is saved by the collision, he thinks fast, jumps behind the wheel and speeds off with Toshiko, unconscious, riding beside him.

Uncle Sonezaki, realizing Toshiko’s disappearance, hires the gun-crazed mercenary Yamada (Tatsuya Gasyuin) to hunt down and return her. The Yakuza gang, headed up by crimelord Sawada (Susumu Terashima), continues on a restless pursuit for Samehada and thier stolen money. What ensues is a wacky chase that transports the audience into the comically violent and tragically hip world of bizarre characters. From the "knife expert" whose personality is that of a straight-laced nine-to-fiver to the spoiled mafia brat best described as a fashion victim; from a self-described "hitman" with no history of a hit to the icy, mob-queen that converses with silence and cigarettes, this ensemble ranks high among those from such films as TRUE ROMANCE and RESEVOIR DOGS . Turning the classical getaway story on it’s ear, director Katsuhito Ishii brings a fresh new look to a classical cinema genre.

Among stacks of detailed storyboards and a script in excess of 200 pages, director Katsuhito Ishii brings his vision of pulp romance and glam action to fruition with SHARK SKIN MAN AND PEACH HIP GIRL. After a three years struggle with rewrites, new storyboards and financial discrepencies, Ishii’s debut feature film finally began principal photography in December of 1997.

"I gave it everything I’ve got!" said the young, seasoned commercial director. And the final print is undeniable proof. Not only did Ishii write the screenplay, direct and edit the film, but he was also responsible for the props, music and even the costume designs. "I worked very hard during post-production to give my film that unique visual quality I like to achieve in my commercials. Unfortunately, this [attention] is something most Japanese films seem to neglect."

On screen, Ishii’s keen eye for detail is immediately recognizable. The colorful cast are always clad in designer originals, a style known on and off the set at hyper fashion gear. And actor Tadanobu Asano (SAMEHADA) dons Takeo Kiuchi designer wear, exclusively, right down to his TK brand underwear. Ishii’s "hands-on" directing style seems to almost supersede the notion of an autonomous art director. In this film he personally chose the colors, designs and fabric for each costume, and topped off the ensemble by matching cars and guns to specific characters--giving a new meaning to "fashion accessories."

The cast had a terrific time shooting the film. "All the characters are so bizarre; everyone enjoyed themselves immensely. The set had an atmosphere of fun," said Asano. However, it appears nobody enjoyed themselves more than the director himself. A journalist visiting the set noted that during the more comic scenes Ishii was always first to laugh outloud. "I love offbeat stuff," he confesses. "I’m hoping SHARK SKIN MAN AND PEACH HIP GIRL will create a new appreciation for the unusual with Japanese audiences." How does Ishii envision the experience? "Screening the movie should almost be like reading a violent and funny manga. But whatever the audience reaction turns out to be, I hope everyone has a great ride."