Setagaya City is located in the southwest part of Tokyo’s 23 Wards. It is approximately 58km2 and is the second largest ward in Tokyo - after Ota - and about six times larger than the smallest ward, Taito. The main rivers are the Tama, Nogawa, Sengawa, Yazawagawa and Marukogawa rivers. Although there used to be some other small rivers used for irrigation, most parts of them have been made into culverts and diverted for drainage as residential areas have developed. The land over the culverts has been turned into nature paths. The terrain consists of plateaus and lowlands, and there is a long area with steep slopes and uneven levels along the Tama River. There are also many woods and agricultural areas, mainly near the riverside. This is a part of Tokyo with a lot of greenery. 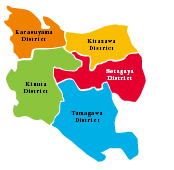