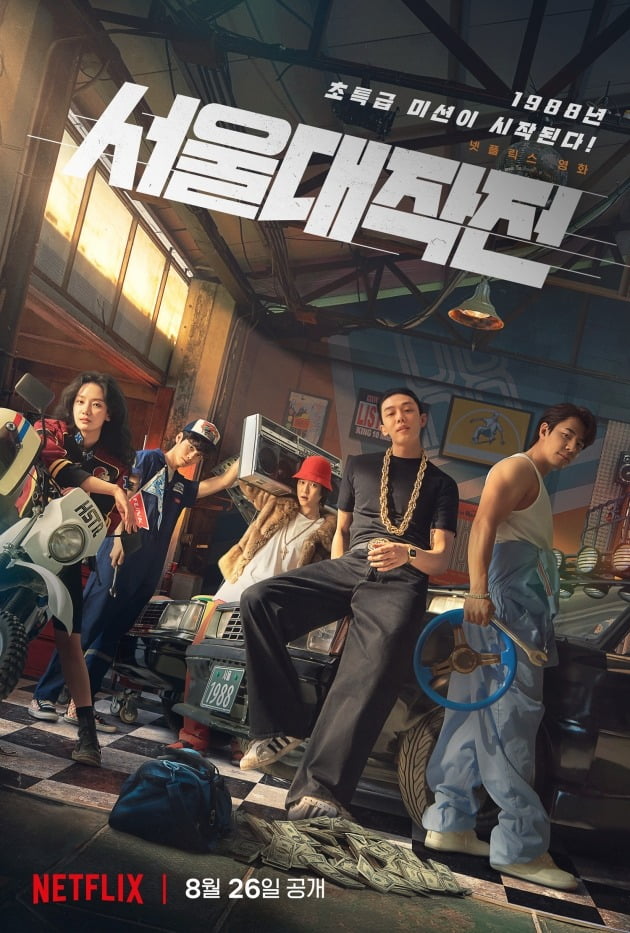 General Mangaer Lee (Kim Sung-Kyun) plays a key role in transporting the slush funds and laundering the money. Chief prosecutor (Jung Woong-In) recruits the Sanggye-dong Supreme Team in the VIP slush fund investigation operation. Chairwoman Kang (Moon So-Ri) is a powerful person behind the VIP and a magnate in the private loan market.

Omo Naija Aug 29 2022 4:14 am I am a huge fan of Yoo Ah and i had to watch it because of him, i love love love the movie. It was a drag the first 45mins but picked up the pace later and after that, fun, fun and lots of action. I enjoyed watching all the car scenes. Congrats to the whole cast, good job and well done.

Renwa Aug 28 2022 10:12 pm What fun! Stella cast in this action packed over the top tale which BTW is quite funny as only Korean drama can include anytime & anywhere. I’m a huge fan of Yoo Ah In and couldn’t stay away. Of course Yoo Ah In always gives a unique standout performance and certainly didn’t disappoint here. It’s a fun ride all the way. Love to read other reviews and came upon a fan base of Mino…when I looked up his character indeed he did himself proud…lovely sense of comedy so I’ll add my well wishes to success in his career. Thank you to the entire esteemed cast for a fun watch. ❤️

Ali Aug 28 2022 9:12 am First one hour plot may seem slow but you secone one hour is amazing and intense, believe me, you have to watch it till the end. I always love Yoo Ah In's acting, the others did great too, its a fun movie to watch

Sage Mage Aug 27 2022 7:14 pm Wow. A Reunion of Yoo Ah In and Go Kung Pyo from Chicago Typewriter one of my favorite. I'm Gonna Watch this. My favorite actors..

bopbophep Aug 26 2022 2:13 pm the plot is quite slow but as it comes to the end, it get more intense. I watched for yoo ah in and suprised with all these top actors and actress. it's fun to watch. overall, I can give 8/10. mino is so cutee in here aahahahahahahhaha Galchi!!

Markiee Aug 26 2022 11:20 am As a car guy, I really admire the car scene in this movie. It just gives me modern Fast and Furious vibes. Of course some might dislike it but if you love cars like me, you will definitely enjoy this movie.

vibes Aug 26 2022 8:16 am A promising movie with so many top star actor, but unfortunately its not worth the hype. The plot was meh... but overall its fun to watch.

Malcolm Aug 03 2022 4:44 am The Fast & The Furious Seoul Drift ...i swear if Dominic Torretto`s grandfather cameos i`ll completely lose it...

MyDream Jul 19 2022 6:31 pm Netflix already announced that this movie will released on august 26

Ichika Satoru Jun 28 2022 10:58 am Still not released yet? I've been waiting for this A-list stars lineup since last year.

Kyungpyo's toenail Jul 08 2021 1:32 am This line-up is seriously crazy. And I'm glad Netflix is producing all these awesome movies and series in Korea too. Makes it easily accessible for international viewers.