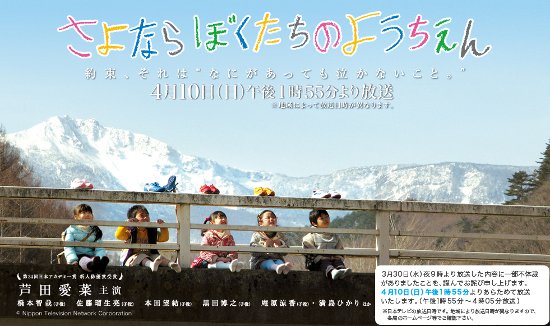 Kanna (Mana Ashida) attends kindergarten in central Tokyo. Her friend was been absent in school for several days. Worried about her friend, Kanna gathers fellow classmates Hiromu Taniguchi (Tomoya Hashimoto), Takujitsu Uehara (Ruiki Sato), Mikoto Mochida (Miyu Honda) and Shunyuu Horikawa (Hiroyuki Kuroda) and they take a trip to out to Takao Station in western Tokyo hoping to find their friend. A pact is made before they sneak out of school that no matter what happens they won't cry ...

Christian Duerig Jun 18 2018 3:17 pm I love all the dramas and TV-series with Manachan Ashida. With her I can find the very lost youth of my time in kindergarten. There are only the Japanese people who can make such a great, heartwarming movie. Because of Manachan I am learning Japanese. On the 23.June Mana Ashida will celebrate her 14th birthday. Omedetou gozaimasu !

Nonette Oct 14 2017 2:33 am Such a beautiful drama. All the kids are cute and the story is heartwarming. The pureness and happiness from the kids time is really overflowing in this drama. Really love it.

Xeffy Jun 24 2015 5:17 am I am not a great fan of movies that revolve around "journey" or "adventure", but this is one great exception. It never got boring throughout the movie, and the ending will surely make you feel something, even if you have the coldest of all hearts. I really love sad dramas like this and 'anohana'. Are there any other similar movies that someone can recommend me?