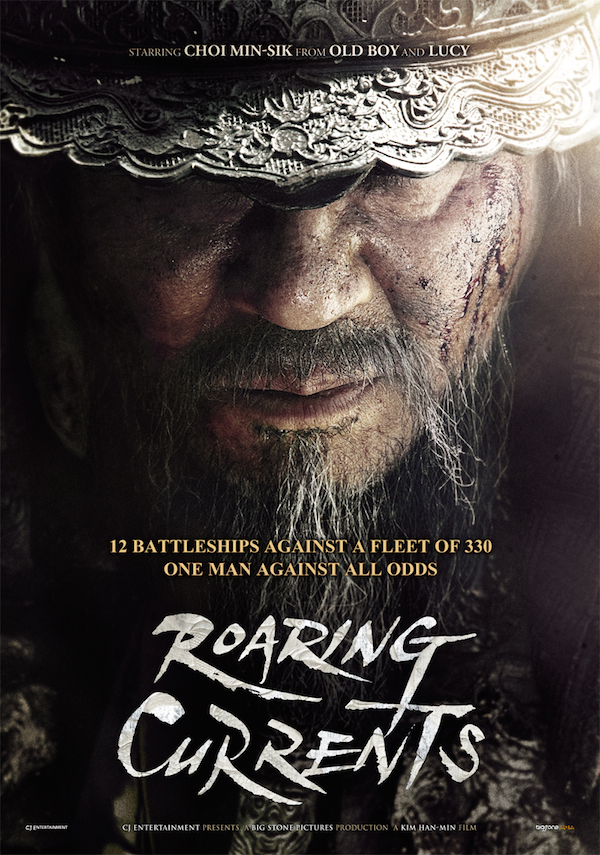 Movie depicts the Battle of Myeongryang which took place October 26, 1597. The battle involved Admiral Yi Sun-Shin, who had only 12 ships under his command, against the Japanese navy which had over a hundred ships.

Thanks to 2 Days 1 Night I came to know history and about this wonderful movie.

Joonhyuk May 22 2018 10:09 pm As expected Choi Min Sik never disappoints his audience with his brilliant acting. He's perfect for the role. Also, Admiral Yi Sun Shin's courageousness amazed me. He is truly an admirable leader.

Malditang Bugay Mar 05 2018 5:32 pm This is a PHENOMENAL movie. A great man of korean history. Using his wits to creat a plan of attack while getting his men to turn fear into courage. Nicely done! Such an inspiring movie. Highly recommended to watch!

CoolBeans Aug 10 2016 4:45 pm This is a must watch movie about human perseverance against the odds. Excellent cast, great acting, directing, scenery and script. And the soundtrack was perfect.

AJ Aug 18 2015 6:05 pm One of the greatest naval battles in history. Terrific production and direction of an amazing film and tribute to the valiant Koreans.

Diane Apr 18 2015 12:07 am So why did they change the historical ending of the battle, when it would have made an even better story?? Can't figure that out, but otherwise enjoyed it.

Ruvie7 Mar 08 2015 5:09 pm Such a powerful and inspirational movie, great acting and directing, simply amazing!!!!! I'm speechless. I'm nt korean bt if I was I too would be proud of the admiral and this movie.

gladys Mar 05 2015 9:59 am Wow what a great movie!! The director deserves his award check out the sequence of the two warring ships at the whirlpool. He totally captured the soldiers were mostly scared chicken shit and the bravery of the admiral to stand alone. What made it extra impactful was that it was based on a true story -that admiral sure was brave - great leaders also inspire others. I can understand why the movie was such a big hit. The user ratings at 80 is not representative of how good the movie is.

jungle_fish Jan 06 2015 12:25 pm in the opening I dont really understand about the movie.. in the battle scene until the end I'm so speechless... Heol~.. THIS MOVIE IS EPIC.... although I'm not korean but why I can feel my heart is beating, on fire, touched, and very proud when they won the battle over japan.. big applause for the director and lee soon shin cast *nearly want crying till end of credit* (y)

Jake Aug 17 2014 2:00 am I always like to see that scene of ancient east aisa is dinamically shown by motion picture. So, I think that in my perspective, Roaring Currents is perfect movie. If the movie is imported in my nation, all of people probably watch the interesting movie.

Ki Aug 13 2014 12:20 pm I watched this movie last weekend at a theater in South Korea and had to sit in the very first row. Normally, I don't ever sit that close to the screen, but all the other seats were sold out and I didn't realize at the time that this movie was selling tickets at a record setting pace.

The quality of the film is about on par with director Kim Han-Min's prior film "War of the Arrows." There's some great action scenes, simplified portrayals of good and bad guys and generous helpings of simpleton emotionalism brought out to make the masses happy. In retrospect, I probably enjoyed "War of the Arrows" a little more, but I though "Roaring Currents" was well worth the 7 or 8 bucks for the movie ticket. Choi Min-Sik provided the foundation for the film and his performance was on the money. Ryoo Seung-Ryong's portrayal of the Japanese admiral veered too close to a boogeyman in a horror film which dampened my enthusiasm for the film. I would have enjoyed some more depth in his character, but damn the action scenes are intense!

After 2 weeks since its opening, it looks like "Roaring Currents" will likely become the top selling film of all-time in South Korea. I have my own theory on why the film is likely to accomplish the feat and it all goes back to the tragic Sewol Ferry accident from a few months ago. That incident really scarred the pysche of Koreans with the cowardly behavior of the ferry staff members. Saving face, honor and all that is really important to everyone here in South Korea and the Sewol staff really brought shame upon everyone here. With Koreans subconsciously and consciously craving to identify themselves with acts of honor, bravery and strength there's Choi Min-Sik in "Roaring Currents" standing as Admiral Yi Sun-Shin on a boat that is outnumbered by 100 to 1. As other boats in his fleet withdraw from seeing the massive Japanese fleet coming, Admiral Yi Sun-Shin stands on his ship and is ready to fight to the death to save his country and people. This captain just ain't running away.

In a way, it's almost like an entire nation is having a mad rush right now to wash away their guilt & embarrassment from the actions of the Sewol Ferry crew and "Roaring Currents" has become the perfect vehicle to provide that at just the right time and place.