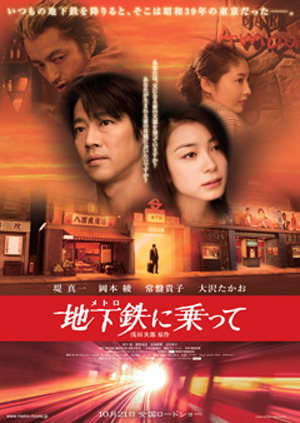 Salesman Shinji (Shinichi Tsutsumi) is at the subway station on his normal daily commute when he receives words that his estranged father has been hospitalized. Shinji's strained relationship with his unscrupulous father goes back many years, and the news awakens some unhappy memories. At that moment, he sees a person resembling his brother, who passed away forty years ago, leaving the platform, and he hurriedly follows. When Shinji steps out of the station, he finds himself in 1964...

cartmann Sep 29 2011 2:56 pm I agree with the first comment. The players are all convincing and watchable, but, What just happened here? Did they explain why dad is such a violent jerk? I was happy to be able to see lovely Aya Okamoto, nonetheless, and wish that she would find her way back to the business as her inclusion is always a huge bonus to each project she has appeared in. The main reason that I much prefer Japanese and Korean dramas to movies is that they have much longer to develop characters and stories into something that makes sense. If the audience is left still scratching it's head at the conclusion, maybe it would have been better to run a few minutes less of the closing credits in favor of a few minutes more of the actual feature...

the206 Apr 15 2009 12:24 pm Started out interestingly enough but all of the loose ends from first half of the film was taken care of by driving the last 30 minutes into utter non-sense. It is as if the writer just ran out of ideas on how to end the film. Acting was good but the script needed further development.