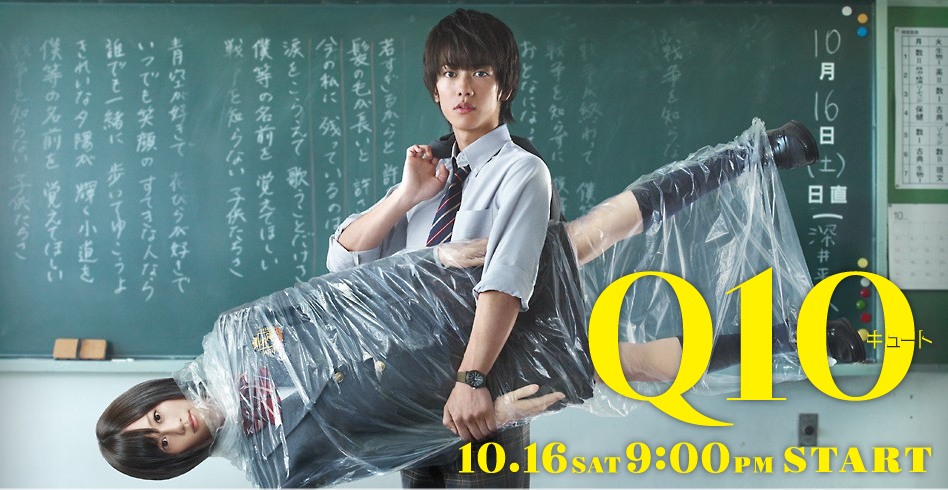 Heita Fukai (Takeru Satoh) is an ordinary, but timid, high school student who has no interest in love. This all changes when a new transferee student (Atsuko Maeda) arrives at his school. Heita discovers that the girl is actually a robot named Q10. The duo starts to cause trouble in school, while Heita starts to fall in love with the robot. This is how their story begins ...

One day Heita Fukai finds a girl sleeping in the science lab. When Heita touches her, she suddenly wakes up and opens her eyes. The girl was actually brought to the lab by the school's principal Jiro Kishimoto (Takehiko Ono). The previous night, principal Jiro Kishimoto, after a night of drinking alcohol, discovered the girl in the garbage. The drunk principal takes her to his home.

The next morning the principal notices that the girl doesn't breathe at all and he asks for help from Heita's homeroom teacher Tatsune Ogawa (Yuji Tanaka). Tatsune Ogawa recommends that they should hide the girl in the science lab. When they get there, they find Doctor of Engineering Kuriko Yanagi (Hiroko Yakushimaru) in the lab. Kuriko notices that the girl is actually a robot with human looks. A secret does exist within her.

The principal is afraid of a scandal and proposes a solution. They should keep this a secret and under the situation, Heita becomes the caretaker for the robot; not realizing that he has totally fallen in love with her...

bluelysia Apr 18 2016 8:31 am I was pessimistic seeing Atsuko Maeda in this since I don't like her acting in Hana Kimi (sorry abt this) but after watching first ep I think Atsuko as Kyuuto is really cuteeeee like awwwww.. Heitai is cute guy also hehehe I enjoy this and Heitai-Kyuuto interaction

rich durbano Mar 28 2015 9:28 pm It's not hard to see why Maeda chose acting. She has a wonderful presence and the camera absolutely loves her. This is one of her earlier efforts and you can already tell she has the makings of a wonderful actress. Very very talented young lady.

EWOcean Jun 18 2013 6:12 am Takeru Sato and Atsuko Maeda have honestly outdone themselves with the acting of this series. I have to admit, it was not difficult to skip 5-10 minutes of the middle episodes but like most Japanese emotional dramas, if you sit through the whole thing and try to ignore the weaker filming quality (when compared to Korean dramas), you can honestly feel and see the deeper meaning of the film. I am just completely blown away by how Atsuko Maeda can keep a straight face as Q10 the whole time. Mind blower man. I sometimes actually think she is an actual robot. :P

Yordan Agil Jan 05 2013 4:12 am When I see in first episode, I got interest when Takeru Satoh and Acchan got the main role of this drama. But when I see in the next episode until episode 6, it's very bored. Because I think this drama did'nt have conflict that tell between Kyuuto and Heita. But When I saw ep. 7, I was WRONG, this story have many mystery that unpredictable. I am understand when I saw until the End... It was Good Story...

wabagaba Jul 23 2011 7:48 pm The background songs are great. I really enjoy these old japanese music, the only problem is that they don't come with the ost. I had to listen and find them by the lyrics.

dia Jul 23 2011 6:00 pm this drama wasn't too good. i found myself skipping a lot of scenes especially towards the end. they didn't even conclude his friends & classmate's characters that well...-__- the girl who played the robot was pretty annoying especially her robot voice. i only watched this for sato takeru but what a disappointing drama for his first lead.

h1karu Jan 14 2011 2:57 pm Bought the dvd from chinatown and watched in 1 and a half days. Just like everyone I thought it was like zettai kareshi but in the end I found an uncanny similarity to Haruka Ayase's movie CYBORG GIRL...

josephine Dec 29 2010 10:59 pm @Pickledshoes nope ur not...hha this reminds me of chobits and zettai kareshi

Pickledshoes Dec 12 2010 10:38 am am i the only one who thinks of chobits when they read the synopsis