Poison Berry in My Brain 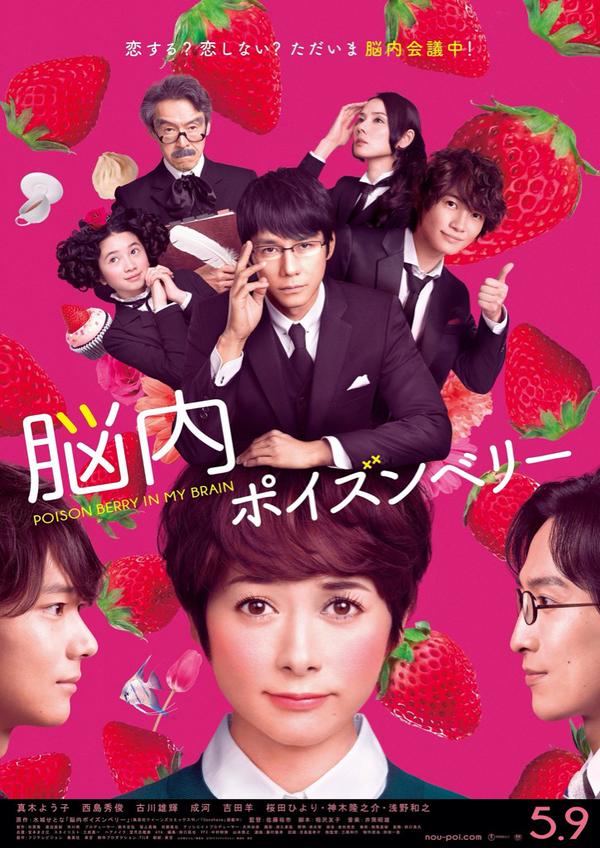 Ichiko (Yoko Maki) is a 30-year-old unemployed woman. She meets Ryoichi (Yuki Furukawa) at a drinking establishment. Even though he is a lot younger than her, she can't forget him. Meanwhile, Ichiko has 5 different characters in her brain that governs her actions. The 5 characters are Yoshida (Hidetoshi Nishijima), Ishibashi (Ryunosuke Kamiki), Ikeda (Yo Yoshida), Hatoko (Hiyori Sakurada) and Kishi (Kazuyuki Asano). These 5 character then have a fierce meeting.

Yoshida presides over the meeting as the chairman. Ishibashi is the optimist. Ikeda is the pessimist. Hatoko is the character that lives in the moment and Kishi thinks about the past.

lolo May 07 2018 9:56 am I haven't watched this movie...and I will just bc of Yuki. I am preparing myself after reading the comments below for a disappointing ending...which hopefully will not degrade my fond of Yuki.

felldowntherabbithole Jul 04 2017 4:20 pm I'm disappointed with those people placing their comments here saying they hated the ending because the lead heroine left Yuki. Wake up! This movie is such a breathe of fresh air. Based on what I'm reading from some of your comments you don't want her to leave Yuki because he's good looking. You know what, that's the only thing going on for him. Why should a good woman like Sakurai stay in a dysfunctional and damaging relationship? He's only pulling her down and he only likes her when he's the one getting all the good breaks. Sakurai accepted him in spite of his age, and lack of achievement and financial resources, with that being said, the only thing he can do for her is to be supportive and be proud of what she has accomplished. If he loves her, he will never get jealous of her success. If his feelings were true, it means he will rejoice with her happiness, but he never does because he is selfish. If the only reason you want to stay with Yuki is because he's good looking, well then, just proves to show why there are so many women in abusive relationships, they stay because of that person's good looks and they are worried they won't find someone else again. It's not love if you are being battered emotionally. It's not a waste to throw away a bad relationship, but it's a waste of your time to stay in one. Her brain cells decided to let Yuki go because they want her to be happy, that's what you called love. So I don't think anybody here should be disappointed with the ending. Yuki is good for nothing. She has given him plenty of allowances already.

Naomi Natalie Mar 04 2017 11:33 am I absolutely loved this movie. I loved Yuki Furukawa in Mischevious Kiss and stumbled onto this flick. I found it cute, funny and relatable. I swear the Hatoko character can take over from time to time when you see someone that you're attracted to. Lol. Love in your late 20's to early 30's isnt "easy". It can be stressful, especially when you feel like your working on a timer. It was interesting watching how the female lead develops from the beginning to end of the movie. I'm looking forward to seeing more movies by these actors. Really great work!

Mmeowrie Jul 23 2016 11:33 am At that 30 something age i think the girl should be matured enough to know her needs and not be easily blinded by love at first sight thing. She doesn't even know the guy well. I pity the guy bec the girl started it and ended it badly on the guy's part.. The guy doesn't want the girl to leave bec i think he needs someone to depend on - that's why he had relationship to older and successful women (my opinion). Ikeda's right for not starting the convo.

fritzy jane Apr 29 2016 8:54 pm It's been a while that i have seen a movie that made me come to my senses. it's interesting how it deviates from the conventional romcom thus, i love how logic was screaming to this movie.

very interesting! when you're 30 i swear you don't have time for drama and b*s*. you are not there to babysit a lover, you are there to grow old together. that moment when you finally realize that it's not all about skinship and attraction but more on being yourself while enjoying the feeling of being love and being inlove. hands down! and yeah... ~I am a big fan of Yoko and Yuki and they look superbly good together! <3

shows so much similarity with inside out, which i equally love. <3 i am a happy viewer! highly recommended!

Myra Apr 21 2016 5:34 pm I watched it last night since I really love yuki and kamiki but... kind a disappointed with it. I can't accept the fact that someone can leave yuki even though his character in the movie has so many flaws. :( (affected much)

Anyways, I'll have him all to myself, flaws and all.

Sayonara Feb 19 2016 3:51 am I'm not prefer the ending because the heroin only see in her perspective to end the relationship and NEVER CARE how the hero felt at the moment when he lost almost everything ;1) His studio (a place where he found all his idea)

Christine Oct 22 2015 9:35 am This is like the romcom josei version of Pixar's Inside Out haha

filmbeats Sep 20 2015 6:41 pm This is a pretty good and entertaining romcom that actually has some insight and isn't total fluff. Yoko Maki is great in the title role and shows some good comedic skills. Quite different from some of her more previous roles I've seen. Yuki Furukawa is as expected convincing as the love interest. The five actors who play different roles in the title character's head are the most entertaining.

xinnia May 26 2015 3:31 am Though I'm not Japanese yet I enjoy Japanese movie so very much and tho one Is beyond my words.

kino Apr 20 2015 9:49 pm There are Nishijima Hidetoshi, Maki Yoko, Furukawa Yuki, and Kamikiiii~ Must watch this!! Btw, i just knew that this is the one they said similar to Disney's "Inside Out"

Paradyta Dec 09 2014 6:52 pm The synopsis looks like indonesian movie called "belahan jiwa" in 2005, but in different approach. This woman has 5 defferent characters which consist of male and female character and it makes differentiation with "belahan jiwa". All right, im waiting for this movie

Anna Xie Nov 09 2014 2:16 pm Koniichuwa Yuki Furukawa watshi no namewa Anna desu um ano watshi anata aishteriu datte anata honto no kakuwi eto tsuyoku Hello yuki Furukawa My name is Anna and I Love you because you are really strong and handsome I hope you could meet me in the UK I know this kind of request is stupid but it would be really nice if you could I LOVE you even though you have already got a girlfriend but you are 13 years apart from me Hope you read my comment :-)