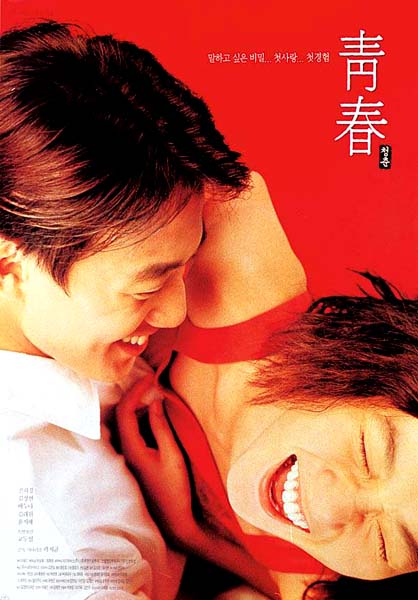 One boy falls headlong in love with his teacher, the other is seduced into his first sexual experience.A tender coming of age story about two teenage boys who embrace growing pains the hard way.

First Sex -- Nothing Like the Movies. Packets of plum blossoms blanket Hadong Town. After a teenage boy named Jayo transfers to a new school his junior year, a rebellious girl named Hara, who's of the same class, tries to seduce him. Unable to restrain his teenage hormones, Jayo finally decides to have his first experience with Hara. But the moment after Jayo loses his virginity, he becomes frightened when Hara tells him that she loves him. Jayo continuously avoids her while Hara, who was always obsessed with Jayo ever since she laid eyes on him, becomes devastated by his indifference and then later commits suicide at school with all her classmates and Jayo to bear witness. After this dreaded day, Jayo immerses himself in loveless sex with several women while he's in college until he meets Namok, who reminds him of how to love again.Trying desperately to heal his wounded spirit, Jayo, however, finds it difficult to retrieve the innocence he once had.

First Love -- A Heartbreaking Experience. Jayo's best friend and classmate, Seuin, falls in love with a new teacher named Junghae. But the hard line between teacher and student pressures Junghae to unwillingly reject Seuin's adoration, leaving him utterly heartbroken. This pain carves deep into Seuin even long after he graduates and enters college. Seuin later gets involved with an older woman at college to get Junghae out of his mind, only to find his feelings for Junghae getting stronger. After sending countless letters to Junghae, he tries desperately to face Junghae one last time to settle things once and for all.

kat Jan 21 2014 5:18 pm this movie was sooo awesome....i wish it was in english though it would have been even better ....but put that aside it was a really good movie I LOVE IT

Edge Dec 02 2013 3:26 am I'm with Terri K on this. The synopsis attempts to sell this as a coming of age story blah, blah but whether it was intended or not, the movie does focus on sex, suicide and love (almost in that order). I think Nisse is over analyzing the movie and trying to find some sort of obscure metaphorical value where none exists. I have read other reviews (all from apparent experts) and the common thinking is that the suicide events are gimmicky at best, a tired mechanism (common in Korean movies) for creating dramatic flair. Calling this semi-entertaining movie 'art' is a stretch.

Nisse Dec 30 2011 1:00 am Actually I highly recommend that future viewers of this film watch for themselves. Also it helps to a have a slight basic knowledge of how sex and relationships are viewed in Korean society to better appreciate the film (though even without such knowledge a simple open mind will do wonders). Barring that I do not agree with commenter one. Actually both stories in this film are a nice juxtaposition on how young people sometimes will define their lives very narrowly, based on a single moment in time. How when you are in high school and/or young--you believe everything right in that moment is your everything for the rest of your life, because of being so close to adulthood in BODY (but perhaps not in mind).

Additionally I believe the first commenter sold this movie very short by just focusing on the "love" and "suicide" aspects of the film. Nothing in this film was really about "love", "suicide" or "sex" those were merely catalyst for the characters motivations, and outcomes of their final decisions. Neither was this film specifically "depressing" (given the various dramatic Asian cinema to be found as a whole, this on a "depressing" scale was mild.). The film should be looked at as what it was, an art piece. Not referenced in an "if this was reality, they would. . . blah, blah." This is not about reality, it's a film meant to convene a bunch of different ideas in a small amount of time. It's meant to make you think, and ponder--not compare it to reality. It's drama, not a documentary. Realism is great when you get it, but not at the expense of artistic voice.

Terri K Dec 27 2010 12:13 pm 2 suicides in one movie both over sex is a little much. I thought the movie was awful. Life is not THAT depressing. I mean a girl who practically forces a guy to have sex with her is not likely to go kill herself - it's most likely a quieter type, one that bottles everything up not one that takes out her anger and frustration in sex. AND he was not her first time nor had they had a long term relationship. It was a shallow relationship so her committing suicide over it isn't realistic. 2nd, Killing oneself over being told to grow up some more by the woman you love is unrealistic. Why would he commit suicide after she had sex with him but told him that he needed to grow up some more? That's a reason for hope not despair. I think that who ever made this movie - and whoever wrote it - just wanted to vent their own despair with life because misery really does loves company. I wouldn't recommend this movie at all. It's unrealistic not to mention depression. Come on...ending with a suicide? Someone just loves depression.