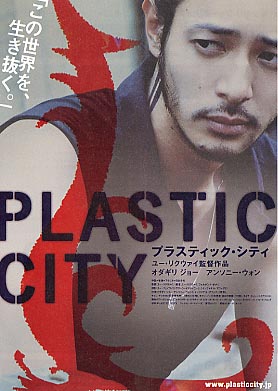 An enigmatic orphan, Kirin becomes the adopted son and right hand man of Yuda, a "nouveau riche" Chinese in the area. The film opens with the rise of Kirin to the height of power in Yuda's black market empire. Kirin inaugurates their fifth shopping center in Liberdade. A few blocks adjacent to the mall, Tetsuo, a Japanese Brazilian worker, is organizing a protest against the Asian mafia. When Kirin meets Tetsuo, Kirin admires Tetsuo's zealous commitment and begins an enemy-friend relationship with Tetsuo.

At night, Kirin drives himself to Happy End, a night club, to meet Rita and show off his fancy counterfeit - a Fendi velvet jacket. Not long, Yuda is arrested after he is caught on video offering a bribe. As Yuda's empire is being disbanded, Kirin has to fight this war single-handedly against both the enemy Yakuza clan and the federal police. Exhausted but determined, Kirin is determined to rescue his adopted father Yuda. At a critical moment, Tetsuo appears and joins forces with Kirin.

As Kirin and Tetsuo hit the road for their war, Kirin receives a mysterious message from Yuda telling Kirin to surrender. Blood runs out from Kirin's palms and terrifies him. Not long, the military catches up with Kirin and Tetsuo and corners them at the top of a building. Kirin jumps off the building and vanishes into the Rio Pinheiros canal.

One year later, under an abandoned old building, Kirin is in a solitary retreat. He is now a homeless person living in a cardboard box. He has transformed himself into someone else. One night, he goes to see Rita but she only asks Kirin coldly why he is still alive. Stunned by Rita's indifference, Kirin collapses. Blood again runs out from his palms.

When Kirin wakes up, he looks around the world with anger. He is alone and desperate. He realizes that he must go find Tetsuo and decides to take revenge against his own God, the God who has created him - Yuda, his adoptive father.