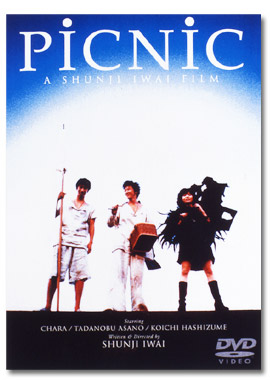 Director Shunji Iwai follows up on the wild success of his star-crossed romantic drama Love Letter with this slick, brooding tale about a trio of mental asylum inmates and one really long wall. Koko (played by pop icon Chara) is placed into an institution after she embarrasses her rich family by killing crows. Sporting a skimpy black dress and a crow's feather boa, she believes that the world was created when she was born and will end when she dies. At the institution, she befriends Tsumuji (Tadanobu Asano), a lad who killed his bullying teacher in a fit of rage and is now haunted by his ghost. After reading a Bible that a priest had given him, Tsumuji becomes convinced that the world is coming to an end. His friend Satoru (Koichi Hashizume) is a quiet retiring sort who is obsessed with rules and who compulsively masturbates. One day, this strange threesome decides to leave the asylum and have a picnic before the world's eminent end. Sensitive to Satoru's neuroses, the trio doesn't hop the hospital walls, but instead walks on top of them. Fortunately, this wall happens to be the longest such edifice this side of China, as it extends to the sea. There, their own personal apocalypse unfolds.