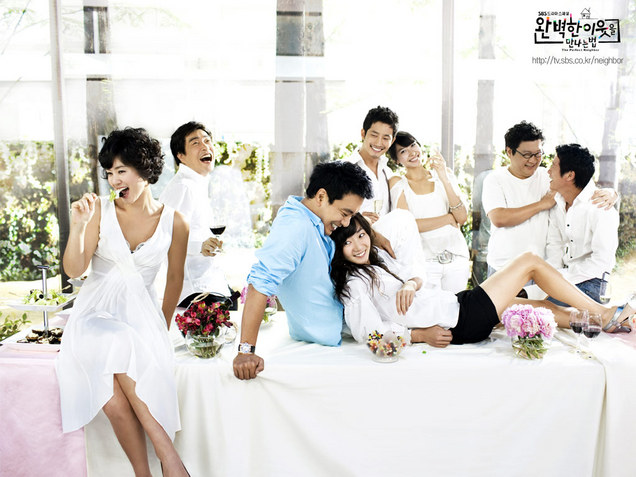 Mi-Hee (Kim Sung-Ryeong) brings her sister Yoon-Hee (Bae Doo-Na) along to a trip to Cambodia after hearing that Soo-Chan (Kim Seung-Woo), a former handsome con artist who became a promising college lecturer, is going to travel to Cambodia to play golf. But when she sees Soo-Chan with another woman at the airport, she becomes very disappointed. While on his way to marry a bride in Cambodia, Deok-Gil (Son Hyun-Joo) meets Soo-Chan, the man who ruined his life, at the airport. Not only does he get in a bad mood from seeing Soo-Chan, but to make matters worse, he is stuck in the economy class section while Soo-Chan is with a rich woman up in the business class. Yoon-Hee gets angry when she learns that the woman accompanying Soo-Chan is married and the daughter of the college president. She lectures Soo-Chan to stop seducing women for pleasure like how he seduced her own sister. Deok-Gil, who was rejected by his Cambodian bride after flying all the way to Cambodia to get married, sees Soo-Chan with another woman and flies into a rage before collapsing. Soo-Chan discovers Deok-Gil lying on the floor and overhears him mumbling in his sleep that he has no luck in wooing women. Soo-Chan feels pity for Deok-Gil and decides to be his love coach. Thanks to Soo-Chan, Deok-Gil gets married to a beautiful Cambodian girl and returns home as a happy man. But Deok-Gil finds out that he was swindled out of his money without getting the bride. He barges into Soo-Chan’s home with his son and moves in with him. As Deok-Gil, Yoon-Hee, and Mi-Hee get involved in his life, Soo-Chan, who was liked by all the wives at the company dormitory complex, faces some complicated issues…

The leading actors are not "the leads"

dramanut Jun 07 2014 11:49 am I watch this drama because of the actors and actresses. It remind me the movie "pretty in pink". I like it. There are a lot of subplot and messages that the writer did a good job on it.

mimiya Apr 25 2014 6:17 pm This drama was very good and it got better and better. It started with a strong feeling of "Desperate Housewives" w/ the pristine neighborhood and gossipy women and a murder mystery. The writer is excellent in creating realistic and complex characters. I loved all the actors, and this was the first main role for Park Si-Hoo. It catapulted him to fame..... (****Spoiler****and just like in another drama of his(QR), fans wrote in and the writer changed the end of the script for his sake****Alert****)..... His acting was very stiff at first, seemingly nervous, towards the end, he relaxed and showed some of the talent to come....Someone below did not like his character, I think it was an awesome character: the only "alcoholic" in a drama-land that glorifies alcohol...He is meant to be "weak", but notice how w/ the right support, he gains strength....Great romance also... The writing is excellent, lots of subtle insights and for-shadowing...This drama is very much under-rated, it is intelligent and mature, I highly recommend it.

Bonnie Lynn Katzell Muench Jul 15 2013 10:08 pm Jung Ji-Woo is an excellent writer and I have seen several of his dramas and I am very impressed with his writing...I can not accept what this last reviewer has to say I am only in the beginning of the show but I will write a review of my own accord when I am done seeing all the episodes...

alee May 06 2013 10:02 am Disappointing. Bae DooNa's character is such a ditzy, an airhead. Park SiHoo's character is seriously in need of help and got help from an airhead. Both Bae and Park overacted: one so hyped up and the other so cold. Kim SeungWoo was the one who saved the show, along with the 2nd Leads of Son HyunJoo and Kim SungRyeong. This show did start out very well, with really good dialogs and chemistry between Bae and Kim SeungWoo. Their chemistry did last throughout the whole show (after all, Kim SeungWoo is a great actor). However, the writer took the story off in a different direction and had a strong woman (Bae) falling in love with a weak and cold fish (Park) ... unrealistic story.