One Million Yen and the Nigamushi Woman 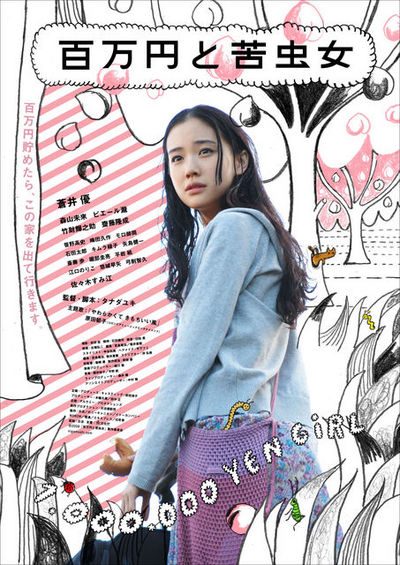 Suzuko Sato (Yu Aoi) is an unremarkable young teen that has trouble fitting in. While her younger brother is often praised for his smarts, her family & neighbors have nothing to say about Suzuko.

One day at work, Suzuko’s co-worker offers to become roommates with Suzoko. Suzuko jumps at that chance to move out of her parents house and they set out to find an apartment. Unfortunately, Suzuko’s friend never mentions her plan to have her boyfriend Takeshi live with them – until after they sign the lease on their apartment. Making matters worse, on their big moving day Suzuko finds her co-worker a no-show but her boyfriend Takeshi (Ryusei Saito) sits glumly in the apartment. It turns out that the couple recently experienced a falling out, with the boyfriend still intending to move into the apartment without his girlfriend. Things then hit the boiling point when Takeshi throws out Suzuko’s cat. Suzuko retaliates the next day by throwing away all of his belongings and then quickly moves out before Takeshi returns.

The next day at work Suzuko is visited by detectives who ask Suzuko to come in for questioning. It seems Suzuko broke the law by throwing away Takeshi’s belongings and because of she is fined and receives a criminal record. When news of this spreads to Suzuko’s neighborhood, Suzuko suddenly feels even more alienated. She then decides to save up one million yen with the goal of moving out of town. Suzuko then plans to find another job, save one million yen, and then move on to the next town.

ace Jan 14 2015 9:31 pm I must admit I'm no fan of cats. At all. But they really set up the tipping point very well with the heinously loathsome roommate. To think he actually got compensated made me so angry. It took me a while before I could refocus on the movie. The injustice rankled me so much it is kind of funny. Rarely have I hated a character so much so fast. Hats off to that whole sequence.

It was a delight to see her going through the vicissitudes of life and emerging as a well rounded person. While it is certainly a rather low-key show it is also rather powerful. Thanks mostly to Yu Aoi.

Ki Jun 06 2009 4:01 pm There’s a lot of coming-of-age road films out there, but there’s not many that features Yu Aoi in the lead role. That in itself should pique your interest in Yuki Tanada’s “One Million Yen and the Nigamushi Woman.” When I first took a brief glimpse at the scenario for the film, I instantly had visions of Yu Aoi playing an ex-convict running from the law with pistol in hand. Well maybe that movie will be made someday (hopefully by Takashi Miike, Hiroyuki Nakano, or Kazuyoshi Kumakiri), but it’s not what “One Million Yen and the Nigamushi Woman” is about. Instead “One Million Yen and the Nigamushi Woman” is a film told from the distinct perspective of a talented female screenwriter/director, wanting to recreate all of the internal angst that comes with adolescence colored with moments of light comedy, drama, and romance.

The story found in “One Million Yen and the Nigamushi Woman,” doesn’t break new ground nor does it have any intention to do so. As the film breezes through its four major movements: 1.) Suzuko Sato’s eventual departure from her hometown 2.) Suzuko’s first stop in a small sea-side town 3.) Suzuko’s next stop in rural peach village 4.) Suzoko’s return to city life, first love, and her eventual departure, you can’t help to sit goggleeyed as watch Suzuko’s transformation from a frail young youth to an adult able to stand up to the world. The film also teases the viewer with the possibility of a fairy tale like ending, but typical of the movie’s understated sense of humor, reverts back to reality with a witty line from Suzuko Sato. Making things all the more enjoyable, you’re treated to Yu Aoi’s best performance since “Hana & Alice.” This is certainly her most low-key performance in quite some time and it really allows all of her talents to come to the foreground naturally.