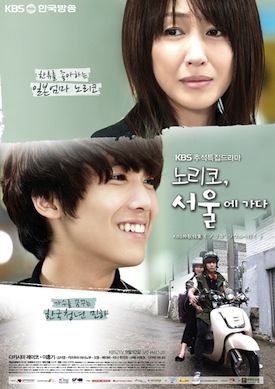 Japanese housewife Noriko Mori has been married for 17 year. She's also a huge fan of Korean pop singer Kim Hyun-Jae. Her quiet husband Hiroshi (Masanobu Katsumura) and daughter Miyuki (Manami Ikura) doesn't understand her fascination with the K-pop singer. One day, Noriko is diagnosed with lung cancer. Making matters worse, Miyuki says she quit athletics at her school. Hiroshi doesn't take Miyuki's decision seriously, but Noriko worries more and more about her daughter. At this time, Noriko hears of an audition being held featuring her favorite singer Kim Hyun-Jae as a judge. In order give inspiration to her daughter Miyuki, Noriko decides to take part in the audition. Noriko then goes to Seoul ...

nadhira Oct 27 2011 8:02 am I really loves this drama movie ! :) I love both japanese and korean, I love lee hongki too~ this drama show us harmonisation of japan and korea through people, and it's really nice ! We're human should life in harmony, right? ^^ and, about the story, it's simple but means a lot and can make me smile. Really nice movie. Woaaa I really want to go to seoul too~