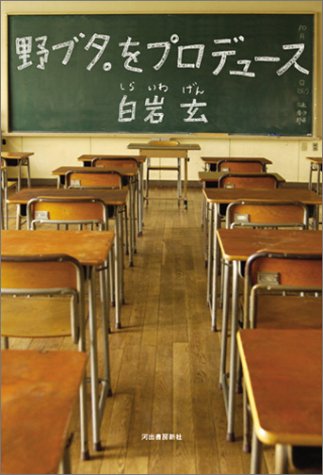 Shuji Kiritani (Kazuya Kamenashi) is one of the most popular guys in his school. He is pretending to care for all of his classmates,but deep down, is quiet and doesn't open up to others.But for some reason,when his eccentric classmate Akira Kusano (Tomohisa Yamashita) is around, he can show his true self.

One day, a new girl from another school comes to Shuji's classroom.Her name is Nobuko Kotani (Maki Horikita).Nobuko=Nobuta. Fromher gloomy looks, she begins to get harassed by the class bullies in no time.The harassment was devastating.Her lunch gets ruined, she gets a vase of flowers on her deskmeaning she had died, and she even gets water splashed while she is in the toilet booth.After knowing that the bullying is by Bando (Fumiko Mizuta), Shuji and Akira advise Nobuko to try to harmonize with others. But Nobuko tells them that she has tried to do so in the past,but every time it turns outmiserable. Shuji tells Nobuko to have a more positive attitude, and he protects Nobuko from the harassment.However, he feels that the bullying won't stop that easily.

Hearing about this, Akira comes up with the idea to makeover Nobuko from her looks to her personality, so that she'd become one of themost popular girls in their school.That way, there's no way the bullies can harass her.And so Shuji and Akira's greatmake-over begins... A Cinderella story which portrays the social life of Japanese teenagers.Can this gloomy girl really become popular in her school?

Henna Jan 24 2022 3:06 am I love the drama . One of good high school jdrama . For EP 1 I think it was a bit boring so I have dropped it before ( maybe cause I have skipped some scene ㅋㅋ) And after I tried to watch it again on Netflix , i just realized this drama is really goodddddd ! The storyline and how funny they were . The friendship is really touched me . Nobuta power chunyuuuu~ I love how cute Nobuta acted ( maki horikita ) i really hope Akira would confess his feeling to Nobuta but he just gave up or didn't he ? I really love him . Just a bit confused . Did suji like Nobuta ? The last ep makes me confused . I will watch it again to confirm it. I want a sequel for this but it might can't be true cause Maki horikita already retired . Kinda sad cause I love her since Hana kimi . Recommended and I gave this drama 9/10. Maybe would give it 10 but the ending made me sad . Kinda happy but sad . Open ending

Ira Jun 20 2020 11:41 pm Pure classic. Loved this drama forever and i remember the first time i watched it back in 2008 wow so old. Hoping for the reunion to be true. Nobuta power, chunyu

Jpoper Jan 28 2020 7:26 am This was a classic. It was not comparable to any drama because it was the first of it's kind when it aired.

jon Aug 02 2018 10:42 am This truly one of the best youth oriented shows. Story is realistic and meaningful as possible. Doesn't need overacting nor extreme melodramatic moments. Decent performances from the leads too. 10/10 in the slice of life category.

Seeeol Jul 12 2018 9:18 am People who are saying that this is boring probably doesn't have any taste. Btw, awesome drama. Unique <3

reakor kharkrang Oct 17 2017 7:49 am a really.amazing drama.that shows you don't need love story and love love triangles to make it popular. friendship is something ivr treasured more than friendship and so is this drama

Starry de Beniza Mar 29 2016 10:20 am This drama is so lovely, to tell about friendship and teen's feeling, to once time we're full of questions, all dream, love and the future, and I like it! ♥

Swara Mohan Mar 13 2016 4:49 am No Words to describe the after effect of completing this show. It left with tears of happiness. The story is so realistic. Its touchy. What a great finish it has.

Tomohisa Yamashita plays a eccentric guy Akira who wants to be friends with Shuji. Though he is rich,he likes to live like dime on street.

This drama is about friendship between three people.There is melodrama or over the top scenes. Everything seems natural. The girl Nobuko(named as Nobuta) doesn't undergo any dramatic change. The change seems gradual and realistic. There is no heavy-duty romance and love triangle as such. The school premises are set realistically and change that happens in the three people's life is gradual. You can understand and feel all the three characters.

Its a rare gem. Very few stories are written so well.Acting is top notch. Though the support cast is good,the lead three actors shine in their roles.

kenny Jul 13 2015 1:05 am Tearful last episode shouldve ended it happy. More Dramas should be about friendship. Friendship can make you cry as well. Their friendship is so strong. I love all of the actors in this drama. The soundtrack during the episodes make it more sadder. BEST DRAMA EVER!

ester grace Feb 07 2015 9:03 am One of te most memorable & meaningful school drama that I've ever watched. The storyline is not cheesy like others same genre but unique & brings a different feeling to the viewers. I feel very close to shuuji, akira, nobuko & also their surroundings. I admire their friendship, no matter what happens as long as they think of each other, everything will befine!! The drama is not only a lesson on friendship but also on many different sides of society, such as violence in school, racism, money, wealth, etc people feel lonely in this wide world, have to fight by themselves to survive; there's what friends for, without friends, they'd be lost their paths soon or later. The cast deserves much appreciation esp the trio Kame-Maki-YamaPi all showed their best performance here. I don't think anyone could play the roles as them! kon kon!!

沙昼味 Oct 19 2014 8:26 am This is a really nice and moving drama. You can fell the warmth and good-feeling as you watch it

el Dec 05 2013 4:40 am I'm originally a K-dramas fan, but lately i got stuck with some awesome J-doramas..nobuta wo produce was my first fav.J-drama ever. i reaaallly like the casts chemistry..my fav,, all of them! watching it just like watching my personality split into 3 of them.since then i keep up with other good J-doramas like Ending Planner, Osen, liar game, etc. i just want to say that both K and J- dramas are unique on their own. neither is better than the other,.^_^

Person Nov 11 2013 11:54 pm Prior to watching Nobuta wo Produce, I had seen Gokusen (season 2) in Japanese class the previous school year. To be honest, Kazuya Kamenashi was the reason I watched this J-drama. I really enjoyed the drama as a whole; I was able to relate to Nobuta (generally because I have similar personality traits as her.) My favorite characters were Akira and Nobuta.

Prima_Optima Apr 03 2013 7:39 pm I like this drama because you learn a few things along the way without getting that "preachy" vibe. Impressive script, impressive actors. I'm a J-drama addict now! =)

J-drama_forever Feb 17 2013 5:33 pm @Hater, you suck. you're just comparing japanese dramas to your favorite koreans. anyway, korean dramas are just a cliche and copycat to j-dramas. even their music.

better to watch other school's dramas like my boss my hero :) 10/10

LoveHurt Jul 02 2012 12:17 pm I really liked this drama. I said it once and I'll say it again, Japanese Dramas are the best. I enjoy watching dramas that are realistic but are unique in their own way. I liked how all the main characters overcame their own struggles. What I liked the most was the fact that Nobuta remained herself until the very end instead of becoming somebody completely different. I've never been a big fan of Maki Horikita but she did a good job in this drama. I especially liked Yamapi, he was hilarious and super cute. Kazuya did a great job as well I've been a fan of him since Gokusen it was nice to see an outgoing side of him. This story was very heartwarming and I'm glad I watched it. I'm going to remember the Nobuta Power! and Mayonaka-Sama lmao.

Anonymous Sep 28 2011 9:36 pm IMDB says Natsuna Watanabe also was part of the cast for this show and I've seen other sites claiming this was the show she started her career in... is this true? If so, what was her role/who did she play?

Pain Oct 06 2010 8:34 am Kazuya and Yamapi are explosive together and surely showed in this drama that they have the nack for comedy

Gallya Feb 13 2010 9:01 am This is one of the best Japanese drama that I have watched. Yamashita and Kamenashi are the best as usual, but I'm kind of disappointed of Hirokita Maki. I don't think that she is the right one for the role!

Mitzmin Aug 11 2009 9:14 am I love Yamashita, his role as Akira is cool. The drama is nice, though I think it could be better. The end sucks. If you haven't watched I think you should give it a try.

because thats my idol....