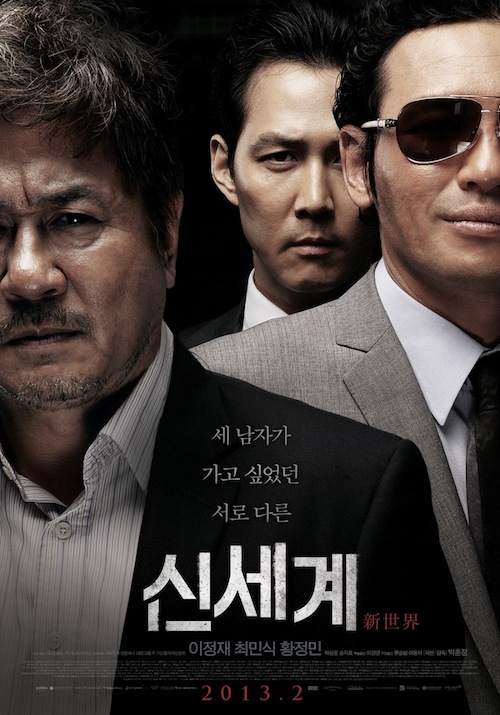 Police Officer Ja-Sung (Lee Jung-Jae) is selected to work undercover for the National Police Agency. He joins the powerful crime organization "Goldmoon" and eventually becomes the right hand man of the #2 guy Jung Chung (Hwang Jung-Min) in the crime group.

Meanwhile, police officer Ja-Sung wants Kang Hyung-Chul to keep his word that he can go back to the police force now that the Goldmoon group crime boss is dead, but Kang Hyung-Chul needs Ja-Sung for operation New World. Ja-Sung becomes more disillusioned with Kang Hyung-Chul's obsession with operation "New World" and torn over his loyalties to #2 crime boss Jung Chung. 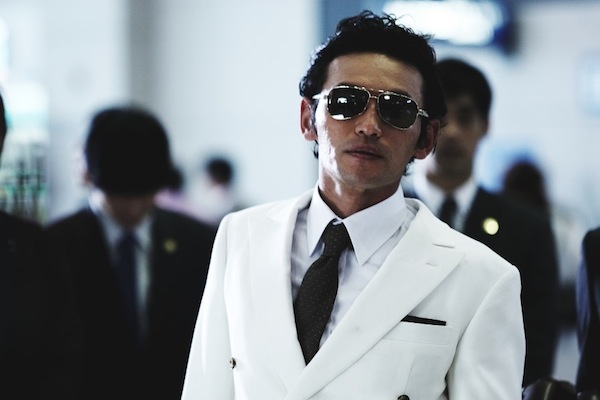 Nikki Oct 26 2020 8:02 am 9/10 for me. Really daebak movie, I loved it! I watched this as I seen it being talked about on Knowing Bros. My favourite was Park-Sung Woong & Hwang Jung-Min, they were hilarious. I feel that if you speak Korean you would enjoy this movie even more. Overall, this movie is proper 깡패, has plot twists, sad moments, comedy and a great storyline. Cast was amazing. Really enjoyed this will re-watch it in the future again.

My favourite part was the car park scene between Park Sung Woong & Hwang Jung-Min :D "you need to work on your sense of humour" "shit, I think I pissed a little" :D :D :D

Tokki Feb 12 2020 11:08 am Pretty great movie. It was really sad to see how things were unfolding, but that's the sad reality of a ghost operation at times. I think other films have tried to repeat a similar telling, but I think only Asura really comes close. This is a rather dark film that keeps you anticipating.

CreatorWu Oct 12 2018 4:14 am I will forever love this movie. Although now it is my second favorite movie, it was my first for almost 5 years, I just absolutely enjoyed it and smile everytime I think back on it. After this movie, I became a fan of Hwang Jung-Min. If you like crime/cop movies you should seriously try this.

Prashast Singh Dec 13 2017 7:47 am Had huge expectations but was highly disappointed right after few minutes. I just wanted it to be over as soon as possible. I have seen much better crime dramas, and while I also expected a LOT of action as the trailer seemed to show an out and out action film, I felt deceived.

Ok, leave the action aspect. Even the story was not well written. It would have been a great story about conflict between cops and the mob but it was more of a melodrama about a character who can't find anything good to do. He, and other characters do nothing except simply talking, talking and talking. I like movies of this genre but I sadly couldn't see any story here at all. A thriller? Definitely it isn't one.

I was shocked because this was the first and perhaps the only South Korean "action thriller" which bored me to the core. I have seen plenty of South Korean movies and most (rather all) of them are action, drama and thriller films. I liked them all, but this is the only film I disliked, and that too to the core.

For me, relief came only in the form of one action scene. And the pleasant music.

I still don't understand what's so special in this movie. There's nothing that is really good at all. It only further adds to the confusion when I see people calling it "the best movie ever." This is seriously NOT the best film ever. South Korean filmmakers have made much better stuff than this. Examples: Inside Men in 2015 and The King in 2017.

So I would rate NEW WORLD as:

tim Sep 05 2017 10:39 pm who would expect such ending, i must admit that the acting is outstanding, and the plot is solid. second time watching Lee jung jae since "big match", looking forward to his up coming projects. this one is a must watch

xxabixxx Jan 16 2016 1:42 am woow. daebak. this is the best korean action movie i've ever watched. i can't predict the ending, the plot is really great, and the actors really made the movie outstanding. i come to like lee jung jae in this movie, but every actors here are really the best. 10 of 10

L.W. Jan 29 2014 3:10 pm @MMA, ma deong suk is one of people who having breakfast with lee joong goo just before joong goo get arrested

L.W. Jan 29 2014 3:06 pm Nice ending, best gangster movie i have ever seen. I dont really like this kind of movie bcause the noise of gun and anything, but the cast's acting covered it up. Especially hwang jung min. I like both ahjussi, hwang jung min and lee jung jae :)

SE Aug 05 2013 9:11 pm I'm a professional screenwriter and producer. And I can honestly say, this movie was better than 99% of all American films this 2013 year. This film comes very very close to being as good as Tell No One, the French movie, with American writer, Harlen Coben. This is a must see movie for the fan of cop/mob dramas.

ed Feb 27 2013 1:33 am Hwang looks very promising indeed. In the past he has reminded me of John Garfield - can't put a finger on it, but he truly does. This looks like his Force of Evil. Can't wait!

Ki Feb 23 2013 11:49 pm Came away pretty impressed with "New World". Movie is definitely influenced by "Infernal Affairs," but not a remake. Actor Hwang Jung-Min really stood out for me in the film. I think it's his best performance in several years. The other two leading actors were both good as well. There's quite a bit of dialogue in the first half of the movie as everything is being laid out on the table so to speak and second half things go into overdrive. Will watch this one again whenever opportunity arises.

Ki Sep 20 2012 2:19 am @TOK - "New World" is the literal title of Korean title "Sinsegye". More than likely they will give an official English title sometime closer to movie release date.

TOK Feb 10 2012 8:57 am The Castings are Superb! but the title 'New World' is not really compelling. May be 'Under My World'? or 'the Ranking World Law'? at least something that we can able to remember the movie just by the name.