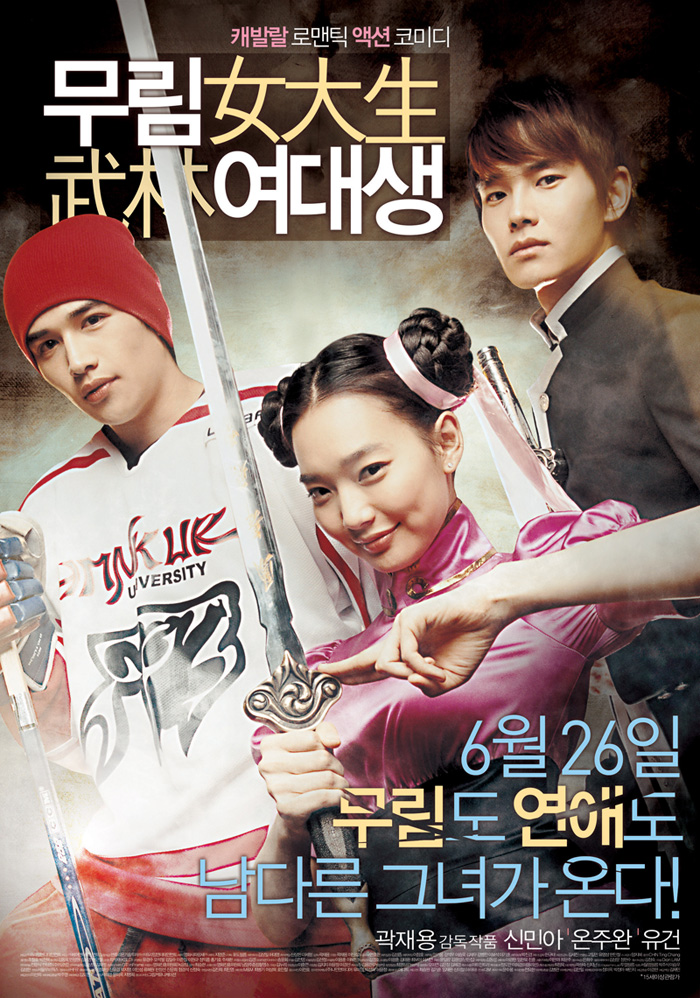 Kang So-Hwi, a beautiful martial arts prodigy, is about to embark on a journey into adulthood. But her journey is like no other. Her super-human strength and martial arts prowess scares away her fellow undergrads and even the boy she has fallen for. Devastated, So-Hwi decides to give up martial arts and takes a different path. Her father, a martial artist himself, is afraid of losing an heiress to the family’s martial artistry, and missions So-Hwi’s old buddy Il-Young to persuade her to stay in the field. Meanwhile, the evil Heuk-Bong provokes a war to conquer the martial arts world with the legendary Fine Blade he stole in the past, killing every swordsman one after another. So-Hwi’s father comes to a showdown with Heuk-Bong, but the battle leaves him fatally injured. On the brink of her father’s death, So-Hwi picks up a sword again with a burning desire for revenge. 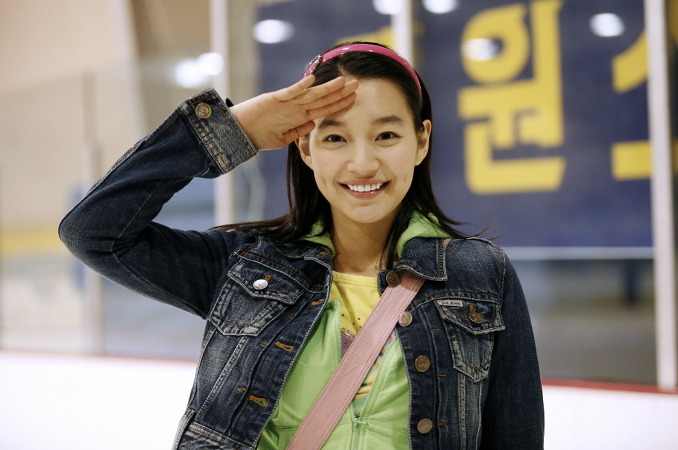 Terry Jun 21 2021 7:37 pm I have no idea why I liked this movie. It was beyond cheesy and the fight scenes were dumb and unrealistic. Maybe that is why i couldn't stop laughing.

Ree May 21 2014 9:29 pm This movie doesn't take itself seriously. But that is not the problem with the movie. The problem lies in the fact that it didn't have focus or direction. Instead of focusing on any one thing, the movie just keeps jumping - whether it be from the martial arts history of the families, or the relationships between the protagonist, her childhood friend, the hockey player and the cop or the whole hypnosis angle.

1st half was good with the comedy and progressed fairly well with things coming undone in the second half.

Also quite a few plot holes. Pretty good acting with a poor script. However despite that, this was not Shin Min-A's best effort. See some of her other movies or tv shows to know what I mean.

Wendilynn Feb 16 2014 5:21 pm I watched this on a lark on You Tube, had no clue about what it was about. The introduction caught me about mind language and then the rest of the movie goes to college and I forgot what the intro said until the end of the movie when it FINALLY pulls it all together and this movie changed from a mediocre college film about a strong girl with a crush to an awesome movie about connection and salvation.

This movie was better than it had any right being. Good job to our actors.

Sammy Dec 07 2013 9:02 pm Brilliant acting, directing and just about everything apart from the majorly flawed storyline. This movie had so much potential and I understand what the writer was trying to get across but it felt more than half of the movie was completely pointless. It was funny at points but then there was an overuse of humour and storyline was all over the place. But actor/actress plus amazing directing really carried this movie.

Ashley Apr 09 2013 8:13 pm I loved this movie it was so funny. I couldn't stop laughing when So-Hwi and Il-Young fought the gangster guys. Loved their camouflage and I thought II- Young was soo cute and funny when he came to visit. I think I might rewatch the movie before I go to bed today, and the guys are good looking but I still like II- young the most

Bladepanthera Oct 24 2010 9:09 am I think some of the previous commenters have missed the point of the film. It was essentially a parody of romantic/martial arts films! I mean, some parts you really can't take seriously! For example.... sign-language martial arts???? I like how it's done in such a serious way, but considering the content you really can't take it seriously... like when they have the amazing 'wire-fight' in the field and Il-yeong says something like "...So-hwi.... I'm talking to you through telepathy..." that just cracked me up XD - it's amazing how it turned from the girl-trying-to-fit in to a more martial arts theme with the amazing fights, but it never loses its true meaning which is the situation around So-hwi. I don't know how to describe the rest in words, but this is definitely a 5* film! I hope others enjoy this as much as I did. :)

Celeste Mar 20 2010 10:09 am Well, I watched this before Chinese New Year. It was on TV, and I'd just got back from school. Apparently my brother was watching it. And it just started, so I just sat straight down and start watching. It was so amazing from start to ending. It was packed with martial arts yet it was also a quirky love story. I really enjoyed it. And after that, I looked everywhere for the DVD! I'd watched it on the computer the second time after on the TV. And well, I was craving for it more! :D This was a really interesting movie. Oh, I even cried at the ending, even till now! It was so sad, and not to mention the guys are HOT. Yeah.. The girl is quirky and funny too.

Steph Feb 04 2010 8:08 pm Love this movie. Bought it like two months ago and finally got it! After watching it on a tv instead of a computer I picked up on so much more!! Too amazing! I wish there was a sequel though. I'd love to see what happened between Sohwi and Ilyeong!

Samia Dec 06 2009 11:34 am This was an awesome film. It was not what I expected at all and a lot better! It mixes old and new martial arts and modern sport in a way that makes them all fit. I am recommending it to others!

Syahadah Oct 01 2009 9:39 pm From Malaysia. I love this movie. Ending makes me cries. haha. Coz I placed myself as that girl, to fight own best friend?? And also, I thought the hero would die. And also, da power of tears.. wah. And to understand, our real soul mate, maybe not the one that we admire lotz.

because Allah know what's best for us And the power of pure tears cause an amazing result.. and for sure servants of Allah who cry pure tears for Him, they'll get amazing result in day after..To be with Him..and to have paradise

Nalyah Jun 16 2009 12:36 pm When I started to watch this movie I expected something totally different. My Mighty Princess surprised me both with both charm and comedy. I enjoyed also the scenes of marital arts. :)

Ki Nov 03 2008 3:47 am Jae-young Kwak's fourth film "My Mighty Princess" (following his ever popular directorial début "My Sassy Girl", tear-jerker "Classic," and "Windstruck") brings about an uneven amount of fun in a film that ultimately seems afflicted with Attention Deficit Disorder. "My Mighty Princess" actually finished production two years ago, but saw its delayed theatrical release in 2008. The move is an odd hodgepodge of various genre films from Asia. In a nutshell, Kwak took bits and pieces of Ryuhei Kitamura's "Azumi," Jin-gyu Cho's "My Wife is a Gangster," Stephen Chow's "Shaolin Soccer" and Ang Lee's "Crouching Tiger, Hidden Dragon" and rolled it together into a K-style Romantic-Comedy kimbap. With all these disparate influences the movie can please a large portion of film goers for some its runtime, but mesmerise only a select few of its film goers for all of its runtime.

One of the better decisions Kwak made for "My Mighty Princess" was casting Min-a Shin (a lady that probably owns the sexiest lips in Korea) in the leading role of So-hwi. Kwak does have an eye for casting future "super-star" actresses in his films, just reference Ji-hyun Jun (Gianna Jun) and Ye-jin Son as proof. While Min-a Shin won't win any major awards for her performance in "My Mighty Princess", she does bring about plenty of charm and makes the movie's many flaws more palatable. Between the two male leads, Ju-wan On definitely stole the limelight. For a lot of folks that have never seen Ju-wan On before check out his performance in the 2005 indie film "The Peter Pan Formula" for a taste of what he can do in a more demanding role. Geun-Yu, who played the love interest of Min-a Shin, was the weak link out of the three leads, able to provide eye-candy for the girls but otherwise coming across as a big stiff.

In "My Mighty Princess," So-hwi (Min-a Shin) eagerly begins college. She also isn't your normal teenage girl. Both of her parents came from a mythical lineage, possessing special powers and mastery of the martial arts. Her mother died at the hands of evil villains when So-hwi was a young child and since then her father has tried to raise So-hwi to continue the family's martial arts heritage. At an early age, So-hwi was often considered a child prodigy among her father's peers. Unfortunately for her father, So-hwi now wants nothing to do with the martial arts and just wants to fit in with the other teens at her school. She also wants to capture the attention of the school's ice hockey captain & motorcycle riding bad-boy Jun-mo (Geon Yu).

Meanwhile, her father hooks up with his martial arts friends "The 4 Masters" and laments the younger generations disinterest in the martial arts. One of his associates in The 4 Masters also has a son named Il-yeong (Ju-wan On), who was a former child prodigy like So-hwi, but now craves riding motorcycles more than practising the martial arts. Il-yeong and So-hwi were also close childhood friends. Because of this, So-hwi's father asks Il-yeong's father to bring him back home and persuade him to pursue the martial arts again.

Il-yeong does come back (So-hwi's father promised to buy him a Suzuki motorcycle in return) and tries to persuade So-hwi to come back into to the martial arts fold. Il-yeong doesn't make much headway, because So-hwi is so infatuated with Jun-mo. Meanwhile, Il-yeong has had a life long crush on So-hwi.

With that, you may expect the second half to continue more goofy moments between So-hwi, Il-yeong, and Jun-Mo, but if you do you'll be sorely disappointed. The movie throws out the first half's "super-human girl trying to fit in as a normal teenager" angle & the romantic love-triangle angle in favour of a pure martial arts film in the latter portions of the film. While production value is o.k. and you'll see a handful of entertaining wire action sequences, the martial arts angle has a decided half-baked, second rate feel to it.

Jae-young Kwak's "My Mighty Princess" comes out much better than his prior film "Windstruck," but fails to approach the likeability level found in "My Sassy Girl." The many episodic moments found in "My Mighty Princess" soon becomes a distraction, while the various film genres thrown into the film becomes a further distraction. This is problematic enough that you do come away with the feeling that the movie suffers from Attention Deficit Disorder. Is it a martial arts film? Is it a romantic-comedy? Is it a coming-of-age movie? Yes and no to each of those questions. There's also many unnecessary sub-plots that gets forgotten about as soon as they are introduced. None being more random than Jun-mo's infatuation with a much older female police officer. What was their past history? Answer - "who knows?" In any case, "My Might Princess" strongest suite is the appealing performances by Min-a Shin and Ju-wan On. There's also entertaining bits about the "abnormal teen wanting to fit in with her normal peers" and the love triangle angle between the three main leads. But, the movie loses whatever positives it has going for it with its pure martial arts film third act.