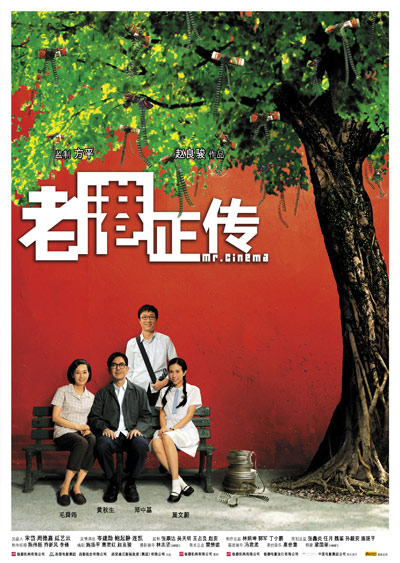 Kong (Starring Anthony Wong), who is labeled as a "leftist", has spent his lifetime at Silver Cinema. As the projectionist, every day he is responsible for the screening of Chinese films in Hong Kong, especially films produced by left wing companies, such as Great Wall, Feng Huang and Sun Luen.

Since 1960s, the three film production companies had produced many films that were among the most popular in Hong Kong. These films were the roots of many great stars and filmmakers, including the most charming actress Miranda Yang, Kung Fu icon Jet Li (whose debut feature film is "Shaolin Temple"), award winning director Johnnie To, elegant star Cherie Chung and many others. The films they produced had not only captured the glamour of the stars, but also the fascinating landscape of the Chinese Mainland.

In his early years, Kong always said to his wife (Starring Teresa Mo) and his friends that he loved China and his biggest wish was to visit his beautiful homeland. He had never imagined that, due to different obstacles, such a simple dream could not come true even after four decades. Today, when millions of Hong Kong citizens are traveling in and out of the Chinese Mainland on a daily basis, Kong still hasn't fulfilled his dream.

Kong, being a patriot, was regarded as a leftist after the riot in 1967. Since then, the "left" stigma became his mission as well as his curse. During the 1970s, when Hong Kong's economy was flourishing, he spent his time in labor union, going through some kind of Hong Kong version "cultural revolution". This made his life similar to a comedy full of black humor.

In 1980s, China had opened her door to the world. Unlike his father, Chong (Starring Ronald Cheng) hated to be a "leftist". His dream was simple - to make as much money as possible. To achieve this, Chong had decided to take up an adventurous journey to the Chinese Mainland. At the same time, Kong's wife Ying also tried to take advantage of the blooming property market, becoming one of the first generation "Opportunity Seeking Housewives" in Hong Kong.

When the 1990s came, Hong Kong was going to return to China. Cinema business was stepping into the downturn. Facing the cross road in life, Kong and his family were at a lost. With his wife and son leaving him, Kong witnessed the replacement of the Hong Kong flag by the national flag, preparing for the rainstorm on 1st July, 1997 all by himself. To his comfort, he still had the screen, his Arcadia. In the cinema, Kong could experience the laughters and the tears. It had also shown him that, all stories would always end in hope.