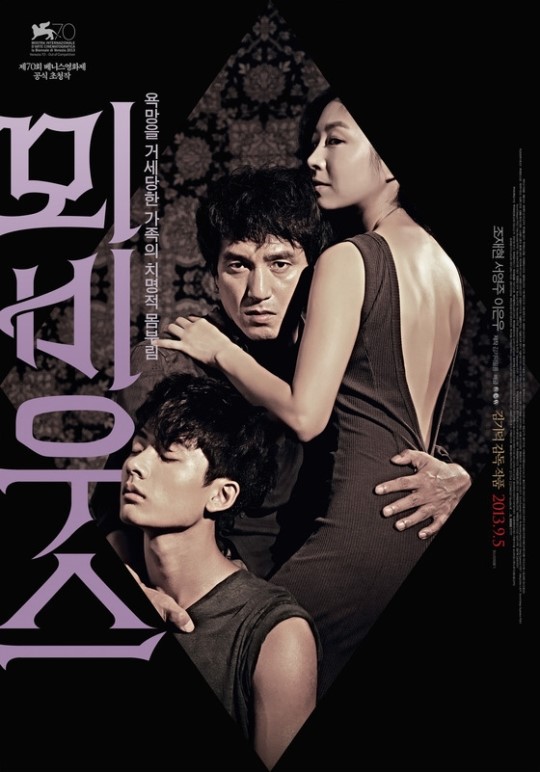 A housewife (Lee Na-Ra) becomes enraged with jealousy over her husband's (Cho Jae-Hyun) affair. Meanwhile, their son (Seo Young-Joo) sits in the periphery, observing their violent confrontations. One evening, the housewife takes a kitchen knife into their bedroom to exact revenge on the father. The father though is able to repel her attack and throws her out of the bedroom. The mother then goes into the son's room.

Delle Jan 29 2018 10:29 am This movie is the most disturbing movie i've ever watched, all the characters so f**ked up. While watching this movie, i kept thinking to stop but i found myself watched this movie till the end.

For me this movie more disturbing than human centipede. I cant say this movie is bad.

gmd24 Aug 10 2015 12:56 pm This film is not bad because it keeps me interested util the end . Kim Ki-Duk is really an amazing director because eventhough his films can cause a disgust to other people he keeps on experimenting and tackles subject like spirituality,lust incest,seuality in films in fact I like the way he makes the viewer get a reaction through his films and i think It is not about making money in films he is up to but getting a message which is relevant that we viewers will never realize if we dont watch his films.

A gloriously off-the-charts study in perversity featuring castration, rape and incest, Kim Ki-duk's "Moebius" is right inside the Korean king- of-hackitude's wheelhouse of outrageous cinema. A twisted companion piece to the fraught mother-son relationship in last year's "Pieta," Kim's latest ups the ante with arguably his most twisted nuclear family yet, a lust-and-guilt-ridden menage a quarter.

Just to prove what a daring formalist he is at heart, Kim has chosen to tell this story without a word of dialog, unless you count gasps of pain and pleasure, of which there are rather a lot throughout. This means the characters are never named, and the English-language press notes describe them only as Father (Cho Jae-Hun, reuniting with Kim after their legendary collaborations on "Address Unknown" and "Bad Guy"), Son (teen th esp Seo Young-ju) and Mother, played by Lee Eun-woo, who, in a bravura feat of transformation, also plays another key role as the father's younger mistress.

As the story starts, it's clear Mom has found out about Dad's affair and is taking it badly, judging by the way they come to blows when he takes a call from his lover, a store clerk who lives nearby. The son inertly ignores the fuss, seemingly more preoccupied with comic books and masturbation, like most teenage boys. One night, when the mother fails to get at the father with a knife, she takes out her rage on her own son by cutting his penis off, eats the severed member (recalling the mother's ingestion of her son's amputated toe in "Pieta"), and then runs off distraught and hysterical into the night.

Audiences who haven't walked out by this point in disgust (although surely no one goes to a Kim Ki-duk film without knowing what they might be in for) will be treated to an even more grueling second and third act, as the shame-stricken father investigates penis transplants on the Internet, and the son ends up taking part (after a fashion, given his castrated state) in a gang rape of the mistress. The boy later discovers — with Dad's guidance, no less — how to bring himself to climax through self-abrasion and knife gouging of other body parts. And then it gets even nuttier when Mom comes home for the last act, precipitating a chain of events that make sense of the pic's titular chiral object.

Many will of course be offended by the film's very premise, and that's surely Kim's intention; always been a vicious satirist of bourgeois values, he's almost never knowingly passed up a chance to dollop a little misogynistic sadism somewhere into the plot, like the spicy kimchi no Korean meal would be complete without. And like Lars Von Trier, whose "Antichrist" the film sort of evokes, Kim is something of a professional provocateur, which doesn't cancel out the fact that he's quite serious about exploring extreme emotional states.

There's no doubt the film is meant to be funny, an extreme black comedy, and neither is there any doubt that he also wants us to feel for these poor, broken, bullshit-crazy people. They're ridiculous, but they're also somehow believable, even relatable, mostly thanks to the cast's extraordinary skills at emoting wordlessly. The decision to eschew dialog seems perverse at first, but by degrees it makes sense, creating a primal quality that harks back to ancient forms of theater, even without the intended echoes of "Oedipus Rex." Any film-studies academics out there who still like to write about notions such as the phallus as defined by Lacan and other theoreticians fashionable in the 1980s will have a field day with this one. 8/10

Jason Apr 19 2014 8:13 pm DO NOT WATCH. I love Kim Kiduk and I used to think every movie he touched was perfect, but I was wrong. This movie is wrong. It's right up there with A Serbian Film and Human Centipede. I know you might be curious, but it's a film better left ignored.

val Oct 28 2013 8:24 pm I just watched this film and it was INTENSE and pretty disturbing. But a great film overall. This is definitely for age 18+. I can't believe they used a 15-year-old for this role XD You can watch it on dailymotion (eng sub, but there's not 1 line of dialogue in the movie so it doesn't really matter) under the user John Rules.

zelle Aug 23 2013 2:29 pm I really look forward to this film. But the question is will full version be available later.