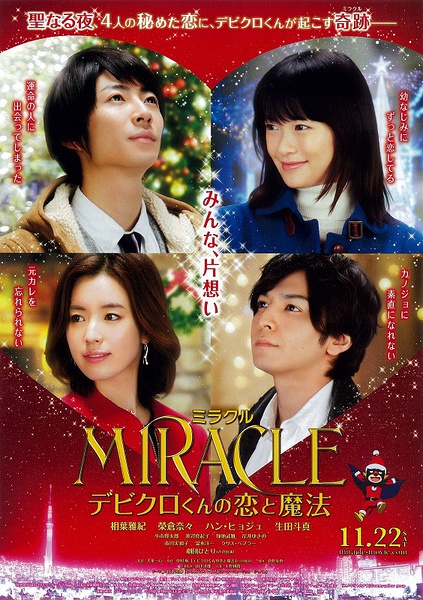 Hikari (Masaki Aiba) works at a book store. He is a kind person, but his kindness often makes him look pathetic. Hikari hopes to become a manga writer. At night he spreads mysterious flyers "Debikuro Communication". One day, he meets someone via fate.

Anna (Nana Eikura) has been Hikari’s friend since they were children. So-Young (Han Hyo-Joo), who is a world famous lighting designer, happens to know Hikari. Kitayama (Toma Ikuta) graduated from the same university as Hikari. Kitayama is also a popular manga writer.

The love lives of these four people makes a miracle at Christmas night.

Yuzuruu Oct 28 2014 8:35 am Can't wait to see Toma and Hyo Joo pairing!! I hope their charas (kitayama n so yeon) will be together in the end of movie.. And i wish TomaJoo are dating off screen heheee coz TomaJoo have many personality+experience similarities :3 TomaJoo Hwaitiiing~

Yuzuruu Oct 28 2014 8:30 am Can't wait to see Toma and Hyo Joo pairing!! I hope their characters (kitayama n so yeon) be together in the end of movie.. And i wish TomaJoo are dating off screen heheee coz TomaJoo have many personality+experience similarities :3 TomaJoo Hwaitiiing~

Dramacraved1080 Aug 04 2014 4:35 am Great to see Han Hyo Joo and Ikuta Toma in the movie together. I hope it will be a good story for the coming Christmas season :) Sugoiiiiii

Lorchenne Apr 14 2014 6:36 am I can't wait to watch Aiba and Toma in this! They got two Johnnies in one film, this is gonna be huge! And it's been long since Aiba was in a film, he's so under-appreciated.

Naja Jan 19 2014 1:33 am I can't wait for this to come out. I LOOOOOOVE Aiba-kun, especially with his awesome work like in mikeneko holmes no suri and my girl. I ALSO LOVE Toma-kun because of his amazing acting in Brain man and Maou. I'm really excited to see how this will turn out!!!!!

lala Jan 18 2014 6:08 am hyo jooa ilove you very very much please show us your talent acting in drama like filming