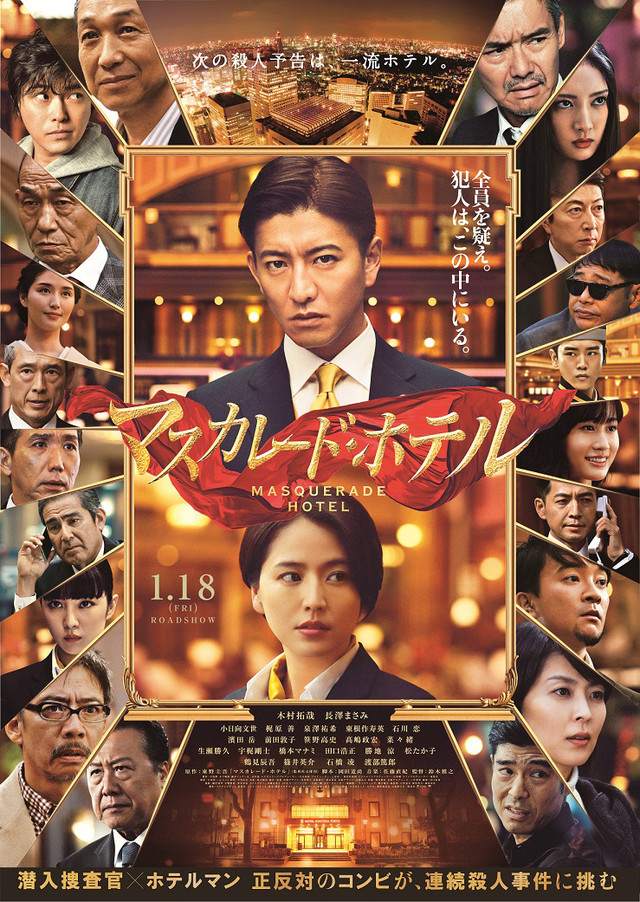 Three murder cases take place in Tokyo. Numbers are left at the murder scenes, possibly hinting at where the next murder will take place. An investigation begins of the serial killer and Detective Kosuke Nitta (Takuya Kimura) works on the case. He believes the next murder will take place at Hotel Cortesia Tokyo. To catch the killer, Kosuke Nitta goes undercover and begins working at the front desk of the hotel.

Naomi Yamagishi (Masami Nagasawa) works at the front desk of Hotel Cortesia Tokyo. She is selected to train Kosuke Nitta for his front desk job, but they can't get along. Kosuke Nitta is focused on catching the killer, but Naomi Yamagishi prioritizes the safety of the guests. As they begin to understand each others differences, they also begin to build a trust between each other. Who is the murderer?

The game is afoot at the Hotel Cortesia Tokyo but we are talking Bally shoes or Gucci loafers at $1,000 a pop --- some serious mystery game this!

Fast paced, clever and complex script; if you blink you may miss something crucial!

Everyone is in a mask, a masquerade ---- but the ace detective, Nitta (Kimura), is rocking the case away!

All is revealed at the half–way mark of this movie, which only complicates the plot further!

Hellaciously good with a great cast!

(Based upon suspense mystery writer Keigo Hagashino's book: Keigo Higashino takes the seemingly mundane and banal, does a shake-and-bake with twists and turns and arrives with High Mystery!)

Axel Joe Qoepunk Dec 31 2019 8:07 am Remind the past. Takuya Kimura & Takako Matsu, the couple I admire the most. Good movie. Unfortunately it does not become a serial like Hero. Never get bored watching all the Takuya Kimura films.

Yana Dec 02 2019 5:51 am Does anyone knows where the shooting location took the place? I mean the hotel?

Aonyma Sep 20 2019 10:20 pm This should have been a series! The story line is great. I thought it's another cliche movie about undercover but I was taken away by the chemistry between the two leads and the hotel environment. It made me want to quit my office job and get a job in a hotel business. And many characters were not highlighted despite them being great being pkayed by great actors. The movie is a bit lengthy but I enjoyed it very much.

Wayer May 26 2018 11:58 am I'm crazy about the writer. His books are addictive. And now they are taking in KimuTaku as the lead... whatttt? I am so cannot wait for the movie to come out! Yayy!

SAYURI KONDO May 13 2018 10:41 am The collaboration of Mr.Takuya Kimura and Director Suzuki is always the best! I want to see it as soon as possible!

Karen Khoo Oct 13 2017 9:29 am So happy to see another Keigo Higashino novel adapted into a movie! I'm a big fan of the author! He really writes amazing books. AND ALSO THE CASTS LOVE BOTH OF THEM!

122am Oct 11 2017 11:41 pm I'm so happy that Takuya Kimura split from SMAP. He will make more movies which benefit international fans like myself. My hope is he will take more demanding roles that differ from his "idol" image. I want his filmography to be varied like Satoshi Tsumabuki. I watched "Kazoku no kitachi" (led by Shingo) and "A Life". I preferred "Kazoku". Can Captain take on slice of life shows? It will be a better and refreshing change.