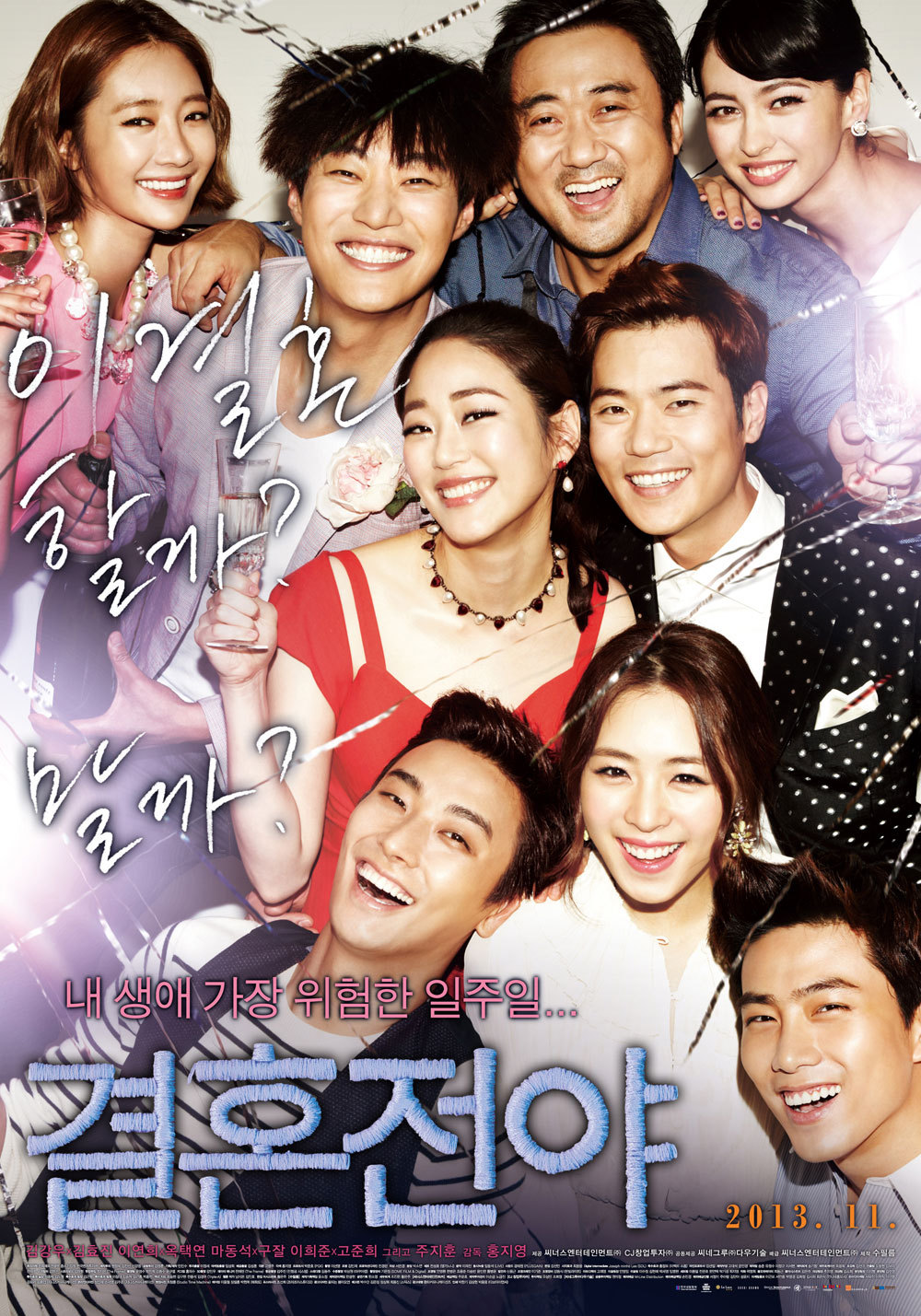 "Marriage Blue" follows four couples as they prepare for their weddings.

Tae-Kyu (Kim Kang-Woo) is a former professional baseball player and now a coach for a minor league team. His girlfriend Joo-Young (Kim Hyo-Jin) runs a successful urology clinic. They seem happy and are set to get married soon. Tae-Kyu then learns that Joo-Young is a divorcee. Tae-Kyu feels betrayed and also jealousy.

So-Mi (Lee Yeon-Hee) is a nail artist. Her fiancé is Chef Won-Cheol (TaecYeon). They have been together for 7 years and their wedding date is fast approaching. So-Mi though feels something missing in her life. She wants to feel pure love, but Won-Cheol thinks of their marriage more of as a living arrangement. Several days prior to their wedding, So-Mi travels to Jeju Island for a nail art competition. There, she meets tour guide and webcomic writer (Joo Ji-Hoon).

Gun-Ho (Ma Dong-Seok) runs a flower shop and is about to marry Vika (Guzal Tursunova) who hails from Uzbekistan. Suddenly, Gun-Ho is afflicted with impotency. Gun-Ho goes to see urologist Joo-Young. She tells him that there is nothing wrong with him physically and his impotency is caused by stress. Vika is younger than him and very beautiful. Gun-Ho begins to wonder if Vika is only marrying him to attain Korean citizenship.

Dae-Bok (Lee Hee-Joon) works for Joo-Young at her urology clinic. He is dating wedding planner Yi-Ra (Koh Joon-Hee). One day, during a baseball game, Yi-Ra tells him that she is pregnant. Dae-Bok immediately proposes. While they prepare for their wedding, they begin to argue a lot. Yi-Ra doesn't seem happy and Dae-Bok wants to know why. 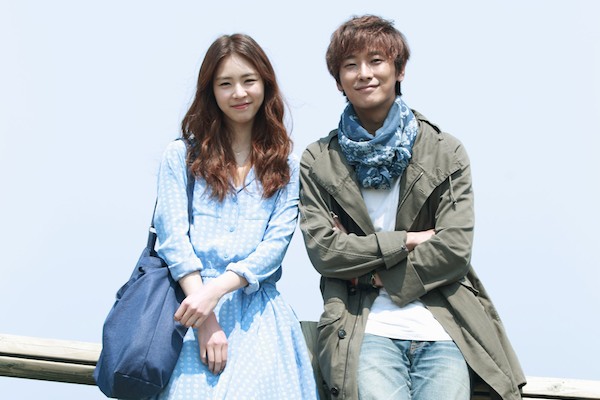 Kim Na Na Apr 09 2020 3:05 pm Kinda refreshing to watch after a few new movies of JJH where he often played the bad guy. But to some comments saying how So Mi threw away 7 years. Yes, 7 years are long, but sometimes you have to ask 7 years of quality or quantity? Plus if Won-Cheol really loved her, he would not easily accept the break-up.

Wow, I know it's a fiction but how could the writer create the scums like So Mi and Tae Kyu. Story of So Mi is at least somewhat believable, spending time with a stranger because you are unsure of your partner is believable. Coming back to your boyfriend and sleeping with him on the same day, was a bitch move though. Felt bad for Won Cheol, poor guy didn't do anything wrong to deserve that, but it's better to find someone a girl than So Mi. But damn Tae Kyu is such an a**hole, getting jealous for no reason, impatient, short tempered, philanderer (in the past). It'd have been great if Joo Young had left him. Loved the story of Gun Ho and Vika. Dong Seok can be any character he wants! It was frustrating to watch Dae Bok and Yi Ra, both of them refusing to communicate with each other. Letting their parents meddle in their personal life. I think Korea has a big case of "helicopter parents". Parents interfere in their kids life and it reflects in KDramas and movies.

There were pars where I was frustrated, but all in all not a bad movie.

Efiram Oct 12 2017 5:21 am I watched this because I like taecyeon so much but I'm disapponted because this movie was very boring. I also don't like the story of throwing away 7 years relationship to a guy who you just met along the way. It' s rediculous! Poor my taecyeon!

The couples are okay except how somi ends up with kyungsoo. It's so annoying the fact that somi can't be loyal to someone that has been with her for 7 f years and goes for that guy she just knew for 2 days and made out with him ugh that seems ridiculous and gross. She even doesn't deserve a really nice guy like Woncheol.

toma May 31 2015 4:25 pm Spoiler~~ I liked the movie, all the couples except so mi and kyung soo ,, the way somi and won cheol break up that easy in their wedding day after 7 years in relationship,,and they were very cool about it is just so silly,,yea it's a movie and so, but it irritates me that they took relationships that easy,,anyway the movie as all is nice

Ki Dec 03 2013 11:31 am @xxxzxxx you can reach me at twitter @kidmun, I would leave my email address here, but rather not get spammed by robots etc.

malika Dec 01 2013 3:28 am Really want to watch this movie, especially ju ji hoon part. Love him in naked kitchen movie but did'nt like the ending of that movie, not clear for me. I hope in this movie, his relationship with lee yeon hee character clear so doesn't make us as viewers confuse. Who is lee yeon hee choose? Ju ji hoon or Taec Yeon? Huaaaaa...

xxxzxxx Nov 28 2013 4:38 am @Ki. Thanks for the info. I'm wondering if there is any way I can contact you without going through this comment section since I do not wish to spoil the movie for anyone else.?

xxxzxxx Nov 27 2013 11:22 am @Ki. The relationship between Ju Ji-Hoon and Lee Yeon-Hee is not like the relationship in The Naked Kitchen is it? In that movie the female lead came off as a very selfish person and I def. didn't like the ending of that movie. The writer is the same so I'm wondering if the feelings are the same in this movie compared to The Naked Kitchen.

Ki Nov 27 2013 3:31 am Two thumbs up for "Marriage Blue". I came away pleasantly surprised with the film. I really enjoyed the Ju Ji-Hoon + Lee Yeon-Hee relationship and the Ma Dong-Seok + Guzal Tursunova relationship. The other two seemed more like filler, but performances all around were good and the four people mentioned above really brought something special to their stories. Would gladly watch this movie again.

P.S. I wonder if there was a subtle nod to movie "Architecture 101". The story between Ju Ji-Hoon and Lee Yeon-Hee is set in Jeju (like parts of "Architecture 101") and then back in Seoul, Lee Yeon-Hee's house looks just like the house where Bae Suzy and Lee Je-Hoon spent time together in.

Shymoon Oct 31 2013 11:58 am I think it will be a lot of fun but probably far from a movie to profound questions. Eager to see one more Ji Hoon performance. Will he be his role a man absurdly charming and seductive who appears to disrupt the wedding of someone again? Well, who does not lose head by someone with a smile so bewitching? OMG, November is the month of my wedding anniversary. If I go to a gallery and sneak there may be some chance of bumping him behind some fencing? No, too good to happens to an invisible woman like me.

JJP Jul 16 2013 11:57 am I like to watch movies directed by a female director. But this seems like dull romantic plots again :( And they casted boring young actresses to pair them with older handsome actors? How original... I hope she managed to offer a different gaze on this but I honestly wouldn't bother if it wasn't for the eye candies.

mrm May 08 2013 4:53 am This movie seems interesting! The actors and the actresses.. i've watched some of their drama, mm .. Kim Kang Woo on Lovers of Haeundae, Kim Hyo Jin on Marry me Marry, Joo Ji Hoon on Goong, Lee Yeon Hee on Paradise Ranch, Taecyeon on Dream High, Guzal on Rooftop Prince, and Go Jun Hee on Can You Hear My Heart.. Woaaah! I love them from their previous drama! ^^