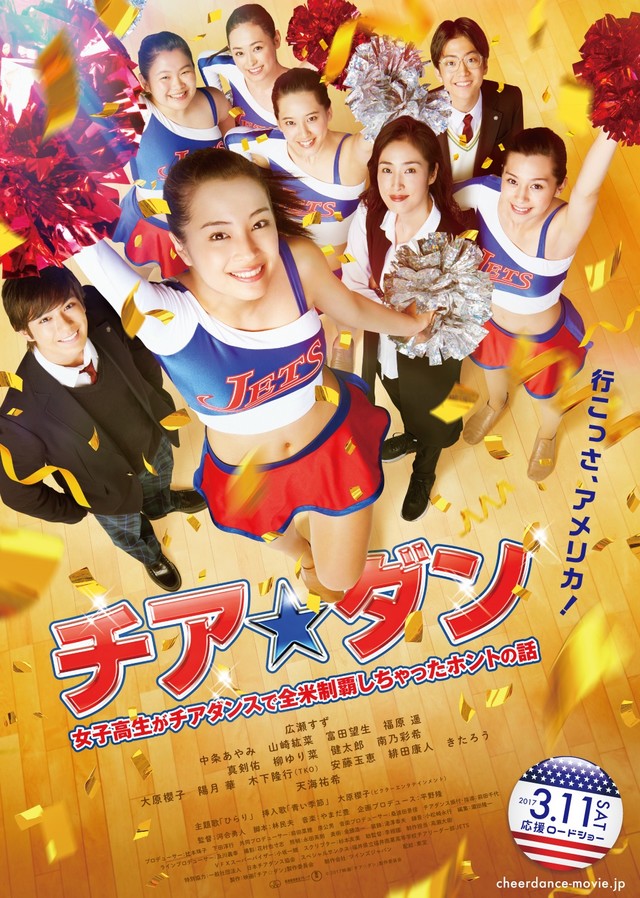 Hikari Tomonaga (Suzu Hirose) joins the cheerdance club at Fukui Chuo High School. She joins the club to impress Kosuke Yamashita (Mackenyu), whom she has known since junior high. The club itself was recently converted from a baton twirling club.

At the cheerdance club, Hikari Tomonaga meets Ayano Tamaki (Ayami Nakajo), Yui Kito (Hirona Yamazaki) and others. The girls enjoy dancing together as a unit, but they must endure their ultra-strict instructor Kaoruko Saotome (Yuki Amami) and her rules. Kaoruko Saotome announces that they will compete at the USA Cheerdance Championship.

Miyumi Jul 24 2022 4:20 am Recently finished, it's true they shoot in America. Ayami in real is suitable to be cabin attendant as the end credit show. There's a view that can only seen if your on top position, aim for it. There's a two love story but show less.

SpongeBob May 07 2020 2:13 pm Suzu was amazing as always . The actress who played their teacher has my all heart..and last but not the least ..macken???????❤❤❤it doesn't matter to me how small role he plays in any project he gives his all...just his smile makes me go Woohoo?❤ I just want him to get more screentime and lead roles❤

kwyte Jun 01 2019 1:33 am Suzu is actually prettier without bangs. Also suzu and mckenyu are so cute together...I always ships them since chihayafuru

Yuuta Jul 17 2018 7:57 pm First film where Suzu is attractive. I guess she is improving with age. Also surprised at the cute body of Ayami Nakajo. I had never seen her before. She seems cool too.

Phaserface Apr 23 2018 7:22 pm I thought this was a movie about the jets football team, they've been using the motto " lets go jets " for decades

Valerian Jan 18 2018 11:35 am The song that they are dancing to on the street is "The world seem so bright ~ beautiful days" by Naruya Ihashi. You are welcome!

mika Jan 06 2018 1:42 am definitely get bring it on vibes just from reading the description. But I have a good feeling about this. There is chihayafuru vibes in it too. It's so cool that they went to San Diego to film this!

ufikus Oct 12 2017 9:24 pm Yuki Amami returns for Cheerleading again! Fantastic. I am still proudly remembering her cheerleading movie Tengoku e no Ouenka Cheers, otherwise translated as Cheers Heaven. And in this is Chihaya. Must watch it immediately.

Ki Jun 30 2017 5:41 pm I watched this on a flight from Seoul to Dallas and enjoyed the movie way more than expected. Some of the drama placed into the script seemed a bit forced, but otherwise the film was fun and entertaining throughout and a big shoutout to Suzu Hirose for a wonderful performance. Most enjoyable Japanese commercial film I have seen since "Flying Colors."

Sam Jun 23 2017 3:47 am chihaya and arata together!! guess i should watch it! they didn't have much screen time together in chihayafuru..so hoping to see more of my OTP!! <3

Yue Jun 09 2017 9:00 am Bloody hell, I looked them up (the real team) after I watched the movie, the won the NDA National Championship 4 years (Not sure about the All-Japan Championship) in a row since 2013 (well, if my maths is correct there) and five times (first win like the wiki said in 2009) since their formation 10 years ago. Like... Are these people even real? The movie itself was already inspiring and I can understand why they'd make a movie based on the girls, they're amazing!

asheechiroku Oct 01 2016 8:23 am can't wait to watch this movie! I do hope there will be an English subtitle right away