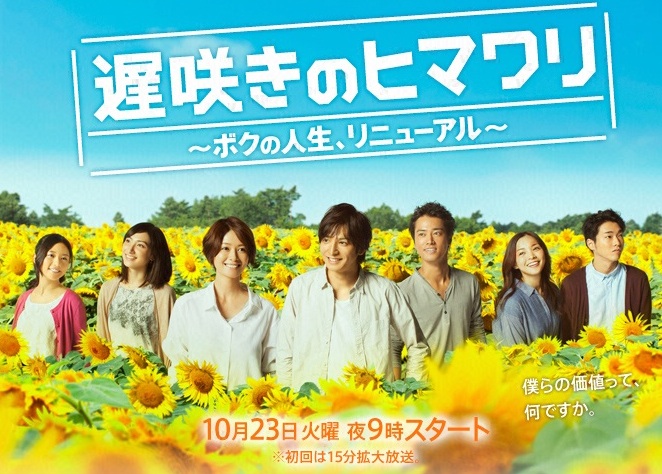 Set along the Shimanto River in Kochi Prefecture, Japan. "Osozaki no Himawari" depicts the lives of seven people who follow vague dreams, but live an ordinary life.

Jotaro Kodaira (Toma Ikuta) is about to turn 30-years-old. Jotaro has recently been laid off from work and around the same time his girlfriend of seven years dumps him. Jotaro then spots a website recruiting people for work in Koichi Prefecture in a regional revival cooperation.

Kahori Nikaido (Yoko Maki) is clinician sent to work in her hometown of Koichi Prefecture. On the way to there, Kahori meets Jotaro Kodaira.

Jun Noriko Jan 18 2013 4:07 am Kashii Yu was really beautiful in this movie..I wish she had end up with Ikuta Toma in the end but well, that didn't happen :p

I love it. It makes me feel warm and fuzzy inside...

He become a lead role on his birthday, this would be great!

Really excited for this one. October.. Please come faster! >///<

Nameless Passerby Sep 22 2012 6:11 pm One of my favorite j-actresses Kashii Yu starring in a drama with my favorite J-actor Toma Ikuta?!?!?!?!?! Soooooooooooooooo excited!!!!!! I wish we had a description of Kashii Yu's character too.