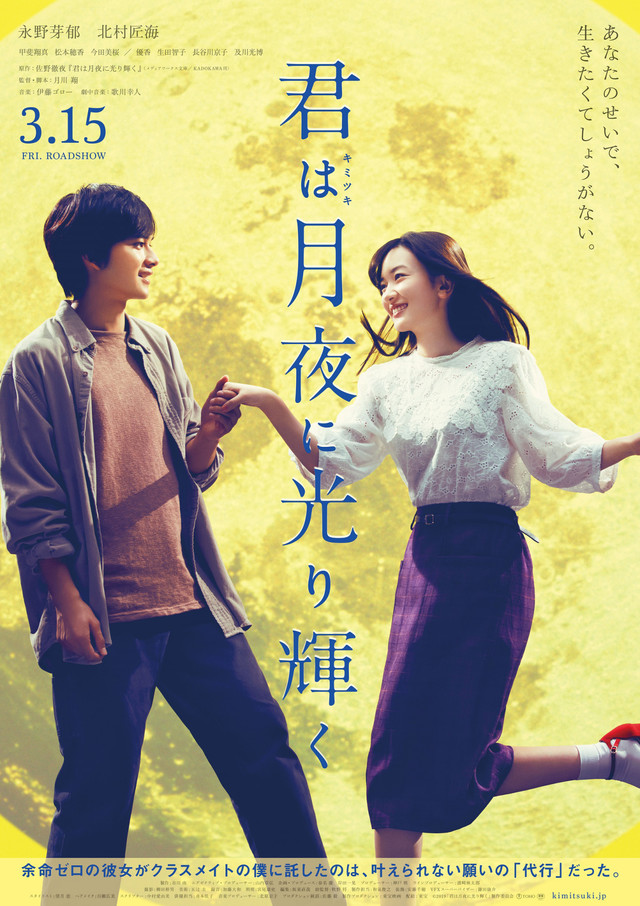 Takuya Okada (Takumi Kitamura) is a high school student. He visits his classmate Mamizu Watarase (Mei Nagano) in the hospital. Mamizu Watarase suffers from the mysterious ailment “Luminescence disease.” People who have the disease show a faint sparkle under the moonlight and the sparkle gets brighter as their death gets closer. Mamizu Watarase is not allowed out of the hospital and she will not live long enough to become an adult. Takuya Okada offers to help her carry out her wishes before she passes away. He also tells her how he feels about her, but Mamizu Watarase’s death is approaching.

April Dec 10 2020 8:26 pm Sad! I knew it would be sad but DANG... The beginning, as most Japanese movies are in my opinion, was slow in terms or story but also face past in terms of relationship building between the main characters. Past that though, the storyline is great, the acting is not too much or too little, and emotions are GREAT. Honestly, I think this movie is one of the better takes on this cliche one person dies trope. 9.5/10 if you're thinking about whether to watch it or not, you definitely should :)

Wonder Feb 04 2019 10:43 pm .. why is japanese love to make movies with tragic themes, like boy/ girl will die, only few months to live.. i have count so many japanese films with this theme.. and oh my god, the diseases, keeps getting weird.. i cant.. lol

Lala Oct 24 2018 2:43 am That plot got thinking it's like a combination of A Walk to Remember and Midnight Sun. =D will watch it for sure cos i'm a Takumi fan!

Xiu tempo Oct 17 2018 9:23 pm Can takumi plays in a movie without someone being terminally ill? Pankreas, live and lies and now this?? Dang