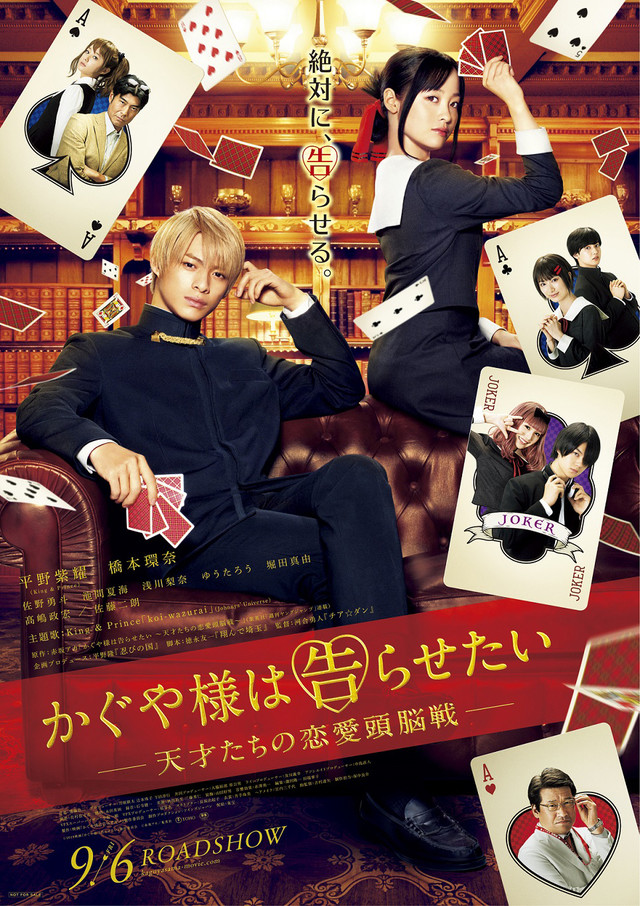 A prestigious private high school has students who rank academically at the top of the nation. The school's student council president is Miyuki Shirogane (Sho Hirano) and their student council vice-president is Kaguya Shinomiya (Kanna Hashimoto). They are attracted to each other, but do not confess their feelings for each other due to their stubborn pride. About a half a year has passed since they have kept their feelings private. Now, Miyuki Shirogane and Kaguya Shinomiya think the person who confesses first will be the loser. They both think of ways to make the other person confess first.

minu Jan 28 2021 10:10 pm wait, i didn't know that sho hirano is a member from King & Prince? i just noticed when i watched MV "I Promise" short ver....the face look familiar so i quickly search this movie and see the cast list.

btw, i just know the idol group roughly. seems like i'm gonna stan and hear all of their song?

Yamki Apr 29 2020 1:29 am Chika Fujiwara is played really well by actress Nana Asakawa. I had so many laughs while watching this movie. The lead actors have chemistry and they have played manga-based characters in the past too. So rest assured, you will really see Shirogane and Kaguya here :)

jon Nov 03 2019 6:24 am wait is this being narrated by sawashiro miyuki??? this voice is definitely hers

Pagoli Jul 20 2019 1:15 pm wuoohh tsundere couple in live action.... I don't expect too much but keep looking forward to this movie

Asari Ayana May 13 2019 12:31 am Everyone is waiting for Fujiwara Chika's role. Since Ishigami Yu's role is out and will play by MiLK's Sano Hayato. I think Chika's role is a bit difficult to be act.

I Just Want to Comment Apr 10 2019 8:55 pm There's no Fujiwara Chika or Yu Ishigami? They were the ones controlling the mood of the Comedy. I doubt this live action will be successful without them.

Amy Feb 21 2019 2:39 am I really can’t wait for this live action... I know how good Hashimoto Kanna is but I can’t say the same for Hirano Sho. I’ve watched every drama and movie he starred in but for me, he’s just so-so.. well, maybe in this drama he will bring out the best of him.. I’m all for waiting this drama...