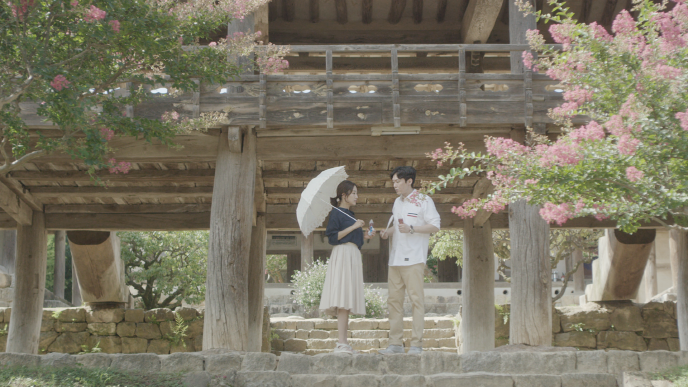 Jin-Woo (Park Byung-Eun) lives an ordinary life after he gave up on his dream of becoming a novelist. One day, he receives news that his senior who graduated from the same university passed away. He goes to the city of Andong and meets Mi-Jin (Jeon Hye-Bin). She works at a noodle shop there. Hiding the fact that he is married, he visits the noodle shop often. They walk around Andong and talk about a novel.

EnzoA Feb 02 2018 9:27 am A disappointing, irksome and worthless drama. Authors should keep in mind that to write a romance story you must know the topic first. This is obviously not the case. The male lead character is really embarrassing, beside being an humongous idiot, and Park Byung-Eun's subpar acting doesn't help for sure. Jeon Hye-Bin is easily the best thing of the drama, stunning and graceful as ever, but she can't manage to save it. Luckily, the ending does justice to her. Absolutely not recommended. ?

Bob May 06 2017 12:21 pm This is one of those dramas that you really need to sit down and watch closely. It's slow moving but each scene is important to the story. While the some of the ending is not fully explained, it is a very good drama and does a good job of providing a "teaching moment" for the viewers. I thought that Joen Hye-Bin was magical in her performance. She was not over the top, she played this role very gracefully. I have been a growing fan of hers for a few years now. She showed her skills here in this role. Worth the watch for sure, but make sure that you are able to focus on this... maybe a quiet rainy day or quiet evening alone.

maryyayay Mar 01 2017 8:49 pm im back here,. drama special,. just 60 mins length drama, im getting bored nowadays to long dramas, i dont know why,.. omo,. i love kdrama special because of lessons you get every drama,.

nambong Nov 15 2016 1:04 am This reminds me of My Sassy Girl! (read: the girl's name isn't known). Even though its slow paced as most of it is set in the countryside, the conflict and resolution are well brought across- the unravelling and meeting of the 2 characters makes it such an interesting watch. The shots are really good too! I loved the dam overflowing scene which portrayed her emotions well. Overall, it is a beautiful short film, capturing the emotions of the 2 characters well.