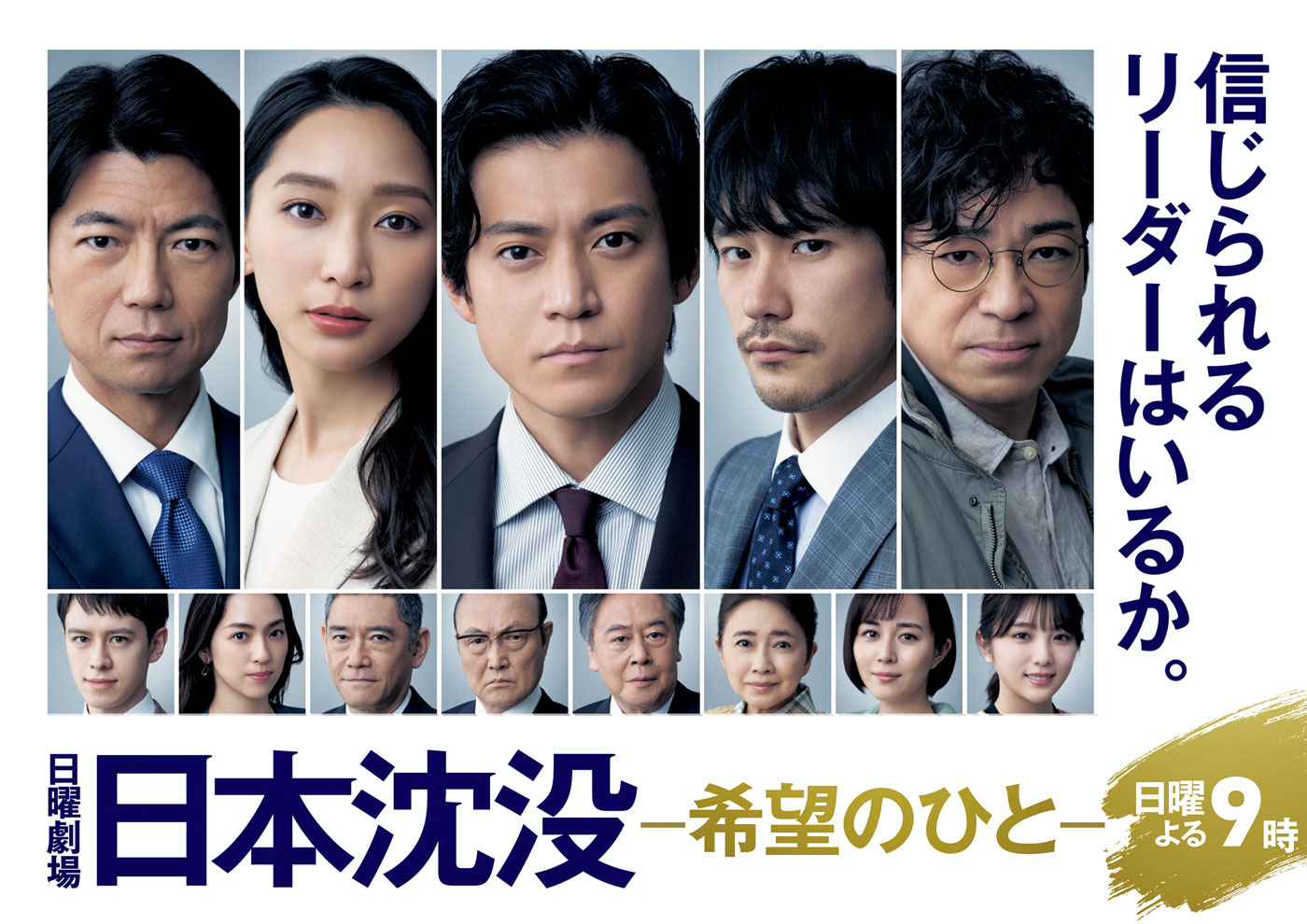 In 2023 in Tokyo, Prime Minister Eiichi Higashiyama (Toru Nakamura) pushes for COMS at the World Environment Conference. COMS is a method to liquify pollutants and store it in the crack of the sea floor. Prime Minister Eiichi Higashiyama gathers young and talented bureaucrats and launches Japan Future Promotion Conference, which is to benefit the future of Japan. Keishi Amami (Shun Oguri) of the Ministry of the Environment and Koichi Tokiwa (Kenichi Matsuyama) of the Ministry of Economy, Trade, and Industry are members of that conference.

One day, Yusuke Tadokoro’s (Teruyuki Kagawa) article is published in a weekly magazine. His articles warns that Kanto region will sink into the sea. Due to his article, groups begin to hold protests. To ease the situation, Keishi Amami meets with Yusuke Tadokoro, but Yusuke Tadokoro insists that in the near future, Izu Peninsula will sink and that will portend the Kanto region sinking. Around this time, Minori Shiina (Anne Watanabe), who is a weekly magazine reporter, talks to Keishi Amami about possible corruption between a company and the Ministry of Environment. Keishi Amami is uncomfortable dealing with everything, but he takes part in his hobby and goes scuba diving with Koichi Tokiwa. There he faces a shocking event.

I think for the first episode, I stare a lot of time at kenichi bcos I felt like I know him and then I googled it, he's actually L from death note ಠ_ಠ

how can i..... Forgot L's Face From Death Note anyway, amazing drama :) I keep on crying in some parts because it's just felt so real :"(

Tune Nix Feb 04 2022 9:12 am I saw the 1973 Japan Sinks movie played on tv a long time ago. I remember that everywhere the protagonist went the earth shook and buildings fell so I thought he was just cursed. In this current version, there were only two major events but still there's a lot of action. They managed to build up the suspense in every episode. Plot wise, it gets a bit stale though that the protagonist solves every problem that comes up every episode. The virus part was an overkill since, like, "Yes we know, COVID, you just have to throw that in there." Also, I don't get why they had to give away the companies. They could just relocate headquarters and host country will benefit from taxes. There were great performances too. Of course, Oguri Shun, how much his English improved since Yume wo Kanaeru Zo. Renji Ishibashi was perfectly hateful. Weird details I noticed: (1) how quickly the reporter traveled to the US, got the job done, then back home again, (2) how they come up with an idea and instantly have a video presentation of it, (3) how the drone found which window the PM was standing behind, (4) how noticeable Shun's red wine tie was - must be very expensive.

Janice Vu Jan 21 2022 8:16 pm I have just finished watching Japan Sinks - People of Hope drama. I loved the suspense and the drama. The actors were all believable and I was caught up in the storyline. Highly recommended with 5/5 stars.

Nobu Dec 21 2021 6:32 pm The acting for me is 8/10. However, when it comes to the geological disaster my score is 3/10. Why? This series lacks the geologic activity even though this is a fictional exaggerated disaster films.

An island, attached to a continental plate though rapidly sinking needs a lot of geological activity while it is rapidly sinking into the ocean. The only volcanic eruption I saw is at the end of the series. Japan is layered with so many volcanoes. As the plate moves, there should be volcanic activity and seismic activity. All I saw is one great earthquake and a puff of volcanic eruption at the end and it just sinks like a sinking boat.

For me, the sinking process is superficial. The best for me is the movie Sinking of Japan.

Overall my score for this series is 5/10.

Mago Dec 15 2021 3:39 am We can see how gov handle crisis with a lot of variables to consider. If japan actually sinks, at least they already have a plan like this to implement. Superb Drama

Supeeeer Dec 14 2021 6:02 pm This by far the best series i've watched for 2021 line up. So many messages given, not only about environmental problem, but also how the gov should've approached it's citizens, business, other parties, and etc. In here we also learnt how important it is to be prepared. As a person who lives in geographically-fine location, i feel so grateful. I respect the hustle that japan has endured mad respect.

I highly recommend this drama if you want a good story line without actors and actresses who’re selected to only look good on the screen.

Just finished first 2 episodes - the quality of the episodes (directing, music, acting etc.) is so solid - at a JP top movies standard that I nearly think that this is one of those standalone TV specials.