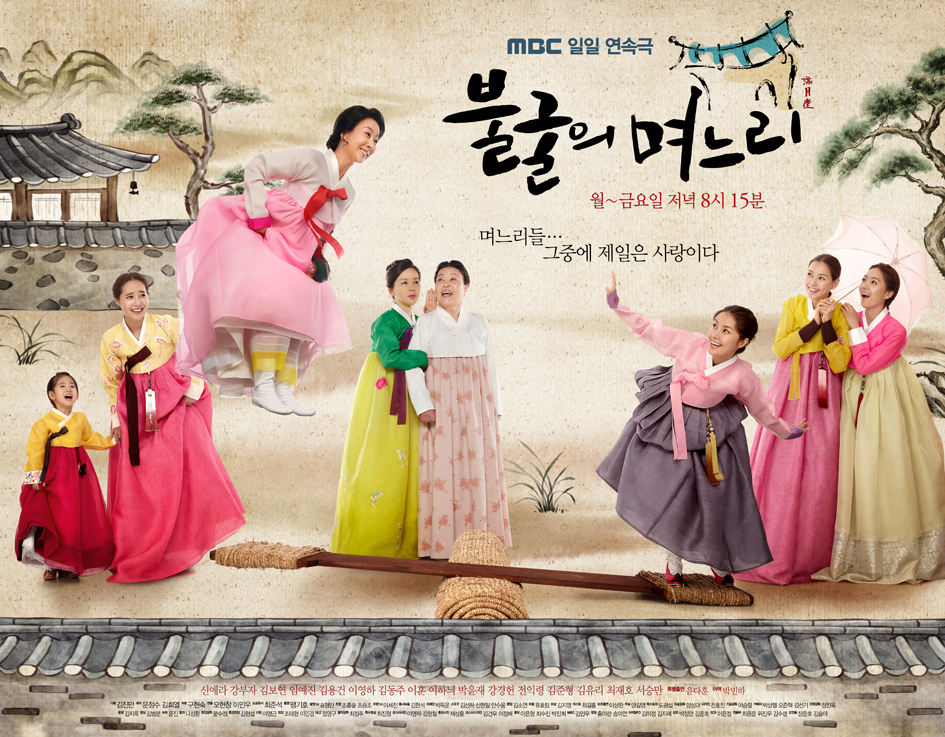 For over 300 years house, three generations of a family live in the same home. They have their own stories.

The daughter-in-law of the 11th generation, Choi Mak-Nyeo (Kang Bu-Ja), leads her family with charisma. She is strict, stubborn and also childish. Before she was even 20-years-old, her husband died. Since that time she taken care of her family and family matters.

The daughter-in-law of the 12th generation, Cha Hye-Ja (Kim Bo-Yeon), also lost her husband when she was still young. she thought her fate to be the first daughter-in-law of this family. she is busy to manage family matters. her first lover suddenly shows up in front of her.

The daughter-in-law of the 13th generation, Oh Young-Shim (Shin Ae-Ra) is a positive and bright woman. She was adored by her in-laws, but for the past 10 years of her marriage they have not had any children. Because of this, Young-Shim has a hard time. To make matters worse, her husband has an affair and demand a divorce. Finally, her husband dies in a car accident. Young-Shim feels guilty over not bearing any children.

I bought the original DVD from a DVD shop but there were problems getting the discs to play. They got jammed and I can't get past Episode 54. I tried for more than a week trying to play the DVD but to no avail. I m sorely disappointed that I can't enjoy the rest of the Drama.

sgt_doom Dec 03 2018 2:07 pm Mixed opinions on this: many strong points, some weak ones: really interesting --- or insidious --- karmic theater (nothing against karma, but not quite complete in this series); a character steals something years ago which serves as the basis the family or chaebol fortune, and the victim's daughters-in-law, wronged by the victim's sons, eventually benefit by way of marriage into the perpetrator's now-rich family; but the victim never appears to gain any karmic retribution, while the perpetrator appears to escape punishment?!?!?!

Eugene Jul 03 2014 3:28 am Just rewatched the show again. The more I watch this drama, the more I'm in love with it. Love Shin Ae Ra and Park Yoon Jae as a couple. One of the my favorite K-dramas.

Appreciate if drama series can be in included as one of your videos.

That's all folks! Have a good day!

Jiale May 24 2012 12:33 am We're going to miss it greatly! Mum & myself love this Korean drama so much. It has brought us to tears & also a lot a lot of laughter! Thank you so much. How I wish they could visit Singapore! We would love to meet them face-to-face! Esp...Kang Bu-Ja! Well done 99!

We love them all!

Hyun Myung-Joo is just so funny! Viviana is a darling. Choi Mak-Nyeo reminds us of filial-piety. Park Se-Ryeong & Im Ji-Eun remind us to turn over a new leaf. Moon Se-Jin is a typical father-figure at home. sous-chef is the "pathetic" guy. Likewise, Kim Geum-Sil, but at least she ended up re-uniting with her ex. Cha Hye-Ja is such a lovely mother. She makes us tear alot alot. Jang Suk-Nam is a real gentleman. Letting go for the betterment of all. Likewise, Bang Jin-Kook. So hard to decide to marry Kim Soon-Jung. Thus, Oh Young-Shim, also hard a hard time too... resisting Moon Shin-Woo! Love their acting! Oh Young-Shim really looks like "ah-jie", a Singapore actress! Moon Jin-Woo is also such a gentleman and lovely husband to Han Hye-Won. Likewise, Jang Bi to Kim Yeon-Jung. I guess I've covered all. Bravo!

Thank you for the Korean Drama! More Please! =)

jen solomon Apr 15 2012 8:40 pm i still dont understand, why xinmsn dont have the catchup of iron daughters-in-law i missed out as i alwiz came back fr work, late..

veron Apr 08 2012 3:04 am my favourite show but use to miss on channel U and only can log to korean digalogue n dont understand

Epin Mar 08 2012 12:50 am The film is very good, me and my family loved it. All the great artists in acting roles. Then, I also really like Viviana, expect to have a child like her. Wait again for the next good film.