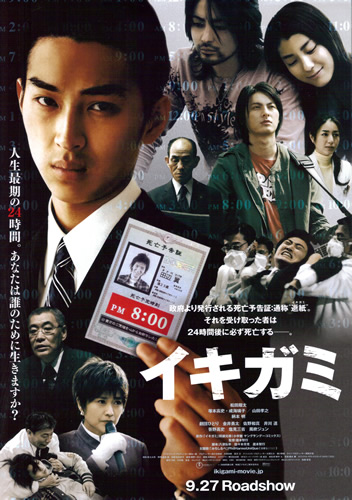 A place, somewhere, that bears a strong resemblance in history and environment to Japan. Its return to prosperity after defeat in war is due to a certain law, a pillar of the state. This is the Special Law for the Maintenance of National Prosperity. 24 hours before this capsule is to bring about death, an official of the Ministry of Health and Welfare brings a letter announcing impending death, an ikigami. Those who receive this ikigami letter have 24 hours of absolute freedom to do anything and everything they want. Kengo Fujimoto has made his way through university and taken a job with the Ministry. His work now is delivering these ikigami letters.

Dear Citizen: Thank you for your loyalty. You've no doubt noticed that the world is a troubled place. People are apathetic, lazy, unmotivated. You've probably asked yourself

WHY ISN"T ANYTHING BEING DONE TO STOP THIS SYSTEMATIC DECLINE?

Rest assured that measures are being taken. Beginning immediately, we will randomly select a different citizen each who will be killed within 24 hours of notification. We believe this will help remind all people how precious life is and how important it is to be a productive, active member of society.

Thank you for your continued attention and your cooperation and participation... 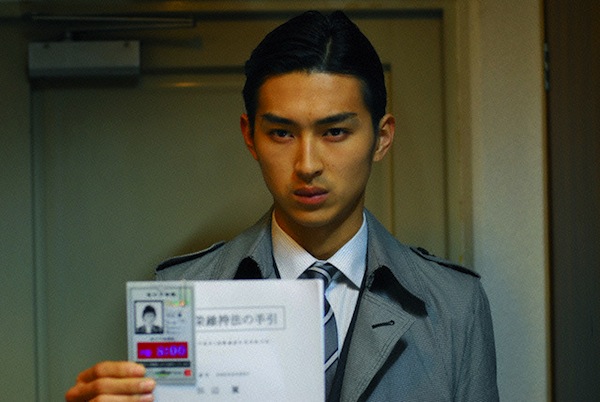 eri May 24 2016 2:36 am I dunno, I didn't think the film went into excessive melodrama at all--I came away with the opposite impression. I guess I'd say that I felt the technical melodrama you're pointing out is there for the sake of irony and it actually makes the film all the more fascinating. Like in the first segment, we the audience are actually observers of an audience feeling sentiments that can go in a bunch of different ways. What's the meaning of it? Our protagonist doesn't know. Is his supervisor's interpretation right? Is the kid's mom or best friend's interpretation right, or do they even know what to think? The media? Does the kid himself have time to know what the meaning of his last act is? Is he rebelling or proving the powers that be right? It's not black and white, and we find out as the story plays out that the meaning keeps changing. Same for the other segments. The film pushes back and forth on the meaning of it all, what's good? What's not? Even in the last segment, just as we're thinking we're supposed to have a 'melodramatic' moment, that interpretation gets taken away again. What should happen and what's the best thing for all? Is redemption really redemption? Who are the bad guys and the good guys? What would rebellion actually look like, and what would be the result of 'integrity'? That's the beauty of the film until the very last moment--back and forth, you have to question your interpretations and can't judge the story superficially. I thought it was really successful and satisfying, and that the story actually worked best in this medium--I think there's an excellent reason the manga wasn't turned into an anime. Also, I thought nearly all the main cast's performances were quite good and the storytelling was refreshing.

Ki Jul 03 2009 11:26 pm Geez talk about your uneven movie! “Ikigami,” based on a manga by Motoro Mase, is set sometime in the future with an oppressive big brother like government randomly killing off citizens in the name of bettering the nation. So far so good right? The film produced by television studio “TBS.” and like a lot of their movie productions, aims for the masses with the lowest common denominator. In a way, “Ikigami” takes parts from “Battle Royale,” “Sweet Rain” and “Death Note” and shakes it all together to make a film that easily draws you in, but just as easily makes you step back from the wretched stench of excessive cheese. The film does star popular young actor Shota Matsuda (from the TBS “Boys Over Flowers” drama series) and he’s flanked by well known co-stars like Takayuki Yamada (”Train Man”), Riko Narumi (”How to Become Myself”), and Takashi Tsukamoto (”Midnight Sun”).

In “Ikigami” new government employee Kengo Fujimoto (Shota Matsuda) begins his job as a civil servant. After passage of the “National Prosperity Law” the Japanese government has randomly injected one out of every 1,000 children with a lethal injection. Once the children reach the ages of 18 to 24 a capsule will then erupt inside of them killing them instantly. This is all done to make citizens value their life and work more productively. Now, Kengo Fujimoto sets out to deliver his first ikigami – a letter that informs the recipient that they have 24 hours left to live …

Well, the first 5-10 minutes of the movie seems promising. The film starts out with a brooding dark feel and a premise that piques your interest instantly. Once the movie introduces the first of its three main segments (the movie’s narrative style is similar to “Sweet Rain” where Takeshi Kaneshiro acts as the constant within three separate stories). the movie quickly goes into cheeseball territory and then some. During the first segment, concerning a street musician on the cusp of stardom who receives the ikigami, the movie quickly shows its television lineage by cranking up the melodrama to excessive degrees. The second segment, involving a mayoral candidate and her manic depressive son, gets even worse. Kazuma Sano who plays the disenchanted teen is just awful and the story doesn’t help with unbelievable lapses in logic. The worst moment occuring after the first gunshot is fired, where security guards are rushing towards the teen but suddenly vanish. Fortunately, the movie saved the best for last and the final segment, involving Riko Narumi & Takayuki Yamada, was the most affecting. Coincidently, this segment lacked the excessive cheesiness of the first two segments.

I have a feeling teens into anime and Japanese dramas will enjoy “Ikigami” a bit more than I did. The film did have appealing performances by Shota Matsuda, Takayuki Yamada, and Riko Narumi, but I just couldn’t get past the excessive cheese found in segments #1 & #2. I’m fairly certain I’ll have nightmares tonight of Takashi Tsukamoto crying uncontrollably while he strums his guitar and sings along with the TV.