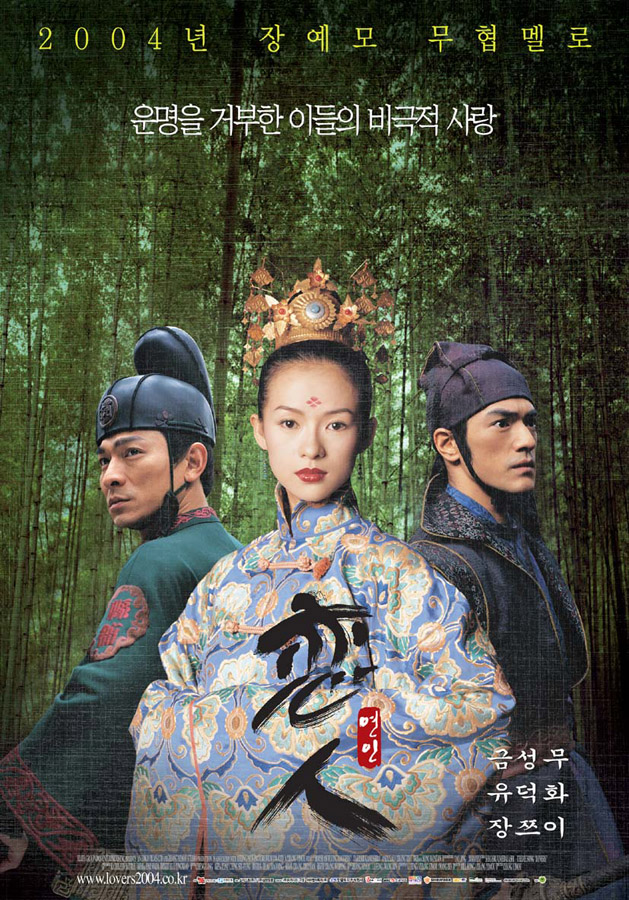 It is 859AD, and the Tang Dynasty, one of the most enlightened empires in Chinese history at its height, is in decline. The Emperor is incompetent and the government is corrupt. Unrest is spreading throughout the land, and many rebel armies are forming in protest. The largest, and most prestigious, is an underground alliance called the House of Flying Daggers.

The deputies are enraged because, even after they fought and killed the leader of the House of Flying Daggers, the House continues to thrive. Under the leadership of a mysterious new leader, the House of Flying Daggers grows ever more powerful. Feng Tian County’s two local captains, Leo (ANDY LAU TAK WAH) and Jin (TAKESHI KANESHIRO) are ordered to capture the new leader within ten days.

Captain Leo has heard that one of the new dancers at the Peony Pavilion, a local brothel, is a member of the House of Flying Daggers. So, he sends Captain Jin to the Pavilion undercover, to search her out. When the Madam (SONG DANDAN) presents Jin with Mei (ZIYI ZHANG), the beautiful new dancer, he is surprised to learn that she is blind.

Nevertheless, Jin goes forward with the plan – Mei begins to dance for him, and Jin pretends to be drunk and attacks her, trying to rip her clothes off. Leo then charges in, threatening to arrest both Jin and Mei for their indecent behavior. The Madam begs Leo to spare Mei, as she relies on her to bring in customers, and asks that he at least watch her dance before he makes a decision.

At Leo’s request, Mei performs an elaborate dance called The Echo Game, which reaches a stunning climax when Mei reveals herself to be a member of the House of Flying Daggers and challenges Leo with his own sword. Mei is an impressive fighter, despite her lack of sight, and the two engage in a fierce battle – but Leo eventually triumphs, and arrests Mei.

Mei is put through an interrogation, and threatened with instruments of torture, but she refuses to divulge any information about the House of Flying Daggers. The two Captains become convinced that Mei is the blind daughter of the Flying Daggers’ old leader, and are determined to get information from her, so they set up another plan. This time, Captain Jin will pretend to be a lone warrior called “Wind” and rescue Mei from prison, earning her trust and escorting her to the secret headquarters of the House of Flying Daggers.

The plan works, and the two set out into the forest, pursued by the deputies at every turn. Mei is suspicious of “Wind” at first, but when the two are caught in an ambush, and he uses his skills with a bow and arrow to swiftly kill four deputies and save her life, Mei begins to trust him.

When Mei and Jin leave the scene, and the deputies get up and remove the arrows from where they were lodged in their clothes, we realize this battle was staged for her benefit, but a long journey with real danger still lies ahead. As they travel through the forest, Jin and Mei begin to warm to each other. Before long, Mei has developed feelings for her enigmatic protector, and Jin is surprised to find himself falling for Mei’s headstrong charm. Both struggle to contain their feelings, but their desire is irrepressible, almost beyond their control, and they soon end up locked in an embrace. Still wary of each other’s motives, their suspicions keep them from letting it go too far.

Jin sneaks away to meet with Leo, who is worried that he is being taken in by Mei’s beauty and charm. Jin assures him, unconvincingly, that this is not the case, and returns to Mei.

The two are soon lost in another romantic moment – he is picking wildflowers for her in a field – when two soldiers sneak up on them. Jin tries to fend them off and protect himself and Mei by covertly explaining to the soldiers that he on their side, but they are not privy to Jin and Leo’s plan. More soldiers soon arrive to back them up, and Mei and Jin are forced to fight for their lives. Just when it seems as if all is lost for them, Jin and Mei are saved by the flying daggers of a mysterious stranger.

They are then able to turn things in their favor, and defeat the remaining soldiers. But when the battle is over, Jin is devastated – realizing that he is now caught between his loyalty to his comrades and defending his and Mei’s lives. Mei senses his sadness, and tries to comfort him with passionate kisses, telling him that she now believes he is “for real”. Worried for his safety, she tells him that he has done enough for her and that he should leave her on her own, but he insists on staying.

Jin sneaks off again to meet with Leo, eager to know why he was ambushed. Leo tells him that the soldiers were ordered by the General – that he has decreed that real blood must be spilt in order to draw the Flying Daggers out. Jin is crushed when he realizes how little his life means to those he serves, and the two men argue – both tortured by the mission they have taken on. Jin storms off, telling Leo that he is quitting.

When Jin returns to Mei, they argue as well, as she is suspicious about where he has been. The argument ends with Mei riding off on her own. Jin begins to ride away, but he can’t bring himself to part with Mei. He turns around and chases after her, with soldiers quickly closing in on her from the opposite direction.

Mei is trapped in the bamboo forest, valiantly fighting off a group of soldiers, when Jin arrives and joins the fight at her side. Jin and Mei struggle against the solders, and are close to defeat when the Flying Daggers – led by Madam of the Peony Pavilion – come to their rescue.

The revelations continue when Mei walks in and pours a cup of tea for the Madam without any hesitation, making it clear that she is not blind at all. Jin is devastated, and asks her if it was all just an act. She explains that she is not the old leader’s daughter, and is just one of the many girls in the House of Flying Daggers.

Meanwhile, the Madam takes Leo out to the bamboo forest, and just when it seems as if she is going to finish him off, she slices his ropes open with her sword and sets him free. She explains that she knows that the old leader planted him as a mole in the government, and that Nia, the new leader, appreciates what he and Mei have done for the Flying Daggers.

It is revealed that Leo and Mei had a relationship in the past, and this mission is the first time they have seen each other in three years. Leo is angry that he was forced to see the woman he loves seducing Jin. The Madam explains that they are facing an epic battle that will decide the fate of the Flying Daggers, and that it is not the time for romance. Nevertheless, she consents to let Leo see Mei.

Leo tells Mei how much he missed her and that he still loves her. She thanks him for saving her – it was his flying daggers that rescued her and Jin in the field – but, when he tries to embrace her, Mei pushes him away. When Leo asks if she loves Jin, and Mei doesn’t answer, the truth is clear to them both. Leo vainly tries to convince Mei that there can be nothing between her and Jin, but then becomes violent in his advances toward her. As Mei struggles to push him away, a dagger flies in and stabs him in the shoulder. Nia, the leader of the Flying Daggers, appears and tells him that she is sending him back to the government to continue spying. Nia tells Mei that she has a task for her as well – she orders her to kill Jin, as he is no longer of use to them. Mei takes Jin out into the field to kill him, but she cannot do it. She sets him free and they make love passionately in the grass. When it is over, she tells him to leave, but he does not want to go without her. She tells him that it is impossible for them to be together – that the next time meet, one of them will have to die.

Jin begs her to come with him, and they joke in hopeful tones about being together one day. At the other end of the field, Jin realizes he cannot bear to part with Mei, and turns back to find her. Jin discovers Mei lying in the grass, bleeding and close to death. As he holds her in his arms, Leo comes at him from behind. Jin is suddenly faced with the truth the Leo is not his comrade after all, but a member of the Flying Daggers, as well as his rival for Mei’s affections.

As the government soldiers advance upon the Flying Daggers, Jin and Leo engage in their own epic battle, one so fierce that the seasons change from brilliant autumn to cruel winter.

Jin is on the verge of defeat when Mei rises from the ground, kept alive by Leo’s dagger, which is preventing the blood from draining from her body. She tells Leo that is he kills Jin, she will rip out the dagger and kill him with it. Jin begs her not to sacrifice herself, but when Leo pretends to throw his dagger at Jin, Mei rips out the dagger and throws it at Leo, missing him when it bounces off a tree. Leo watches Mei die in Jin’s arms, with snow falling all around them.

G. Vander Sar Mar 18 2014 5:19 pm Amazing cinematography - esp. bamboo forest scene. The script is believable and the acting excellent. The characters are multi-dimensional - especially Mei's. Her final decision, in effect, to commit suicide at Leo's hand (flying dagger) presents an enthralling end to this film. By mounting up and attempting to follow Jin, her death becomes an inevitablability. Leo pretends to throw his dagger to finish off Jin, in order to make Mei pluck the dagger from her own chest and throw it - she then must 'bleed out'. She really did not think beyond the suicide, but Leo did return. Prepare for a real tear-jerker of an ending.

I was right there with them, pawns in a feudal nightmare.