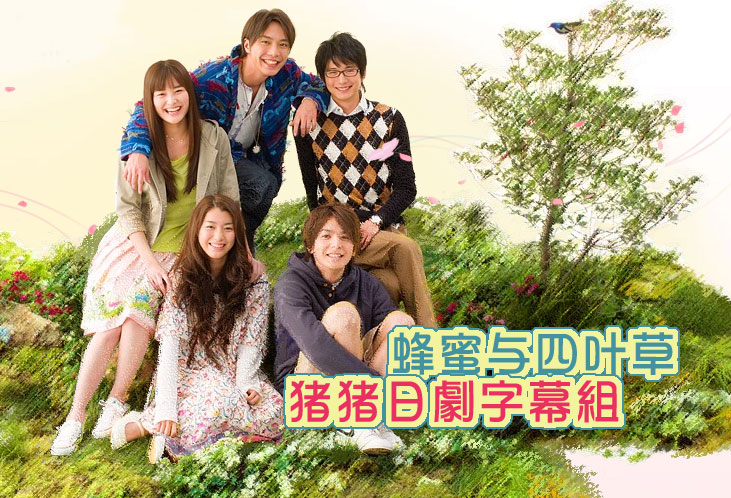 Hagumi Hanamoto has just moved to Tokyo to attend an art college. She is a genius painter but an extremely shy girl. One day in April, Yuta Takemoto, a junior majoring in architecture, spots Hagumi near a pond within the campus and instantly falls in love with her. She turns out to be the assistant professor Mr. Hanamoto's second cousin.

A few days later, Yuta's college hosts an art exhibition contest. The winning painting was a dynamic piece of work by Hagumi. Yuta's friend Shinobu Morita, a sculpture major, had been winning the contest every year. He takes one look at the painting and runs off. Yuta runs after him and arrives at Mr. Hanamoto's office. Shinobu finds Hagumi there and hugs her out of the blue. "It's been a while since I saw a painting that grasped my heart like that" he says. "I like your work too" she replies. Yuta is shocked to see the bond between the two. There's also Yuta's friend, Ayumi Yamada, who has a crush on classmate Takumi Mayama. But Takumi has fallen in love with Rika Harada, a designer who he works for part time.

"Honey and Clover" is based on the best-selling manga series and tells the story of the romance and campus life of these five friends.

Hagu chan Aug 18 2018 2:23 pm In comparison, the movie portrayed Hagu closed to her original character than the series. But if I have to choose between movie or series, I pick the anime. Morita is more KY in anime. p/s : I ship all of them

H&C May 20 2015 2:47 pm People shouldn't complain about this show without understanding the complexities of Morita's character. I'd recommend the anime/manga first then this drama. The anime/manga portrays the character more in-depth.

Anyway, the anime is one of my favorites of all time because of how relatable it is. To be lost, not knowing what to do - I know the feeling. The show is not about love, but how you grow up, lose your way, fall in love and in spite of everything, how you move on with your life. You can see the complexities in all of the characters. I can relate to Takemoto the most because I know how he felt most of the time.

Back to the drama, I really liked the casting first of all. Takemoto's actor portrayed him very well. It's a very good adaptation overall. Recommend it to everyone.

And, I ship Morita with Hagu-chan and Ayumi ^^

maias May 14 2012 9:24 am I like this drama, 'cause it's more real, real complicated love story and friendship, real life for achieving dreams but sometimes lost and having no destination... The ending is not happy ending for some character but once again, it's real... Well, actually I do wish that Mayama would end up with Ayumi:(

I love this Japanese drama version, even somehow it's slow and there's some boring part, but it's worthy watching... And I would like to see if there are Korean version of this drama..hehe. Please make it into Korean version!!:) and for the cast, I'll make some recommendation actor/actress: - Hagu : IU - Ayumi : Suzy/Jiyeon - Yuta : Yoo Seung Ho - Mayama : Kim Soo Hyun - Morita : Seulong/Lee Joon

japanlover Sep 04 2009 12:46 pm i like osamu mukai more when he wear spectacles...really want to watch his new drama,atashinchi no danshi with horikita maki.. i watch this series,although it's kind of boring..but i still watch it...i'm hoping for takemoto and hagumi also mayama and ayumi to be together at the end..but sadly they doesn't end up together!!! that's another point that i doesn't like about this series...dissapoint me a lot..but their friendship were good.. i still watch it till the end coz i like the cast..except shinobu..i hate him! he just came out of nowhere and interrupted takemoto's love story.. overall,it just ok for me..for those who love slow and touchig story..this series maybe suit your taste