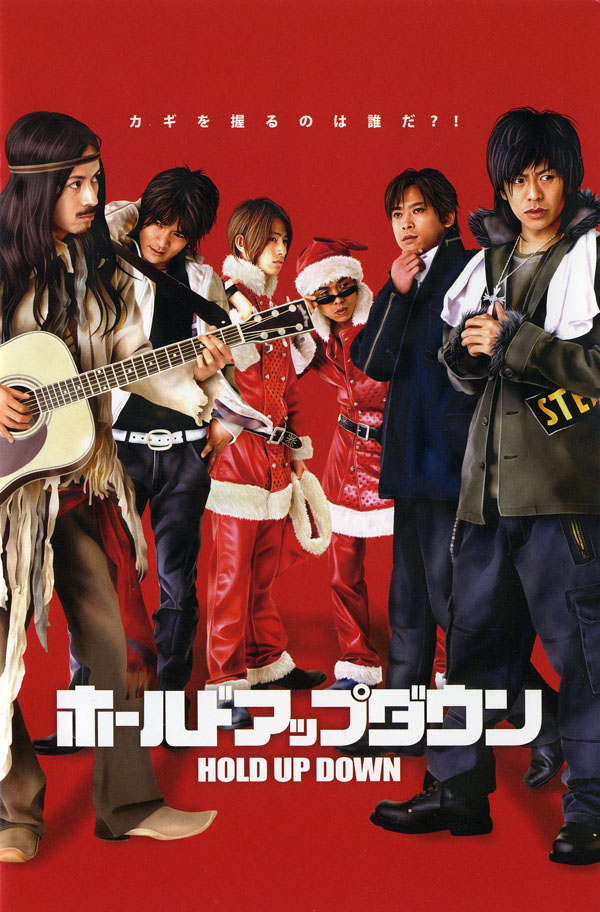 From cult film-maker Sabu, the director of the 2003 film Hard Luck Hero, comes yet an other wacky comedy caper, Hold Up Down (A.K.A. Horudo appu daun), which just so happens to star the members of the popular boy band V6: Sakamoto Masayuki, Nagano Hiroshi, Inohara Yoshihiko, Morita Go, Miyake Ken, and Okada Junichi! In the film, Inohara and Miyake join to take on the lead roles, playing Kimata Choji and Sagawa Yutaka respectively, a couple of hapless bank robbers, who make mistake after mistake in their bid to redistribute some wealth in their favor. One of the worst blunders ends up causing their precious get-away car to get towed right in the middle of the big heist! Dressed head to toe in Santa Claus out-fits, this not-so-dynamic duo decides to hide its cash "earnings" in a train station locker, only to discover that neither of them have the correct change to operate the locker itself! Along the way, the two thieves decide to steal from a near-by street musician named Sawamura Koichi (Okada Junichi), but to their complete surprise, he chases after them! Even worse, Hoshino Yusuke (Nagano Hiroshi) and Kiba Masami, two gung-ho police officers, decide to join the chase, along with Hiramatsu Masaru (Morita Go), a concerned citizen who becomes an interested party himself! Considering all this manic excitement, just how will it all end for these two Christmas-themed robbers? Find out in Sabu's Hold Up Down, an excellent ensemble piece for the famousr V6!

Mika Sep 28 2011 8:25 am Must watch movie, especially if you are a V6's fan like me! They will make you laugh until you get stomach ache! Interesting story by Sabu & great acting by V6.