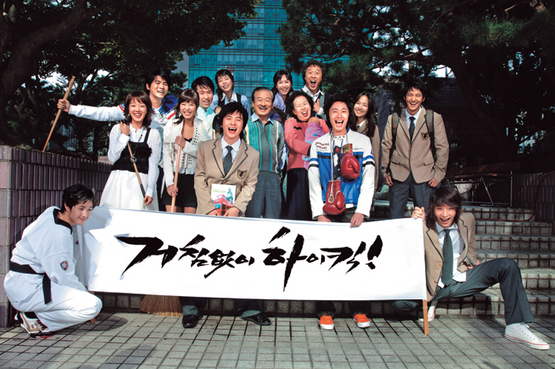 Lee Yoon-ho (Jung Il-Woo), a motorcycle mania who engages in many fights at school and is known for his high kick, and Lee Min-ho (Kim Hye-Seong) who enjoys spending time on scale models and web blogs, are brothers born a year apart but attending the same class at school. These two portray completely opposite Korean teenage characters in a comical way. And of course, there’s the rest of the family. Their father Jun-ha Lee (Jeong Jun-Ha), a full-time stock investor since being laid-off from work, nevertheless optimistic and reckless; their mother Park Hae Mi (Park Hae-Mi), an oriental medicine doctor and always overly confident; their grandfather Lee Soon Jae (Lee Sun-Jae), who loves money more than anything in the world; their grandmother Nah Mun Hee (Na Moon-Hee), who is always defeated by her daughter-in-law in ongoing status quarrels, are some of them. Their uncle Lee Min-yong (Kim Hye-Seong) is a 27-year-old single dad. After going through a premature marriage and early divorce, he enjoys his life back in the dating scene with his half-single and half-married status, while continuing to encounter emotionally-involved moments with his ex-wife Shin Ji at times. Smooth High Kick! is a situation comedy, which portrays the everyday lives of the main characters colliding with each other in a comical way. However, at a certain point, the surprising mysteries of their seemingly-normal surrounding characters begin to unravel one by one.

KST Dec 30 2022 7:17 am I just finished watching this long series. Actually I started to watch this in the January this year and but I could finish it only today.LOL! This drama was really full of comedy and relationships. I saw how some popular actors like kim bum, Jung il woo ,Park min young have acted in their early years in this this drama. Specially kim bum and park min young were experts in acting from those days till now. The cast was really impressive. I really enjoyed all most all the episodes. Anyhow while watching this series I felt sorry about both Shin ji and Seo min jeong because they both love Lee min young. Lee sun jae and Lee jun ha and also Park hae mi and Na mun hee 's characters were really good. I really love to this situational comedy very much. Hope to watch season 3 of the High kick too because some are said that high kick 2 is a bit boring. I saw the cast in season 3 of High kick and hope it will entertain me. I will definitely miss Lee family! Saranghae!!! Pogoshipoyo!!!

Park Min Dec 08 2022 8:18 pm Great comedy full of laughs and good time. Even though it's mid 2000s but the comedy still holds up to date. I wish there was a few more characters for some more variations. I was seriously fed up with Lee Min Yong relationships, it's the weakest and the longest plot line in the drama. Choose this girl or the other I don't care anymore. Too bad Seo Min Jung doesn't act in more dramas or movies, I wanted to see more of her. Don't watch the old copy online, get it from Amazon Prime the quality is pretty good there.

Zachary K Spriggs Feb 13 2022 2:17 pm Trying to find this show on DVD with international shipping to America but I can't find it anywhere!

Hai Nguyen Oct 27 2021 12:39 pm Does anyone remember the episode with the scene that Min Yong saw Shinji waiting in the bus station from afar, he felt sad but couldn’t do anything. Loved that scene so much but can’t remember which episode

kdramafan May 24 2021 7:47 am epi 65 i am about halfway and enjoying so much this drama this is my first sitcom in kdramaland and i become a fan but i am also very sad cz this was the very first drama for seo min jung and shinji i loved them so much in this drama and couldnt get enough from them so i wanted to watch them more but they didnt do anything after this one they were really promising actresses with a very good future but they completely disappear and i wanted to know what happened to them and why they have to quit

ondubu Mar 31 2021 5:36 am @Rachel because in Korea siblings tend to have the same ending sylabble on their name. For example MinHo and YunHo they have the same HO syllable at the end of their name.

Sherry Jan 07 2021 2:33 am I really love this sitcom, but the ending is not what i expected. whyyyyyy did Lee min yong did not end up with seo min jung, i ship them very much and i get frustated towards the last episode.

Rachel Mar 05 2020 7:28 am hello, i have finished watching the 3rd season and now I am watching this one. Can somebody explain to me why Jung Ilwoo and Kim Hyeseong did not use their real names here? I understand that Park Minyoung did not use her name because of Choi Minyong's character. But for Ilwoo and Hyeseong even their first names were not used.

tsinj Dec 28 2017 12:52 am I am looking for an episode that Lee Soon Jae slaps teacher Lee because he doesn’t take care of his son Jun at hospital!

Stuffs Nov 11 2012 7:10 pm So. . . the "plot" gave character synopsis but not plot synopsis, the episode synopsis isn't actually what it says (really more of an episode opinion), and more than half the videos on AsianWiki stopped working sometime last year so no info there either.

What the Hell is this about?!

All I can tell you from everything I've read is it's a family with problems (so is 90% of TV shows so that's not helpful) and apparently the only reason the series is called "High Kick!" is because. . . a character in it can. . . do a high kick? o.0

I miss the days when people knew what they were doing.

agreechan May 20 2012 5:08 pm anyone know about the 4 special episode the story about what? the story oftheir life after that or something else?

Maria Mar 08 2012 4:41 pm I have now finished it. I wont lie - ... I cried... not because it wasn't a good ending. I'm truly gonna miss this family, cheered me up when I was down. This is deffinetly my second favorite show of ALL times, it comes right after Secret Garden. If anybody who reads this have seen Secret Garden, you will know that second is a good score :D If you are thinking of watching this or doubting that this is any good, you should deffinetly watch it, even though it seems long, you will enjoy every bit of it. Please do watch this, for you own entertaining :D

high kick lover Sep 21 2011 7:10 pm NONE of the High Kicks will be able to out do the Original and GREATEST Classic from the Start Just Amazing all of the others are riding off the Fame of this one was BRILLIANT