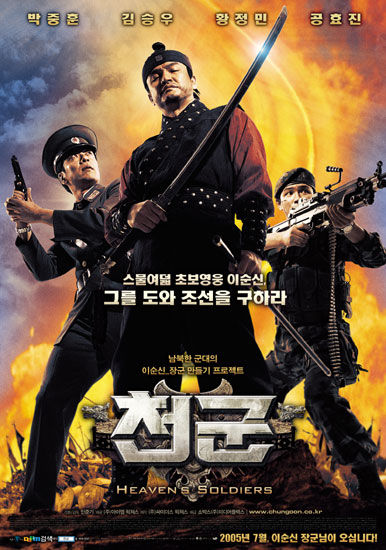 According to the movie, by 2005 the North and South Korean governments have secretly joined forces to create a nuclear warhead, and when the leaders of both nations decide to hand over the nuke to the American military, North Korean officer Kang Min-gil (Kim Seung-woo) goes rogue and hides away with the nuke along with nuclear physicist Kim Su-yeon (Kong Hyu-jin, “Volcano High”). It’s up to South Korean Navy Officer Park Jeong-wu (Hwang Jung-min, “A Bittersweet Life”) and a team of commandos to retrieve the scientist and the warhead, but during a heated firefight, the nuke, the scientist, and both groups of soldiers are swept up in the wake of a passing comet (don’t ask) and dumped into the late 1500s — right in the middle of a battle between Korean peasants and marauding Chinese barbarians.

The extras included a visit and talk about the Admiral at his museum in Korea, unfortunately that was not translated into English, though the film was with Eng subs.