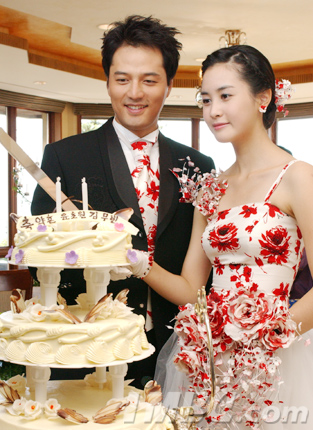 This drama talks about what 'fate' is, and twists and turns of life and the beauty of love and sacrifice through those who strive to overcome that 'fate.' Cho Won, brought up in a not so well off but lovely family, meek and amiable, is engaged after a quite short period of dating to Jung Soo, the son of Hang Ja Joo who has just returned to Korea after studying abroad, thanks to the two families' intimate relationship, Slowly shamanic spirit approaches Cho Won, who, as a beautiful and talented graduate student, is awaiting a rosy future of marriage life with a smart bridegroom from a rich family. One day, she goes to a nightclub with her friends, and faints when she recognizes ghosts on big speakers while dancing. Her friends assure her that she must have mistaken something else for ghosts, but from then on, she loses her appetite and gets increasingly exhausted, symptoms that even doctors don't know the reason for. Cho Won, who has dismissed the symptoms as those caused by a mere headache or fatigue, happens to visit a shaman named Yong Hwa Boo her friends introduced out of curiosity for she has to write a paper on shamans. Cho Won's family learn that her aggravating symptoms are due to her shamanic spirit, and they are frightened. Then, does it mean that Cho Won, a founding, is destined to be a shaman? Without informing Cho Won of this, her family have a discussion over this issue and at last her grandfather, Baek Kwang, decides to oust her from the family. Because of the love that they gave her while raising her, her father, Moon Hak, and her mother, Shi Ae, oppose the decision, but because of the firm stance of Baek Kwang, a former legal professional who doesn't want his family image tarnished, the couple unavoidably accepts his decision, breaking into tears. Cho Won's parents rent a room for Cho Won with the money they have saved. Thanks to Baek Kwang's strict order that Cho Won leave home as soon as possible, the family of her fiance Jung Soo notifies her of its decision to break off the match. She loses her family that she loved so much, her aunt and grandmother, the perfect man, Jung Soo, and even her health. She is on the verge of giving up her life as she has lost everything overnight.

amy Apr 30 2011 9:33 pm i am having a devil of a time locating the entire heaven's fate dvd with english subtitles. can anyone out there help me????????i started watching around episode 30 and would like to watch it from the beginning. i miss cho won and mu bin.

amy Apr 30 2011 9:24 pm oh, how i wish arirang would repay heaven's fate.(started watchng around episode30) i loooove cho-won and mu-bin. i've been trying to locate the entire series with english subtitle. the video stores in santa clara, california does not carry it. please, can anyone tell me where i can purchase one. i'm going thru withdrawls!!!!

mawi Apr 08 2010 7:08 am hi i'm mawi one day my mother was checking arirang and she saw this heaven's fate and she called me and for tht day we start watching this serial and it is a very nice story which talks about fate and this serial is a very touching story and it makes me cry sometimes

dramacrazy Mar 15 2010 8:54 pm so now that it's daylight savings they KICU 36-2 in California has changed programming and the series has disappeared! Where can you find this online??!!

Lucille Mar 07 2010 2:52 am I really really really love watching heaven's fate. My problem now is that i missed lots of the episodes 'coz of my shedule. Please where can i get a complete episode dvd or any website to go to to watch the episodes.Plsssssssss

twiggs Feb 19 2010 7:17 am hi there any one can help me? i miss a few series i wanted to watch it again where can i watch it? any website? pleas... i'm so desperate how i wish this could be shown in philippine tv... either abscbn or gma...

Elisabeth Feb 15 2010 7:57 am I have been watching Heaven's Fate and found the grand-mother & mother treated the daughter wrongly. Being shaman they pursue ChoWon to get into their ritual way. Poor innocent girl who believes that her destiny has chosen to follow the mother's path. She left her lover MuBin in a miserable situation for the inexisting spirits. Can someone tells me herfound answer after being a way 1 year for praying. Will we see a happy end story between Chowon & Mubin?. Appreciate for your answer.

naomi Feb 13 2010 7:03 am hey seoulsista! in the episode you missed, mu-bin is told to speak to Cho-won in her private room (where she worships). she asks him to leave her alone and forget about her. later on, she leaves the city to go and pray in the mountains in search of an answer.. perhaps to know if she is destined to be with mu-bin or not.. currently, it's been a year since she left, and mu-bin is still pining for her. meanwhile simong had ceased to go out with Mr. Bu

seoulsista Feb 12 2010 1:16 pm Yikes! I missed an episode and can't find it online! What happened in the episode when Mu-Bin showed up at Cho won's new apartment with her shaman mother and uncle after not seeing her for a while? Does anyone know a site that has this series? thanks--

Tshetrim Zam Feb 03 2010 5:40 am Hello! i am a Bhutanese gal who have recently joined the family of arirang and have got a chance to watch such a fantastic drama called heaven's fate. While i was studying overnite i suddenly put my channel to arirang and from that i never missed an episode. The artists are all adorable and esp. i admired Mu-bin's love for Cho-won and Jeong-su's care for Mi-Yong, n i wander if it happens in the real life rather than in reel life. Anyway this is the only serial dat i am ready to sacrifice my time and meal...n study hours too.

Kathleen Wrobel Dec 30 2009 9:45 pm There is contract dispute with Chicago, IL .. as a result, we no longer enjoy the dramas we once did. I did begin watching Heaven's Fate and we're now into episode 90-something.

Who's that little girl who keeps showing up? I help to moderate our fan board and I wish I could define her presence. Heaven's Fate began running in Chicago sometime in October 2009. I would sure appreciate some background on that little girl. Cho-won's birthmother flatlined at the hospital in tonite's episode. It's so hard to pick up on plot lines when you start at Episode 70-something. Thanks for any light you can shed.

Arer Dec 02 2009 4:15 am i love this drama, before I've been looking/searching where can i watch/buy a DVD of this drama. But thanks to Arirang for airing this wonderful drama. All the characters are so watchable and all the actors are so great. Especially Lee da hae she is so versatile actress she can easily switches her emotions. I like her acting here its so credible. Chuwon is so pitiful. But thanks to Mun bin, he is always at her side. I wondered why MBC didn't released a DVD with english subtitle???

Lu Ao Sep 29 2009 8:47 pm Greetings. Where can I purchase a copy of the whole series on DVD? Because I love the characters, the witty script and actors and their portrayal of the characters.

I look forward to receiving some responses.

MoviesWeHaveWatched Sep 03 2009 7:34 pm This sounds like one wack plot