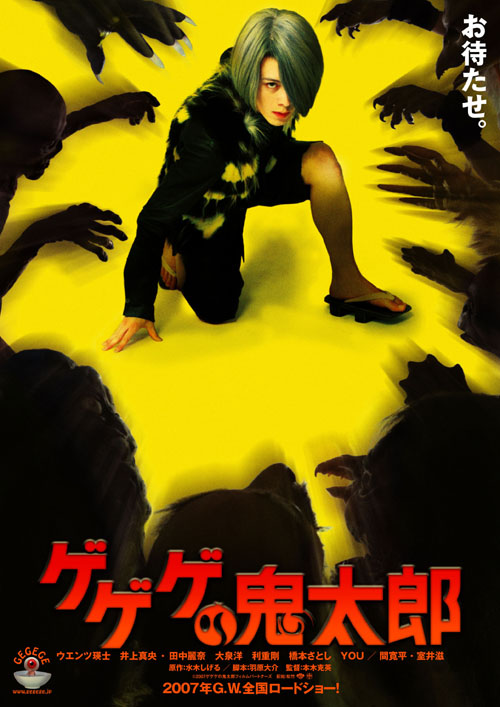 Kitaro is half-human and half-yokai (a general term for creatures and supernatural beings), orphaned as a child and dedicated to keeping the peace between the human and yokai worlds. Kitaro tries to save a high school girl named Yumeko and stop a stone with the power to control both worlds from falling into the wrong hands.

Mizuki Shigeru’s beloved manga series Gegege no Kitaro has seen numerous small and big screen adaptations since the 1960s, but this latest 2007 film is without a doubt the most visually stunning effort yet. Directed by Motoki Katsuhide (Drugstore Girl) with a screenplay from Habara Daisuke (Hula Girls), Gegege no Kitaro is set in a delightful world populated by Japanese folklore creatures called yokai, demon spirits with supernatural powers. Yokai come in many shapes and forms and the film brings them to life in a fanciful fusion of CG, animation, and live-action, with everything from cat spirits to walking eyeballs roaming through ancient forests and modern Japan. The special effects were handled by Centro Digital Pictures, whose previous credentials include Kill Bill, Kung Fu Hustle, and Shaolin Soccer. Equally impressive is the cast, with Wentz Eiji of WaT, who proved his acting chops in Captain Tokio and Lovely Complex, stepping into the title role of Kitaro and Inoue Mao (Hana Yori Dango) playing his human love interest, a new role written especially for the film. They appear alongside an all-star line-up that includes Oizumi Yo, Tanaka Rena (Waiting in the Dark), Nakamura Shido (Be With You), You, and Koyuki (The Last Samurai).

In modern-day Japan, the worlds of the human and the yokai often collide, and usually not in the most pleasant of manners. Half-human and half-yokai, one-eyed Kitaro (Wentz Eiji) lives in Gegege Forest with his bickering friends Nezumi Otoko (Oizumi Yo) and Neko Musume (Tanaka Rena) and his eyeball father, and he dedicates his time to maintaining peace between humans and yokai. When a magical ball of power ends up in the wrong hands, Kitaro must recover it or both worlds could fall into grave danger.