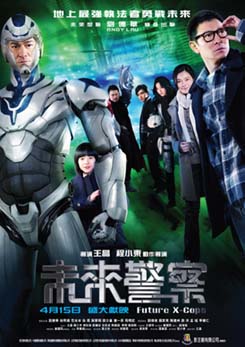 Kidd (Andy Lau) a police officer from the year 2080 and his wife Millie (Fan Bingbing) are summoned to protect Dr. Masterson (Jingwu Ma), who is known as the "Father of Solar Energy" due to creating a cheap method to replace fossil fuel with solar energy. Because of Dr. Masterson's creation, oil tycoons have made several attempts on the life of Dr. Masterson. The Special Force of the police department has received credible information that an army of humanoids (half-man/half-machine) led by Kalon (Louis Fan Siu-Wong) & Fiona (Yifei Tang) are set to ambush Dr. Masterson at the Convention Center.

At the Convention Center a fierce battle ensues that leaves Kidd's wife Millie and all of the humanoids dead, except for Kalon & Fiona.

The oil tycoons then steal the secrets of time travel to send revamped 2.0 versions of Kalon & Fiona to the year 2020 to murder Dr. Masterson when he was a 12 year old kid.

The government learns of the oil tycoons plans to go back in time and this is when Kidd volunteers to have radical surgery to transform himself into a bionic man with mechanical arms and legs. He then travels back to 2020 with his daughter Kiki, who will go to the same school as the young Dr. Masterson. Kidd works as a police officer in 2020, to avoid suspicion of his background, while fellow police officer Holly (Barbie Hsu) becomes attracted to Kidd. Knowing he will go back to 2080 after his mission is complete he is unable to return Holly's affection for him.

A fierce show down with the androids Kalon & Fiona is then set to occur ...

lol May 28 2013 7:58 pm lol, description and comments cracked me up, will watch anyways just because there seems to be a few hot gals in there

mrmz Oct 01 2011 11:38 pm sounds like there's too much going on!! plus a mix of too many movies... terminator, transformers, and this old cop movie i saw as a kid :P If you try to become everything, you don't become anything I think if this same idea was made into an animated movie, it's be better